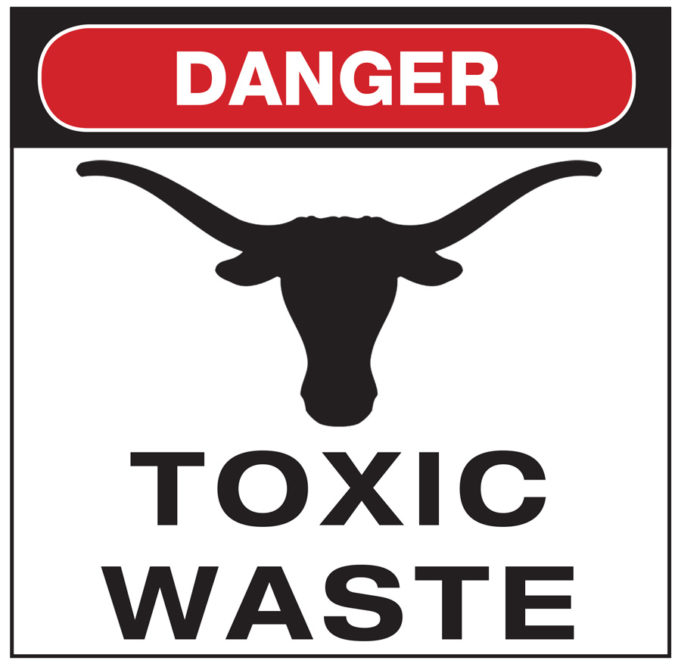 Unless you’ve been living in 1954 like some Republican lawmakers this past week, or are just really into the Olympics, you know that UT and OU are reportedly close to finalizing their exit plans to join the SEC. It wouldn’t take you more than a cursory Google search to find hundreds of prognostications of what that means for the remaining Big 12 — which have been only 10 since 2012 — teams. The foreseeable fate of the remnants, including our hometown Frogs, is about as reliable as playing the lottery numbers from a fortune cookie. Any concrete changes wouldn’t take place until next season at the earliest, so for now, let’s discuss another facet of the potential moves that threaten to further shake the foundations of college football as we know it. Texas is toxic.

We all have a friend, maybe multiple friends, who stick out a bad relationship. Sometimes it’s because the offending partner is really good-looking, or the couple have been together for ages, but most often a boatload of money is the culprit. In the case of UT, they’re the abusive spouse, and their on-field looks are average at best, but an enormous bank account can bring amnesia of all the bad times. For all intents and purposes, the current state of our conference is because of the capital dwellers. The exodus of Texas A&M, Nebraska, Colorado, and Missouri is largely the fault of the burnt orange and their self-aggrandizing television network. Nothing is ever enough for that college in Austin, and a move to the SEC won’t be either.

It’s not about money, but that will be the most commonly parrotted argument justifying the move. Each SEC member is estimated to rake in a cool $16 million more each season once the Longhorns and Sooners join the fray. But what is money? UT prints the stuff, and they already have and have had what I call F-you money, so feel free to throw frozen flank steaks at anyone who hurls that tired trope at the barroom table when discussing the most valuable college football brand.

The SEC is a more competitive group. Truth is truth, though I maintain that the league of cousin-lovers is top-heavy with teams like Alabama, Georgia, and Florida and down the line aren’t nearly as good as pundits and pom-pom wavers scream to convince the rest of us. Oklahoma opting to join a more competitive league is one thing. They’ve won the Big 12 for six consecutive seasons and seven total times since the group shrank to its current size, but Texas is something else. The Longhorns’ average conference position is 4.5 after the nine seasons since the downsizing, and the phrase “Texas is back” is a perpetual joke among national college football commentators. UT have never earned, or been close to earning, an invitation to the four-team playoff. Besides OU — who have gone to the semifinals thrice and lost all of them to would-be losers in the championship game — no one in our league besides Baylor and TCU have gotten close.

I’m happy to admit something to my readers that my circle of friends already knows: I’m no businessman. If Texas is dead set on leaving the Big 12, there are good reasons that make sense for the university. While recently giving his opinion on this potential move, Colin Cowherd even referred to former TCU athletic director turned Longhorn head honcho Chris Del Conte as the smartest guy at his job in the nation. Conversely, there’s something that all burnt orange beef fans, alumni, and boosters have to admit if they indeed jump to the SEC: Texas wasn’t good enough. If the Big 12 sucks and the Longhorns don’t want to play in a league that’s been on life support since 2012, then the fault lies squarely in Austin. No school’s program is worth more money or has a bigger cache. Orange fans will forever forfeit the right to chide the Aggies for jumping ship when they were irrelevant in our state anyway, because now Bevo will have pulled the same cowardice by crawling into the Deep South with their Horns dragging in the dirt with a pathetic war cry proclaiming, “Let us in, please! We promise we can help you all make more money.” Not surprisingly, the only SEC members that seem to be balking at accepting another T school donning ugly orange are former conferencemates TAMU and Mizzou, who both know that sometimes money isn’t worth living in a toxic relationship.