It’s time for another music video premiere, this one from veteran singer-songwriter Denver Williams. The frontman for the psych-rock group Chillamundo is releasing his first full-production solo record, The Blooming Eye, in December. The first of the album’s five songs, “Cement and Plastic,” will be available for purchase tomorrow. The veteran singer-songwriter let the Weekly premiere the accompanying music video for “Cement and Plastic.”The video was shot by Jessica Waffles in New Mexico, Oklahoma, and Texas, Williams told us, and the final footage was edited by Williams’ production company, Slab Factory. The images, Williams continued, make for a hallucinogenic cowboy deep-dive set to Texas psych-pop sounds. 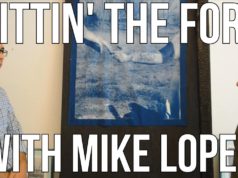