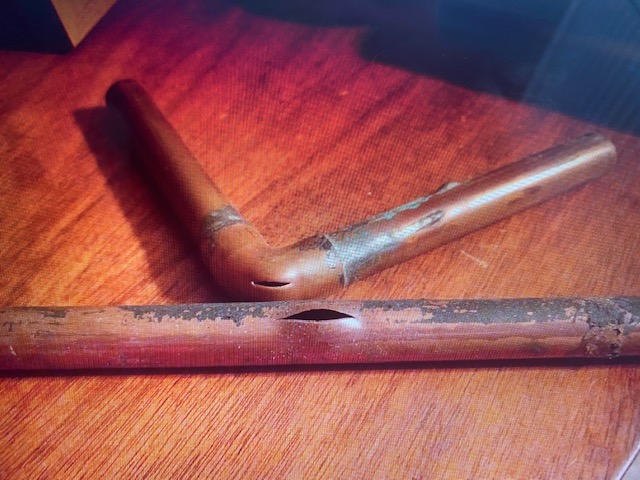 I keep two copper pipes on my chest of drawers. The plumber gave them to me after replacing them six weeks after they froze and burst last February. I keep them so I’ll never forget how the Republicans in Austin don’t care about average Texans like you and me. They deserve full blame for ERCOT’s sucky status quo that benefits the wealthy few but that left most of us freezing inside our homes last year. If we’d been connected to an electrical grid outside of Texas like El Paso, most of us wouldn’t have faced the long blackouts, frozen water pipes, and interminable hassles with contractors and insurance companies.

And, no surprise, with incompetent Republican governance, here we are more than one year later, and nothing’s really changed. In fact, Gov. Greg Abbott and his cronies actually have the gall to ask us to keep our thermostats at 78. In Texas. In the summer. The mini-reforms the state government has pushed won’t prevent more blackouts or a redo of 2021’s Valentine’s Day snowstorm, and this, after an estimated 702 Texans died.

Today’s Texas GOP isn’t interested in fixing anything. Besides running a protection racket for Big Energy that guarantees it little oversight and regulation, Texas Republicans are only interested in one thing — politics as performance art to keep their always riled-up base outraged about yet another made-up Faux News culture-war battle. And how about we finally call “culture war” what it really is: bullshit.

And the b.s. is hip-high in the governor’s mansion these days. Abbott’s anti-immigrant stance is hemorrhaging money out of the state budget and our pockets. His searching of trucks at the southern border has cost our economy $9 billion dollars. Plus, it caused Mexico to change a rail route from Texas to New Mexico, which will end up costing Texas billions more dollars. Way to go, Greggy!

Also, the governor’s ongoing political publicity stunt of calling out the Texas National Guard for long-term deployment at the border will cost Texas $2 billion this year. And as The Texas Tribune showed in a recent expose, all of this increased funding did nothing to stop migrants or catch drug smugglers. But it’s not really designed to. It’s all just political theater.

Once we called ourselves The Friendship State, but now under Republicans, we’ve become The Scapegoat State. Immigrants, the homeless, teachers, and trans parents and their children are the latest caught up in the GOP’s hate/fear-fest. It’s disgusting and dangerous, as the mass shooting in Uvalde underscores. Those engaged in it should be ashamed of themselves, but I doubt they are. They, like Tucker Carlson — the popular host of The Neo-Nazi Hour on Faux News — have learned that hate and fear are the prime motivators of the Republican base.

The problem is that once you start hawking that toxic mixture, you can never stop. All you can do is up the volume each time. I’m sure at this very moment, Abbott is studying Ron DeSantis, wondering which giant corporation the Florida governor can inanely accuse of “grooming” children or being too “woke.” As a native Texan, I feel confident that if there’s a race to the bottom, Texas will surely find a way to beat Flori-duh for the most moronic policies in the country.

I expect any day Abbott will ask his attorney general to sue President Joe Biden’s “socialist” government because it won’t add a work requirement to Texas’ WIC Program. I can just hear the governor going full-Trump/tough guy mode on how Black and brown babies need to get off welfare, go to work, and learn to get off the government teat, so to speak.

And as if we needed another reminder we live in dystopian Texas, along comes the Uvalde massacre, where the children’s bodies were so mangled by an 18-year-old’s military-style killing machine — which he had no business owning — that the authorities had to obtain DNA from the families to identify the grisly remains. Under Abbott, Texas has more than 4,000 gun deaths per year. His solution? To play to the pro-mass-shooters-death cult of the NRA and make access to firearms ever easier, which only makes another Uvalde — or Santa Fe or El Paso or Sutherland Springs — that much more likely to happen and all our children and grandchildren less safe.

Texas Republican governance is not conservative government. It’s incompetent government, wasting billions on political stunts, but it’s worse than that even. If we don’t rid ourselves of the toxic concoction the GOP has become, we’ll not only fail Texas but Democracy 101. As old-school GOPer Steve Schmidt recently wrote, Trump’s Republican Party is “corrupt, indecent … immoral … [and] a danger to our democracy.”

It is the party of abject failure when it came to COVID, the party of violent insurrection, the party of white supremacy and crazed conspiracy theories, and the party of shame for endorsing the totally unbelievable lie that the worst jobs president since Depression-era Herbert Hoover actually won in 2020.

As the great John Lewis said, “The vote is precious.” It’s the super-power we need to stop those who are suppressing our ballots and actively trying to take away our rights. With the leaked Roe opinion, we know that not only is abortion on the chopping board but gay and interracial marriages are, too. We Texans are uniquely positioned to stop the American Taliban from imposing its religious dictates on the rest of us and elect sane, non-bought politicians who will vote for common-sense gun safety laws, among other things. If Texas, the most populous red state, can become even a little bluer, everything could change. Republicans nationwide would be forced to compromise and act like a normal political party again instead of a bizarre cult beholden to a wannabe authoritarian.

This column reflects the opinions of the author and not the Fort Worth Weekly. To submit a column, please email Editor Anthony Mariani at Anthony@FWWeekly.com. Columns will be gently edited for factuality, clarity, and concision.