Chiso Manche (NR) This Nepalese drama stars Swastma Khadka as a woman who travels the length of the country to retrieve the body of her husband, who has been killed in the Middle East. Also with Arpan Thapa, Deshbhatka Khanal, Aashant Sharma, and Jhaken BC. (Opens Friday at Cinépolis Euless)

The Phantom of the Open (PG-13) Mark Rylance stars in this comedy based on the life of Maurice Flitcroft, the English dock worker who shot the worst round in the history of the British Open. Also with Sally Hawkins, Mark Lewis Jones, Ian Porter, Jake Davies, and Rhys Ifans. (Opens Friday)

Press Play (PG-13) Clara Rugaard stars in this drama as a woman who discovers a mysterious mixtape that can transport her back in time. Also with Lewis Pullman, Christina Chang, Lyrica Okano, Kekoa Kekumano, and Danny Glover. (Opens Friday at América Cinemas La Gran Plaza)

Bhool Bhulaiyaa 2 (NR) The sequel to the 2007 Indian horror-comedy is about two strangers (Kartik Aaryan and Kiara Advani) who discover supernatural goings-on at a music festival. Also with Tabu, Rajpal Yadav, Amar Upadhyay, and Sanjay Mishra.

Lightyear (PG) If you ignore its connection to the Toy Story series, the latest Disney/Pixar animated film is a surprisingly generic space adventure, though it’s done pretty crisply. Chris Evans provides the voice of the intrepid space explorer who undertakes adventures over the course of 84 years to try to get his crew home after he accidentally strands them on an alien planet. His travel at the speed of light allows him to maintain his age through those decades as his friends all live natural lives and die, and this Pixar film doesn’t shy away from the grim implications of that. Still, this film is missing the usual wit and cleverness that we expect from Pixar. It moves Buzz Lightyear and his fellow space travelers efficiently in and out of danger, but something has gotten lost. Additional voices by Uzo Aduba, Keke Palmer, Peter Sohn, Dale Soules, Bill Hader, Isiah Whitlock Jr., Efren Ramirez, James Brolin, and Taika Waititi.

Watcher (R) First-time filmmaker Chloe Okuno shows some intriguing talent for slow burns in this thriller about an American former actress (Maika Monroe) who moves to Bucharest with her Romanian husband (Karl Glusman) and thinks that her neighbor across the street is watching her. The unfamiliar setting makes an effective backdrop for a heroine who’s left alone by her husband for long stretches and doesn’t speak the language. Unfortunately, Okuno’s approach works less well in the story’s violent climax, and Monroe is catatonic when her brain should be working in overdrive. Still, this feels like the work of a talented director who will make a better movie in the same vein, or at least deserves the chance to make it. Also with Burn Gorman, Mȃdȃlina Anea, Gabriela Butuc, Florian Ghimpu, Flaviu Crisan, and Cristina Deleanu. 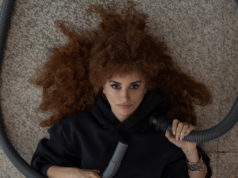