Derek Harper has a deep voice. It no doubt makes him sound more authoritative when he analyzes Dallas Mavericks games on Bally Sports Southwest and in his role as host of a newly-launched podcast. Over this past month, he’s been to Fort Worth multiple times using that voice to convey the wisdom of the 17 seasons he spent in the NBA to young basketball campers. 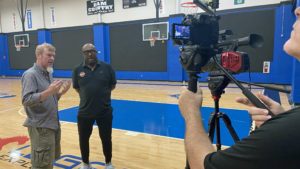 He told them to “stay down” on defense, urged them to rebound the basketball, and at one point explained how a shot fake after a drive to the basket can get ambitious shot blockers to leap too early: “Go to the cup and when you get in there, just a little ball fake and all all them birds gonna fly.”

He also used his voice to talk a bit of smack to his friend and former Mavs teammate Morlon Wiley. They give each other a jovial hard time, with Wiley pretending to eject Harper from just about every clinic. The one-day camps were facilitated by the local chapter of the National Basketball Retired Players Association, with former NBA, ABA, and WNBA players (including Jimmy King, Willie Davis, and Genai Walker) in attendance. Members of the Fort Worth Police Department also coached and counseled the young people at the Boys and Girls Club on Cowtown’s east side. Academy Sports + Outdoors donated basketballs.

The cops attend to help the kids learn, and also to build rapport that can translate to improved relations in the neighborhood. And indeed, it is off the court that Harper hopes his voice has its biggest impact. He asked the kids about their education, touched on the importance of making good decisions, and suggested they “make some new friends.” As every coach does, he certainly relished encouraging boys and girls with demonstrable skills. But in the video interview that leads this post, he talked about the importance of also working with the less-accomplished young people to help them find their own voices in the world.