Although we have made considerable progress since the Trojan War, there are many ways in which we are still sacrificing virgins to keep the demons at bay. And when I say “virgins,” I mean the illusion of virginal purity in hot young blondes (Marilyn, Anna Nicole, Britney) or “bombshells” as they have seemingly always been known. And when I say “demons,” I mean the patriarchy. Indeed, the patriarchy has a thing for blondes, and that thing is the exploitation of them until their sell-by dates, which, of course, is typically around middle age.

The Hulu series about the ill-fated romance between model/actress Pamela Anderson and Mötley Crüe drummer Tommy Lee is a neon showcase of this particular sacrificial blonde phenomenon that was most rampant in the early ’90s. That’s when girly, nonthreatening blonde women like Anderson, Jenny McCarthy, and Gwen Stefani saw overnight success, and blondes who weren’t having it, like Courtney Love (now a close friend of Anderson’s), were demonized.

This phenomenon, slithering throughout American culture for decades, was doubled-down on by pervy dinosaurs like Hugh Heffner and his ilk until their depravities — and crimes — were revealed by crack gumshoes way too recently. In reality, the creeps’ demise started a couple decades earlier, when a new wave of intellectual culture began rushing in from Seattle to the rest of the world: grunge, technology, bookstores, coffeeshops. Seemingly overnight, America’s youth, with jobs and nothing to do with the paychecks except build an identity, completely dismissed the vapidity, lewdness, excess, and superficiality — and toxic masculinity — of the 1980s so perfectly epitomized by garish hair bands like Lee’s.

The sacrificial blondes, though, they held on a little while longer.

Disgust at this phenomenon and the me-first ’80s that bolstered it is what Robert Siegel (The Wrestler) portrays brilliantly with his love letter to the good (male enlightenment), the bad (guys like Tommy Lee), and the ugly (the exploitation of women) of the ’90s that is Pam & Tommy. The last episode of the series is even called “Seattle.”

Seattle, a.k.a. the end of guys like Tommy Lee, meatheads who were dumb enough to think they were cool, and the almost end of women like Pamela Anderson, who were dumb enough to think guys like Tommy Lee weren’t complete idiots. The beauty of the show is Siegel’s attempt to massage the blatancy of this element into the psyche of the modern viewer. A golden thread of empathy and humanity courses throughout the risings and fallings of these poor schlubs, whose intentions were mostly good. Lily James (as Pam), Sebastian Stan (as Tommy), and Seth Rogen (in a type-shattering performance as the mass distributer of their property) attack their roles with the same level of love and dedication that the celebrities oozed for each other in the now infamous sex tape.

Were Anderson and Lee narcissistic? Sure. Is that the reason they taped their honeymoon? Probably. Either way, what happened to these beautiful people was wrong. It doesn’t matter how shallow, naïve, or dimwitted they were, because it was an abject invasion of privacy. Our outrage manifests itself neatly in the sweaty, jittery performances of Rogen and Nick Offerman, who play the slimiest, most hateable perverts imaginable, but the real message here is that the true victim was Anderson.

Lee, with his big penis and bright idea to film their honeymoon, is portrayed as the kind of guy who secretly hopes for this kind of notoriety. At one point, a stunned and disgusted Pam, played phenomenally by an entirely transformed Lily James, who will, in fact, win the Emmy for best actress (Pam & Tommy is nominated for 10), asks Tommy, “Don’t you feel violated?” Tommy responds, “More like pissed.” Even with his wife, he can’t let down the macho façade, or, what is probably even truer, he really didn’t feel violated, because for him, it was just more of the schlock-rock, frat-boy shit that was his brand to begin with.

The feminist agenda stands out clearly against the backdrop of the iconic cultural elements and events from the ’90s that made it such an important decade in American culture. A love letter to this decade must be steeped in the music, and the soundtrack to Pam & Tommy is killer. “Love Fool” (to show the ominous influence of this anti-feminist ballad), “Wake Up” (to illustrate Pam coming to terms with her newfound feminism), and, hilariously, “Semi-Charmed Life” (to indicate how alternative rock by a new brand of men in touch with their feelings was obliterating the popularity of hair metal) all receive solid airplay here and for good reason — they’re classics we can all relate to, for nostalgia’s sake or not.

Don’t think that this show isn’t a great time, because it is. While Lee’s reaction has been sort of “fuck, yeah!” (big surprise), Anderson did not consent, probably because she’s traumatized from being exploited and objectified her entire life just to earn a living and maybe gain some power over her real life. Still, Pam & Tommy is as heartfelt and entertaining as hearing one of your favorite Nirvana songs on the radio. Or, OK, banging your head to a breakneck Crüe track.

It’s also definitely worth nothing that in a post-#MeToo culture, we are now recycling former sacrificial blondes into feminist martyrs, fighters, and survivors as current stunning blondes in Hollywood will no longer settle for simply existing as bikini or lingerie mannequins. At least that’s a little progress. 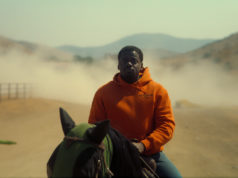