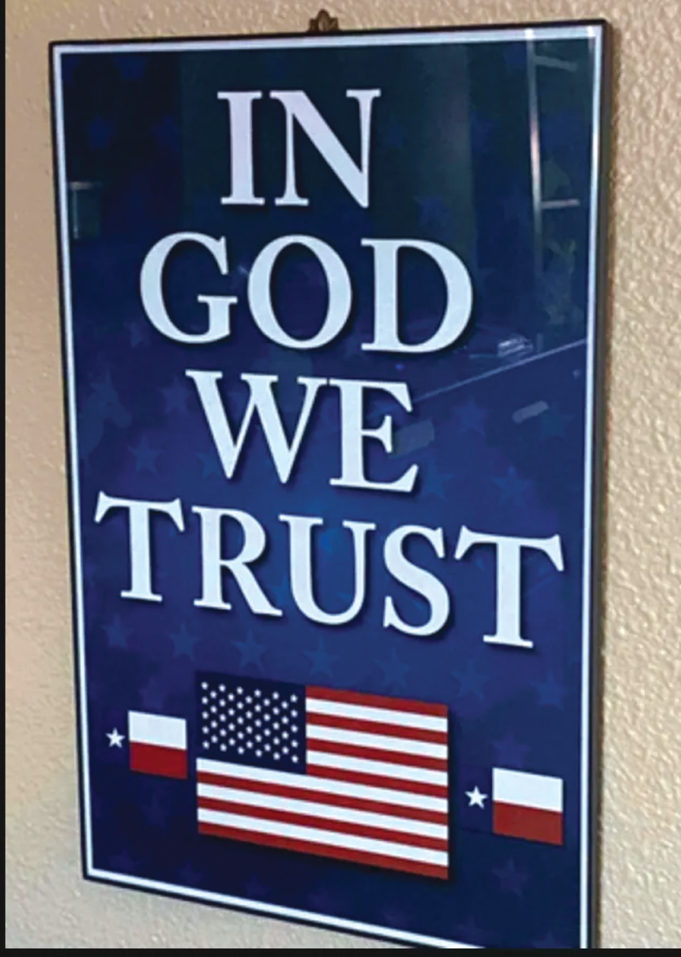 Trust in God is definitely not what we have in Texas right now.

In our sad, embarrassing state, the party of freedumb is forcing public schools to display “In God We Trucks” signs if they’ve been donated, and they’re being donated en masse by glorified snake handlers who claim they’re Christian but don’t know the first thing about Jesus’ others-first, all-are-welcome ethos. The snake handlers’ publicized goal is to spread the word of God. Or something. Their unspoken mission is to make non-Christian children feel unwelcome for not being Christian, essentially peer-pressuring them into joining a cult. Sorry, a “religion.” Which I guess that’s what it is if you’re a Jesus Christian, not a Republican Christian. They’re two wildly different things. One says love everyone no matter what, turn the other cheek, and help the downtrodden — and his words alone are worth devoting your life to — while the other is trying to grift its way into ultimate power to remain wealthy and protect Whitey.

And grifting kids makes sense. Churches, especially evangelical ones like Mercy Culture in Fort Worth and so many others it’s nauseating, have begun politicizing from the pulpit, which goes against their “tax-exempt” status. Means nothing. Absolutely zero. As Mercy has proven by inviting hard-right politicians to its stage, churches can effectively lobby for whichever candidate they want without fear of punishment or backlash. To keep campaigning for Dylan “F-150” Jones, Cole “Redneck” Daniels, or whatever other whitebread racist is running as a Republican across this poor excuse for a country, the churches — and it’s all of them except the Black ones — require a healthy influx of new members. Enter: kids peer-pressured into hating others and punishing women and other minorities to get into heaven.

The churches are smart. They know that kids, even most teenagers, don’t have any money. The grift begins with “fundraisers.” Hey, little kiddos, the church says. Why don’t you pass this tin can around your baseball team? You get to keep two whole dollars of every five you raise for us. And then the grift becomes the $16 million fleeced from true believers by “prosperity gospel” preacher Ephren Taylor at Lakewood Church in Houston. Wasn’t it Jesus who overturned the moneychangers’ tables? Guess Taylor, Mercy, and their anti-Jesus ilk forgot about that little story. #convenient

While the tin-can money, as far as we know, doesn’t go directly toward any politician’s campaign, it does end up fueling the churches, who offer their stages to particular candidates for them to build their brands, a.k.a. attract voters, and as the past 50-plus years have proven, Republicans do not give one single, solitary fuck about helping anyone but the 1%, so unless you’re in that lucky? grifted? probably inherited? stratosphere, you should know that a vote for a Republican politician is a vote against your best interests and those of most of your family, friends, and neighbors, who, oddly, are probably also Republican, because we live in this Medieval Times version of a state and pretty much everyone here is racist.

Hold on. URGENT email coming in hot. OK. Seems that Chuck, Nancy, and the rest of the circular-firing-squad gang want me to send them more money for them to cower in a corner to protect themselves from mean tweets and alienating swing voters. Roger that, guys. An appropriate $0.01 coming your way. Godspeed.

Even evangelicals have to admit this slogan nonsense is nothing but a grift. That’s it. And for them, I have only one question. If the lack of God in schools is to blame for all of our shootings, what explains the lack of school shootings in every other, non-Christian country? Japan and Denmark also don’t have any “God” in their schools, and they’ve been doing just fine. Maybe the party of “God and guns” is wrong. *clutches pearls* Could it be? Could it be that people who get their news only from one warped televised “news” source have become blind to reality? I can’t even. — Anthony Mariani

This column reflects the opinions of the editorial board and not the Fort Worth Weekly. To submit a column, please email Editor Anthony Mariani at Anthony@FWWeekly.com. He will gently edit them for factuality, clarity, and concision.