The good news: I didn’t puke. The bad: I spent about a million dollars at the bar.

And that’s a million dollars that I, the editor of a small newspaper in Smalltown, U.S.A., do not have, but who gives af. It was local music Christmas, and if I was going to carpet-bomb the shit out of my checking account, I might as well have done it to the mellifluous tuneage and among the sparkling company of people I like who live in the same unremarkable, flat town as I do. I went big, then I promptly went home. After the dancey after-party at Lola’s. Where several ill-advised dad-bod moves were conducted. To a soundtrack of “Shake Your Booty” and “Love Train.” #someshameinmygame 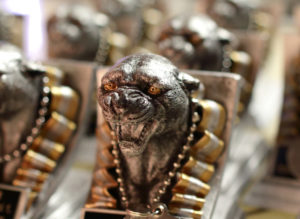 On Sunday at the wonderful, nostalgia-inducing Ridglea Theater where my checking account underwent a public Blood Eagle, we announced the winners of our 23rd? 24th? 25th? Music Awards and new Hall of Famers, and it was the perfect time for anyone but especially a married 51-year-old dad with married 51-year-old dad problems to be livin’ la vida local. Winners won, great bands performed, thanks were given, tacos were nommed, pictures were taken, Lola’s owner Brian Forella said the F-word a fuck-ton onstage, and, apparently, many drinks were drunk. And many of them by me. Why I was tipping $10 on $7 Ultra and Lone Star pounders, I have no idea. It was as if the ghost of Jay Gatsby had entered me. Wait, that didn’t come out right …

There are lots of people deserving props for making this Music Awards Ceremony happen, starting with the good folks at the Weekly who did all the dirty work in not only bringing back the awards after a pandemic-related hiatus but bringing them back seamlessly. Except for the occasional facemask and the overall smaller crowd, it was like 2017-ish all over again. All my pre-party concerns were rendered meaningless by our crack crew. Was there going to be food for the VIPs (read: me) beforehand? There was, “sent with love from Angel” at Guapo Taco (301 S Sylvania Av, 682-966-9645). Did we have awards presenters? We did. Did we have friends or family to accept awards for winners who couldn’t make it and the posthumous Hall of Famers? Yes. Did we have all the slides for the big screen? You bet your sweet cheeks we did. All that, plus all-important drink tickets. *angelic choir sings* Thanks for kicking so much ass, Michael Newquist and Jennifer Bovee, and “grazie” also to manager Bob Niehoff, account executives Julie Strehl and Tony Diaz, centerfielder Wyatt Newquist, and owner Lee Newquist, all of whom performed acts of physical labor before the doors opened — I would have but *stretches* had to keep my hammys fresh for the disco party later. Art director Ryan Burger also earns kudos for his killer Panthy artwork and writers Juan R. Govea, Patrick Higgins, and Steve Steward for their tireless local music coverage in these pages. I wrote about local music for the FWWeek every week for over 20 G.D. years — right-wing assholes and our fucked-up body politic require my services now. Lots of Hotels, John Price, Flick, Goodwin, Black Tie, Collin Herring, Meach Pango, TTXQ, and BULLS on my iTunes, though.

I’d also like to thank our MCs, Greg Spicoli from KNON’s Reckless Rock Radio and the Weekly’s Diaz. Greg, we love you, and you did great, but when you announced best keyboardist nominee Justin Pate as “Justin Pâté” … dude, I almost spit my $7 beer out. Thank you for that.

Big props also to our sponsors: Silver Star Spirits, KNON, and Printed Threads. You greased the wheel nicely, like Jay Gatsby about to enter someone unwittingly, and we appreciate ya.

We’d also like to tip the ol’ dandruff-spackled fedora to the bunch of nominees and their plus-ones who generated a massive case of kibble for Don’t Forget to Feed Me, our nonprofit sponsor that helps four-legged good boys and good girls all over town avoid hunger.

Perhaps most of all, let us now praise our splendid performers and the Ridglea’s soundfolk. From Flickerstick’s Brandin Lea and Fatima Thomas, who opened the show, to headliners Sam Anderson & The FW All-Stars, with several acts in between, the showmanship was on point and the sound amazing. While I deeply appreciated mind-tingling rapper 88 Killa, spunk-rockers Cool Jacket, and rootsy singer-songwriter Joe Savage, who performed a haunting ballad for our memoriam to all those we lost this year in the local scene, I was blown away by the Jesse Jennings Band because A.) I hate bro-country music and B.) I never go to see bro-country music and will make a U-turn if I walk into a place and hear that shit. But what a super-tight band with good, catchy melodies and dynamic instrumentation and song structures. V impressive, Jesse. Respect.

This year’s awards were much different from previous years, when we compiled the ballot from experts’ write-ins. For 2022, we let the readers decide — the nominees and the winners. Other than seeing a lot of the same names on the ballot, the process seems to have worked out just fine. And, like, do we really need an excuse to get together and run up my tab?

Below are the Hall of Famers and winners of our something-something-year annual Music Awards. Thank you all for voting. Support local music wherever you are and whenever you can. Barring civil war or another COVID catastrophe, I tentatively say, “Until next year …”

Rachel Gollay, inducted by Edward Brown, for her dedication to helping artists survive the pandemic