Home Music The Show Rascal Flatts
SHARE
Facebook
Twitter
Back in the ‘90s, the heartthrob mag Jane used to have a regular section called “Cute Band Alert,” a heads-up on the hottest guys vying for the top of the pop charts. The rootsy trio Rascal Flatts is a relic from Jane’s boy-band heaven. They emerged right around the turn of the millennium looking like they’d been cloned in a Music Row laboratory, ready for heavy rotation on CMT and even heavier brickbats hurled by surly critics who loathe surface-over-substance. 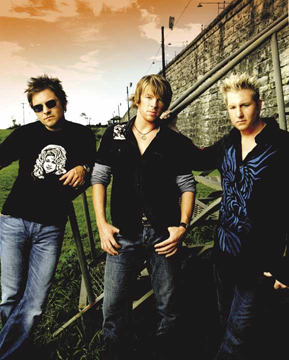 But a funny thing happened on the (inevitable) way to Billboard success: Vocalist Gary LeVox, guitarist Joe Don Rooney, and bassist Jay DeMarcus proved to be cute and talented, and more than a few critics’ heads nearly exploded trying to absorb the combination. LeVox’s voice has a quality of adolescent yearning that’s so damned sincere it’s hard to dismiss, and, among the quartet of albums the three li’l rascals have released, there are a dozen memorable tunes.

Rascal Flatts’ most recent disc, Me and My Gang, seems to be following the Dixie Chicks out of any pretense of country and straight into ’70s-style FM pop, but Flatts fans don’t seem to mind — the disc has already sold enough units to put these pretty boys in the superstar company of folks like Tim McGraw and Toby Keith. Eventually, if the Flatts-landers want to fulfill what seems to be the honest ambition of maturing into musical craftsmen, they’re going to have to break out of the super-slick production straitjacket that’s been unceremoniously placed on them by their label. But right now, don’t hate Rascal Flatts ’cause they’re cute and rich. Hard to recall now, but even Merle Haggard was once pin-up material — and you better believe his label took full advantage.