In his almost 10 years with Metropolitan Classical Ballet, co-artistic director Alexander Vetrov has staged a lot of productions, everything from Spartacus to a full-length Nutcracker to various skillfully worked excerpts from some of the ballets he danced while at the Bolshoi in Moscow. But Vetrov has never staged anything he created specifically for his Arlington-based company. 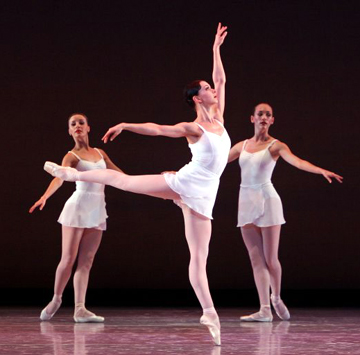 Until last week, that is, when MCB took over Bass Performance Hall to offer three works as part of the company’s season finale. For his original piece, the Russian choreographer surprised everyone by ignoring the obvious choices from his homeland. No Tchaikovsky. No Prokofiev. Rather, Vetrov turned to the ultimate classicist, Mozart, and fashioned a joyous little romp set to the A Major Symphony No. 29. Vetrov’s One Bridal Dress for Two revolved around a simple scenario in keeping with score’s comedic character.

And you think your mom’s pushy? At the center of Bridal Dress’ narrative is a widowed matron who orders a wedding gown to encourage one of her two daughters to (finally) marry. A suitor for each girl shows up, and the mother delightfully finds herself being wooed by the dressmaker. With only one dress to go around, a good-natured scramble for possession ensues.

Vetrov toughened up the lightweight storyline by staging Bolshoi-style acrobatics and injecting into the plot large doses of wit, charm, and a touching innocence that has all but disappeared from the stage. Heaven knows there’s a stack of paper-thin comedies out there aspiring to this kind of stylish exuberance, and most of them fall flat. Vetrov found the right combination, and the dancers made it work.

Svetlana Kuzyanina and Mariya Kudyakova were the sisters, and Kuzyanina in particular was delicious, all bubbles and froth. Her technique was solid and her presence intoxicating. Over the years, Kudyakova has continued developing into an admirable dancer, but (and this is a minor but not entirely irrelevant quibble) she has yet to learn the secret of keeping her toe shoes from clunking.

As one of the suitors, Andrey Prikhodko was as elegant and dashing as you could want. If he could only land his jumps without occasionally thudding, he would be right up there in the elite ranks. As the other swain, Anatoly Emelianov was an animated dynamo with power to spare.

The character role of the widow was nicely portrayed by Danielle Cohen, and, as the dressmaker, Yevgeni Anfinogenov was also effective.

Anfinogenov got to actually shine in the evening’s opening work, George Balanchine’s Concerto Barocco. His wife, Olga Pavlova, was his partner for the extraordinary adagio of the slow orchestral movement, and the two proved once again that they’re pure magic together. The stunning Pavlova is one of the wonders of the dance world, a dancer/actress of remarkable range. She’s equally at home in the role of the icy siren in Balanchine’s Prodigal Son and as the vulnerable Edith Piaf in Eddy Toussaint’s ballet of the same name. Anything her feet touch turns to gold.

Co-artistic director Paul Mejia staged the Balanchine work, set to the Bach Double Violin Concerto, and the outer movements seemed under-rehearsed. The corps, so important here, was hesitant and out of sync, and the dancers all made a terrific racket with their toe shoes. (Bass Hall is designed to project sound and is unforgiving to careless footwork.) Surprisingly, Ron Spigelman, conducting the company orchestra in the pit, found little energy or excitement in the piece. He’s usually more persuasive, as he was in the other ballets, including the one that ended the evening.

Complete with larger-than-life Bolshoi-style leaps, turns, and one-arm lifts, MCB’s Sovietized version of Walpurgis Night (choreographed by Leonid Lavrovsky from the bacchanal in Gounod’s Faust) was enjoyable and left Kultur utterly exhausted and ready for bed. Good thing I got to take with me to La-La Land this small factoid: No other Southwestern company does more justice to Russian dance than our MCB.

Yeah, yeah, yeah. Kultur’s all about the local fine arts scene, but when offered the chance to see one of the greatest musicals of all time — in person! at Bass Hall! — I’m not going to pass.

Well, I guess you could say there was a tiny, flimsy local angle to The King and I, presented by Casa Mañana’s Broadway at the Bass series. His name: Lou Diamond Phillips. The silver-screen actor who matriculated at UTA and got his professional theater start here in town at Stage West has starred in La Bamba, Stand and Deliver (for which he received a Golden Globe nomination for Best Supporting Actor), and the creepy-cool psycho-religious action drama The First Power, among a lot of other films. At Bass Hall last weekend, Phillips played the King of Siam, a role for which his performance in the 1996 Broadway revival earned him a Tony nomination for Best Actor. King Lou couldn’t belt like the rest of the cast, but every time he appeared on stage, I’ll be damned if the audience didn’t sit up and begin smiling. (Trust me. I scanned the room every time.) With his soft good looks and muscular body, Phillips appears to have been built to play the part. (Is he Yul Brynner? No. But c’mon: Nobody is.)

The set design, the extravagant costumes, the music, the choreography — everything was as close to perfect as humanly possible. A couple of things kinda bothered me, but they were more the result of both my intimate knowledge of the production and of the experience itself. I’ll be brief: I couldn’t for the life of me figure out why some audience members kept giggling during slave Tuptim’s harrowing, sumptuous, fourth-wall-breaking dramatic interpretation of Uncle Tom’s Cabin. I also didn’t like the rumble of thundering tympani beneath Tuptim and her undercover lover’s fantasia, “I Have Dreamed” — there may actually be no better way to mar one of the most celestial, lyrical love songs ever penned than by weighing it down with tribal beats.

The final scene in Casa’s version is worlds better than the one everybody knows from the movie. Let’s just say that in the new finale, Lady Thiang tenderly proves that her unconditional love for her husband is almost as big as her love for love itself. At the moment when the King is about to die, the head wife gracefully distracts herself, allowing the love that should have been, between the King and the American abroad, Anna, to be acknowledged. Just brilliant.

Up next for Broadway at the Bass is another Rodgers and Hammerstein classic, Oklahoma! Visit www.casamanana.org for more info.

Came across an interesting story in The New Yorker a couple of weeks ago, about the unique, nearly sinister marketing campaign behind Sony Pictures’ The Da Vinci Code. Seems that Sony brass are trying to avoid pissing off Catholics by coercing anti-Code Catholic scholars to talk about the movie in public forums. Right on time, TCU serves up Debunking The Da Vinci Code, a panel discussion about the cinematic version of Dan Brown’s best-seller. The talk is tomorrow (Thursday) at 7:15 p.m. at Kelly Alumni Center, 2820 Stadium Dr. Admission is $15. Call 817-257-6696.