Home Film Film Reviews Night Swims
SHARE
Facebook
Twitter
Lately, the “M” in M. Night Shyamalan has started to stand for “maddening.” Like his underappreciated previous film The Village, his current movie Lady in the Water has its share of bad moments but isn’t a bad movie so much as an ambitious failure. I can’t call it a success on any level, yet as I watched, I kept noticing clever shots and visual touches that I liked. Shyamalan’s prodigious directorial talent is still plain to see. It’s just not clear where he’s going with it. 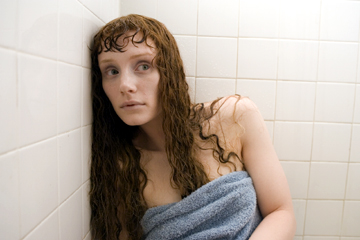 Lady in the Water begins in a cheap-but-not-seedy Philadelphia apartment complex called The Cove. Its superintendent is a man who’s named Cleveland Heep (Paul Giamatti), so you know he’s a sad guy. Mr. Heep’s unremarkable lot in life changes when he tries to catch the person who’s been swimming in the apartment’s pool late at night. One evening, he hits his head and falls into the pool, where she saves him from drowning. Her name is Story (Bryce Dallas Howard), and she has mysterious powers — when he’s in her presence, Mr. Heep loses the speech impediment that afflicts him.

Story turns out to be a “narf,” a sea nymph who has become trapped in our world and must return home before she’s killed by a wolf-like creature that’s stalking her. This is detailed in an awful, awful lot of expositional dialogue delivered by a six-foot-tall Korean party girl named Young-soon (Cindy Cheung), who translates the information from her mother. She goes into exhaustive detail about narfs: who they are, what they need to live, how they can be hurt or protected, and why they’re good for the economy, though I may have imagined that last bit. Young-soon is a funny character, and Shyamalan’s savvy enough to break her dialogue up into chunks, but nonetheless her speeches repeatedly stop the movie dead.

This is hardly the writer-director’s only bad call. He gives himself a substantial acting role, despite having zero screen presence. He includes a lengthy, sententious animated sequence at the movie’s beginning, which explains nothing and is the worst stretch of the film. The special effects are embarrassing in their conception. The Cove is never established as a scary setting. More and more of The Cove’s tenants are pulled into the quest to get Story home, and none of them voices the least bit of skepticism about a convoluted and daffy plot. Shyamalan even points out his script’s shortcomings through the character of a snippy movie critic (Bob Balaban) who lives in The Cove and injects meta-commentary on the film that we’re watching. Ostensibly discussing the romantic comedy he just saw: “The characters go around speaking their thoughts out loud. Who does that?”

This running joke, which plays better than it should, points out that for every instance where Shyamalan lapses into cheesy bad taste, he makes a good decision. His formidable sense of composition gives his movie all sorts of unorthodox angles. Aided by cinematographer Christopher Doyle, Shyamalan’s visual style alone is enough to hold your interest, even if his fondness for overhead shots is threatening to become a tic. His skill is so great, he manages (just barely) to save a climactic moment at the end from terminal dopiness by filming it from below the surface of the swimming pool. Shyamalan’s underrated sense of humor helps here, too. He finds quite a few intentional laughs among The Cove’s eccentric tenants, including a bunch of stoners who indulge in aimless conversations and a weightlifter (Freddy Rodríguez) who works out only the right side of his body.

The filmmaker also imports Bryce Dallas Howard, the best thing from The Village, into this film. With her pale skin and unconventional features, this 25-year-old actress is strongly reminiscent of Sissy Spacek during her Carrie days. She’s often tremulous and vulnerable, but she projects an underlying gravitas that makes her an unnerving presence on the screen. Here she has a scene in which Story tells an amateur political theorist (played by Shyamalan himself) what will happen to the book he’s writing. An oracular speech like this can be a pitfall for an actor, but Howard delivers it so plainly and with such authority that you never doubt the future is speaking through her. Portraying a being from another world is more difficult than you might think, and she pulls off the trick.

Her performance gives Lady in the Water a sense of the uncanny that is missing from the rest of the film. In The Sixth Sense and significant portions of Signs, Shyamalan was able to convincingly evoke the ordinary world coming into contact with something strange that changed all the rules. He approached both as horror films, and they held mystery, wonder, and terror. Those qualities are gone here, and all we’re left with is that movie critic character, deconstructing the genre conventions of slasher cinema even while he’s staring death in the face. For a filmmaker who aspires to transcendence and is gifted enough to occasionally achieve it, that’s not an improvement.