Home Film Film Reviews Olive the Family
SHARE
Facebook
Twitter
An enormous crowd-pleaser at the Sundance Film Festival, Little Miss Sunshine now looks poised to be this year’s “little indie movie that could” box-office hit. The packed house at the Angelika in Dallas, where I saw it last week, was appreciative, and I wish I could join them in singing the praises of this consistently watchable and often very funny movie. Yet nagging doubts keep holding me back. 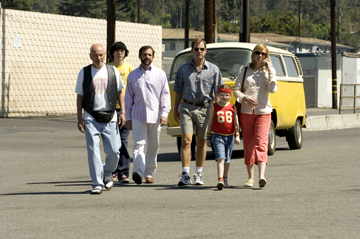 The main character is Olive Hoover (Abigail Breslin), a 7-year-old girl who entered a local girls’ beauty pageant on a whim and was named runner-up. When the winner is disqualified for using diet pills, Olive becomes eligible to compete in the national competition in Redondo Beach. Her parents Richard and Sheryl (Greg Kinnear and Toni Collette) decide to drive her there from their home in Albuquerque in an ancient, mustard-colored Volkswagen Bus that is falling apart around them. Also tagging along on the trip are three relatives who can’t safely be left alone: Olive’s Nietzsche-reading older brother Dwayne (Paul Dano), who has taken a self-imposed vow of silence until he gets accepted into the Air Force Academy; Richard’s dad Edwin (Alan Arkin), who was thrown out of his nursing home for snorting heroin and is now Olive’s coach for the beauty contest’s talent portion; and Sheryl’s brother Frank (Steve Carell), a Proust scholar recovering from a failed suicide attempt after his grad-student boyfriend ditched him for another gay Proust scholar.

Whew! All this dysfunction packed into one van! It’s a little much, especially since it’s all transparently calculated to be played for laughs. The husband-and-wife directing team of Jonathan Dayton and Valerie Faris do play it pretty well, it should be said. They have a decent sense of composition and comic timing, and the scenes don’t go on too long. Whenever the proceedings threaten to become too mushy, there’s a nicely placed wisecrack or gag to puncture the mood — when Olive voices insecurity about her looks, her grandfather reassures her, “I’m madly in love with you, and it’s not because of your brains or your personality.”

That scene between Arkin and Breslin is exceptionally played, and it’s typical of what this seamless ensemble cast has to offer. When Richard gives Olive crap about the ice cream she has ordered with her breakfast waffles, the others move in concert to undermine him. The individual performers blend in with one another well enough that they don’t stand out, though it is interesting to see the normally high-key Carell rein in his wilder instincts and play the Paul Giamatti role. He’s best in the early scenes, when Richard, a two-bit motivational speaker with dreams of being the next Dr. Phil, starts nattering on about his nine-step program for success and Frank sits there oozing contempt for his brother-in-law but lacking the energy to say anything. Carell handles this OK, but I couldn’t help wishing he had been given a few chances to cut loose like he did in Anchorman and The 40-Year-Old Virgin.

The actors help matters tremendously, but the pain their characters are supposed to be suffering never feels quite real. The realistic tone doesn’t jibe with the excess of dysfunction that’s on display here, and the movie’s comfortable rhythm and breezy patter reduce the Hoovers’ enormous psychological problems to colorful quirks. Michael Arndt’s script deploys the characters with the mechanical proficiency of a George S. Kaufman farce. Like a traveling version of one of Kaufman’s early–20th-century plays, Little Miss Sunshine comes off as brilliant and shallow.

So overplotted is this movie that it’s a relief when the filmmakers include something tossed-off like the shot of Olive rolling a tire around an automobile junkyard. Because this character isn’t saddled with an endearing defect, she comes off as much more real than the adults around her. Much of this is down to Breslin, who previously played Mel Gibson’s daughter in Signs. Her innocence and joy are at the heart of this movie and the driving force during the only part when the comedy truly takes flight. That’s at the end, when the Hoovers reach the Little Miss Sunshine competition. If you’re as creeped out by the kiddie pageant scene as I am, you’ll be gratified to know that the filmmakers and the Hoovers share our discomfort. This stretch of the film is grotesque without being sensationalistic (the swimsuit competition still gives me hives), which makes it doubly gratifying when Olive’s performance in the talent portion unwittingly makes a mockery of the whole pageant. Like Napoleon Dynamite, this indie comedy ends on a high note that will send many moviegoers out of the theater happy. If only the rest of the movie had been so inspired.