Home Calendar Big Ticket Nights of Cinema
SHARE
Facebook
Twitter
Federico Fellini began his filmmaking career as the Italian movie industry was picking itself up from the ruins of World War II, much like the rest of the nation. He started out in the same neorealist vein as his contemporaries, but even in his early films there were flashes of the surreal, fevered imagination that would inform his mature work. Eventually, his movies would coin the word “Felliniesque,” meaning a sensibility that embraced extravagance, flamboyance, and an atmosphere of carnival-like revelry. 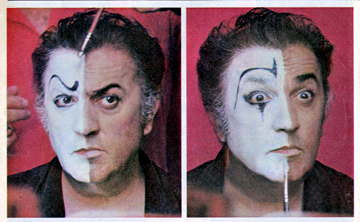 Tutto Fellini is a one-of-a-kind retrospective of Fellini’s entire body of work, running for two weeks at the Modern. This massive cinematic event, years in the making, has been brought here by Fort Worth’s Don Young, whose web site at www.felliniana.com is an exhaustive tribute to Il Maestro. The director’s flaws will be apparent: his flagrant disregard for narrative, his autobiographical self-indulgence (uncomfortably close to home in his adultery fantasy Juliet of the Spirits), his fuzzy nostalgia and optimistic maunderings about the human spirit, his frequent resort to showing grotesque-looking people. Yet Fellini’s greatness will likewise be in evidence everywhere, even in failures such as Satyricon and Amarcord, which are never dull to look at. Meanwhile, his best works — the tragically beautiful La Strada, the spectacular 8 1/2, the helplessly seductive La Dolce Vita, and Nights of Cabiria, with its perfect balance of fantasy and realism — are authentically uplifting masterpieces that deserve to be seen on the big screen, especially in the re-mastered prints that will be on display here. In addition to all the movies, the festival is larded with lectures by local film critics and professors, to add perspective on what we’re seeing. This promises to be as important as any museum exhibit, but it’ll only be here for a short time. Missing it would make you as sad as any of Fellini’s beloved clowns.