Home Film Film Reviews Summer Games
SHARE
Facebook
Twitter
In one of those weird confluences of events, Hollywood’s four new releases this week are all about men testing and challenging themselves through play, whether that’s football, music, drinking, or eating worms. Maybe the studios are releasing these movies during this last week of August because they think that we’re supposed to start focusing on weightier matters come September. (How silly of them, if that’s true!) Whatever their reasoning, I’ve got the scoop on three of those films. The fourth, the OutKast musical Idlewild, didn’t screen in time for our deadlines, and I’m pissed about that. 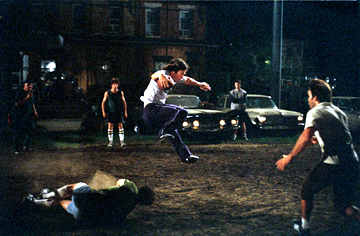 Late summer is the time for college students to head back for another semester. Before gearing up for their keg parties, they might want to check out Beerfest, by the comedy troupe known as Broken Lizard. The five-man group of Colgate University grads also did Super Troopers and Club Dread before snagging a big-ticket entry with last year’s Dukes of Hazzard movie. They dropped the ball with that, but that project wasn’t really them. This, for better or worse, is them. Not only that, it’s funnier than anything else they’ve done so far.

Maybe that’s because, the title notwithstanding, the movie is actually a delicate character study full of literate dialogue and penetrating insights into the nature of human … Oh, who am I kidding? It’s about an international beer-drinking contest, and it begins with a disclaimer in red letters: “If you attempt anything you see in this movie, YOU WILL DIE!” No joke. One of the first things the main characters do is lock themselves in a room with a full keg and vow not to leave until they’ve drunk the whole thing. Since there’s only five of them, that works out to about 25 beers per. Maybe that’s how the lizard got broken.

Paul Soter and Erik Stolhanske play two brothers from Colorado named Wolfhouse who travel to Germany for Oktoberfest. They stumble into a super-secret competition that’s like an Olympics for bar games: volume chug, monkey chug, quarters, beer pong, etc. The defending champion German team is run by a brewery owner (Jürgen Prochnow) from an aristocratic branch of the Wolfhouse family that the brothers didn’t know existed, and he uses the competition to embarrass the hell out of his Yankee relatives. Back in America, the Wolfhouses recruit their most alcohol-tolerant drinking buddies (Jay Chandrasekhar, Kevin Heffernan, and Steve Lemme) to form a U.S. team to avenge their defeat.

The Lizards have their dynamic down pretty well. The big, pudgy Heffernan and the tiny, balding Lemme are the funny guys, the white-bread Soter and Stolhanske are the setup guys, and the perpetually stoned-looking Chandrasekhar is the ringleader. Some of their gags are entirely predictable, like the one with the Wolfhouses’ grandma (Cloris Leachman) handling a sausage. Also, the troupe should have done a bit more to take beer culture down a peg instead of celebrating it.

Still, the jokes stick to the wall more often than not. There’s one of the more shameless resurrections of a dead character that you’ll ever see, and a parody of Das Boot that’s made more delicious by the presence of Prochnow, who starred in that film. Part of the Beerfest festivities include a bikini contest that crowns “Miss Barley,” “Miss Hops,” and “Miss Yeast.” (“Stay away from that one,” one of the Wolfhouses advises.) Gags like that make this incredibly irresponsible comedy good yeasty fun.

Late summer also means that grade-school kids are returning to class as well. That means dealing with bullies. Thomas Rockwell’s book How to Eat Fried Worms was written in 1973 as a story about a more-or-less friendly wager between kids. The movie version is updated to reflect more contemporary issues. New boy in town Billy Forrester (Luke Benward) finds himself being targeted by the bully Joe (Adam Hicks), who puts earthworms in his thermos. Billy responds by throwing one of the worms in Joe’s face, and the battle is on. Pushed so far that he ignores his own weak stomach, Billy bets Joe that he can eat 10 worms in one day without throwing up. Joe’s posse responds by preparing recipes for Billy that are disgusting enough to make someone hurl even without the worms. One has melted marshmallows, canned tuna, and ketchup — yecch!

Writer-director Bob Dolman previously did the dire comedy about former rock groupies The Banger Sisters. He’s much more in his element here. Instead of drawing these kids as bland character types, he gives them interesting and not always flattering wrinkles, like Billy’s outgoing 4-year-old brother (Ty Panitz) suddenly letting out an unprovoked burst of hate at his absent sibling. The movie may be dependent on gross-out jokes for its humor, but there’s a good deal more intelligence behind this than there is behind a family film like Zoom, which tries to use special effects to compensate for a lack of everything else. (Come to think of it, that’s what lots of movies for grown-up audiences do.)

Unfortunately, this movie’s strengths are, if not overwhelmed then certainly canceled out, by its weaknesses. Benward is pretty sketchy in the lead role. The story is padded with useless twists like the one where Billy turns on the girl (Hallie Kate Eisenberg) who’s been trying to help him win his bet. The subplot for Billy’s reasonably cool parents (Tom Cavanagh and Kimberly Williams-Paisley) doesn’t lead anywhere, either, except to a funny slapstick scene when they try to play tennis. The film doesn’t drag, but it doesn’t cry out to be seen, either. In the end, the biggest accomplishment of How to Eat Fried Worms is ensuring that you’ll never look at chow mein noodles the same way again.

Finally, late summer means another NFL season is about to start, and rather than pore over fantasy stats or scan the internet for crumbs of news coming out of training camp, football fans should take a break and see Invincible to get in the right frame of mind.

The movie’s set in 1976, when the Philadelphia Eagles were so terrible that newly hired coach Dick Vermeil decided to whip up excitement among the team’s disenchanted fans by holding tryouts open to the public. Of the many Philadelphians who showed up to work out, only one snagged an invitation to training camp: Vince Papale, a 30-year-old bartender whose experience was limited to a single year of high-school ball and a great many sandlot games with his pals. He wound up making the squad as a special-teams player and got to live the fan’s dream of playing for his beloved team for three seasons.

The opening credits are a montage of street scenes from Philly’s blue-collar neighborhoods, set to Jim Croce’s “I Got a Name,” and it really seems like there’s no other way this film could have begun. Ericson Core is a first-time director with plenty of experience behind the camera as a cinematographer (The Fast and the Furious, Daredevil), and he nails the atmosphere of a city in decline but clinging to its pride. Philadelphia looks convincingly ramshackle, especially that dive bar where Vincent works. When the action moves to the football fields, though, Core films it with the right degree of slickness. There’s a great shot of Vince during his first NFL kickoff, as he runs down the field full tilt, draws a bead on the return man, and then gets splattered to the turf by a crackback block before he can make the tackle.

The script cuts smartly and occasionally cuts to the quick, such as when Vince’s drinking buddy (Michael Kelly) shows up on his doorstep to wish him luck but is clearly thinking about the brother he lost. “I never wished Andrew good luck before he went to ‘Nam,” he says before setting off for home. The supporting roles let the low-key but talented actors have similar moments in the spotlight — Kevin Conway as Vince’s hard-bitten dad, Michael Rispoli as the owner of the bar where Vince works, and Elizabeth Banks, looking attainably hot pulling draft beer for the boys behind the bar. Greg Kinnear has Vermeil’s nasal delivery down, but be sure to see this movie before you see Little Miss Sunshine, or you won’t be able to take his speeches about winners and losers seriously. Mark Wahlberg plays Papale, and though he cruises through much of the film, he turns it on when he needs to, especially when showing the character’s competitive streak underneath his reticence.

A movie like this needs a “holy crap, I’ve hit the big time!” moment, and this one’s comes during the Eagles’ season opener, when Vince and his teammates take the field at a packed Texas Stadium to a cascade of boos. Those turn to cheers when Vince sees a familiar figure in a suit and a fedora strolling to the other sideline. Even the most Eagle-hating Cowboys fan will find that hard to resist.