Home Film Film Reviews Kryptonite
SHARE
Facebook
Twitter
I’m not sure why this film is called Hollywoodland. The name refers to what Hollywood was originally known as, but it really doesn’t have anything to do with the movie. None of the characters even mentions the earlier name. The title seems to typify this unfocused though occasionally potent film that strains for significance as it tells one of many stories of the cruelty of the entertainment industry. 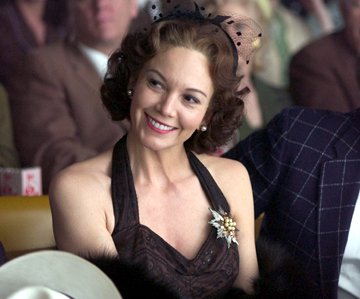 The movie is built on the real-life story of George Reeves, the good-looking but modestly talented actor whose youth was spent as a studio contract player, earning middling roles in movies large and small. He achieved his greatest fame in the 1950s playing Superman on television, a new medium that had just begun to create stars. When the show was canceled, Reeves found himself a 45-year-old actor with few prospects, and in 1959 he committed suicide by shooting himself (and not, as the urban legend goes, by jumping out a window under the delusional belief that he could fly).

The film shifts back and forth in time. One storyline stars Ben Affleck as Reeves, whose career takes off after he embarks on an affair with Toni Mannix (Diane Lane), an older woman who has one of those unspoken agreements with her husband, MGM p.r. director Eddie Mannix (Bob Hoskins). Reeves’ stardom is something that most actors can only dream of. He has a huge house, his own income in addition to a sugar mama who buys him expensive things, and the starry-eyed admiration of little kids in the street. It should be enough, but he’s continually reminded that his fame is second-class and limited. He snags a part in From Here to Eternity, but at a test screening the audience hoots at his appearance in the film, unable to see him as anything except Superman. His big break evaporates, as he’s cut out of a movie that goes on to win multiple Oscars.

The other storyline takes place after Reeves’ death and revolves around Louis Simo (Adrien Brody), a fictitious private eye who’s hanging out his own shingle after being fired from a big-time firm. Louis is hired by the actor’s grieving mother (Lois Smith), who insists that her boy couldn’t have killed himself. This would be useful as a framing device for Reeves’ story, but it metastasizes until it takes up half the film, and it isn’t nearly as compelling. We never understand why the case becomes such a crusade for the private eye, even though we’re shown Simo’s little boy (Zach Mills) being upset by Superman’s suicide. This isn’t enough to hang this storyline on, and it leads to some tiresome scenes between Simo and his ex-wife (Molly Parker). There’s some business here with Simo being threatened by Hollywood executives, who are protected by his former colleagues, for pursuing the case. Yet the movie never conjures up an atmosphere of real menace, which is a major reason why Hollywoodland feels so gray and affectless.

The Reeves half of the story gives the film what power it has. The relationship between Toni and Eddie feels very real — a powerful old man and a trophy wife who’s much younger than he is but no longer young, a fact that she’s painfully aware of. (“I have seven good years left before my ass drops like a duffel bag.”) The only way she can feel better about herself is by taking on a series of young bucks, and all her adoring husband can do is look the other way to his own mistresses. This miserable state of affairs is evoked perfectly, and it leads to a moving scene when Eddie catches his wife without her makeup, caresses the wreck of her face, and tells her, “You’ll always be beautiful to me.”

Meanwhile, Affleck is smartly taking steps to rehabilitate his image and make himself into a Serious Thespian. At age 34, he’s playing Reeves at least five years too soon; even when the character is at his lowest point, the actor still looks good, with touches of gray in his hair and circles applied under his eyes. (Lane, on the other hand, succeeds in looking very bad here indeed when the occasion calls for it, no easy feat.) His performance doesn’t set the screen on fire, but Affleck still manages to pull this movie away from the more talented Brody by conveying Reeves’ self-loathing and frustration born of thwarted ambition. The best scene in the movie is his last one, when Reeves comes down from his bedroom and discovers his new wife entertaining two of her friends in a late-night party. He gets in on the act, playing the guitar and singing Spanish songs in a wobbly voice for the company. This is the last audience that Reeves will ever play to, and his face betrays him as he realizes that he’s boring them. With that, the actor says goodnight and goes upstairs to make his final exit.