Home News Metro Collaring Dollars
SHARE
Facebook
Twitter
Fort Worth taxpayers have been digging deep in their pockets for 11 years to pay for crime control above and beyond what’s financed by the city’s general fund. Nobody forced the Crime Control and Prevention District down the public’s throat — voters approved raising the sales tax by half a penny in 1995 to pay for it and re-authorized it in 2000 and 2005. More than $300 million has been generated during that time, and police say the money has proved crucial in curbing crime and creating a better city. 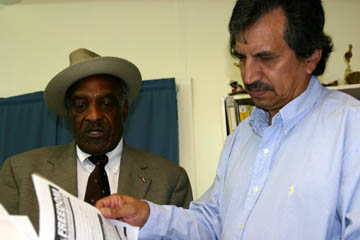 Even critics don’t suggest getting rid of the crime district, but 300 million smackaroos is enough to make people wonder if everything is being handled on the up-and-up. Residents who raised questions two years ago are again curious about the board’s spending policies. And they say a board that was designed to be independent has instead been mostly subservient to the police department. They’re planning to attend the 6 p.m. Sept. 14 crime district board meeting at pre-council meeting chambers at city hall to ask for more accountability.

“The police department is running the meetings,” said Louis McBee of Fort Worth Citizens for Responsible Government. “That was one of our main objections. The board is not controlling the crime control district, the police are. We were promised after all those public hearings from two years ago that the board was going to get more involved and the police were going to be less involved. Nothing has changed.”

The residents’ concerns were partially stoked by new board member Ernest Mackey, who attended his first meeting recently and didn’t like what he saw as the police department’s controlling hand. Police Chief Ralph Mendoza’s secretary currently serves as the board’s secretary. City staffers maintain board records and put together budgets. And rules for parliamentary procedure were ignored, Mackey said.

“The police department talk or butt in whenever they want to, whether they are asked or not,” he said. “The police have set themselves up as the staff for the board, and that is a conflict of interest.”

Board chairwoman Becky Britton said Mackey attended one meeting, arrived unprepared, and made assumptions unsupported by fact. City staff may prepare the budgets, but the board can approve or not. The board has withheld its approval on budgets in the past and sent them back for tweaking by city staff, including recently when police wanted the crime district to pay worker’s compensation costs for officers whose salaries are paid for by the district. The board refused.

“We’re not a rubberstamp [board], and if you attended any meetings you’d know it,” she said. “He’s only been to one meeting, and he didn’t even show up on time. We had to stop the meeting to swear him in.”

The half-cent sales tax was designed to create a pool of money for crime control programs above and beyond what the city budgets each year for police. An independent board, with one person appointed by each city council member, determines how the money is spent. And while everyone expects the police department to make suggestions about what to use the money for, some are shocked at the level of authority police exercise over the board.

Currently, the budget pays for about 200 police officers’ salaries, or about 17 percent of the force.

“It was never intended for that,” said former city councilman Clyde Picht, who originally appointed Britton to the board. (Picht’s replacement, Jungus Jordan, kept Britton as his appointee.) “Over the years we have had code compliance, secretaries, police cadets, and numerous departments [workers] get their pay from the crime district. Obviously it was just a sham.”

Or, as Mackey puts it, the money is a “slush fund” for police.

Critics complain that hundreds of thousands of dollars are taken from the fund each year to pay overtime costs for police officers directing traffic during Bass Hall events and at Texas Motor Speedway during race weekends, which they see as wrong because it’s not crime-fighting and because organizers of other events have to pay officers for such duties.

A couple of crime district board members said the group’s criticisms come a little late.

Joseph DeLeon became a board member in 2004 and was zealous about forcing the board to become more independent. He began calling for a complete external audit of the district’s books, something that state law says is supposed to occur every year, but in fact has never been done. In the past, the crime district has relied on spot audits that were done as part of an overall outside audit of city finances, which the city attorneys said met the letter of the law. Britton said this was done so that crime district money wasn’t spent on audits. Still, this skirting of the law fostered rumors and suspicions. DeLeon has heard numerous rumors about money being diverted to other departments or being funneled to Trinity River studies. He’s been angered by some expenditures, such as money being spent for ice machines to provide police officers with ice for their drinks.

Early on, he viewed most board members as complacent. He and Britton both pushed for changes, with some success. After more than a year of making motions at board meetings to pay for a complete audit, they got their wish this summer. The majority of board members approved spending almost $30,000 for that purpose.

“I spoke up and said we owe this to the taxpayers to get all these rumors to die down,” DeLeon said. “If there is something going on, let’s get it out in the open.” Audit results are expected by October. The fact that members finally agreed to an external audit shows the board’s autonomy, he said.

“It’s going in the right direction,” he said, specifically lauding chairwoman Britton’s independent streak. “I’m elated that we were finally able to get enough votes to call for an outside audit. That is going to tell the story about what has happened with the money.”

Regarding Mackey’s concerns, DeLeon praised the newest board member’s willingness to speak out. He sees Mackey as another free-thinker on a board that is becoming more comfortable with its authority. “It’s good that he is enthused about his new position and is going to take it seriously, like I did and like Becky Britton has done,” he said.

Indeed, Britton voted against the crime district when it was first proposed, and she was considered a skeptic after Picht appointed her to the board. Several years later, she considers the crime district vital to curbing crime and maintaining Fort Worth as one of the nation’s most livable large cities. And while early incarnations of the board might have had some problems with flexing their authority, the current members are an independent lot, she said.

Critics such as Picht might think the crime district is erring by spending money on police salaries and other items and programs that he believes are outside the original intent for the money, Britton said, but nine board members can mean nine different opinions on how money should be spent.

“There is more accountability now,” she said. “I feel confident we are on the right track, and I would favor reinstating [the crime district] if I were voting on it today.”