Home Music Music Feature Right on Time
SHARE
Facebook
Twitter
Nestled between the College of Emotional Engineering and the Bureau of Synthetic Voice and Music, The Hourly Radio broadcasts propaganda across Aldous Huxley’s Brave New World. More than 70 years after the novel’s publication, a North Texas quartet of the same name is doing something similar. Yet instead of spin, The Hourly Radio produces propulsive, futuristic indie-pop. The band’s reach isn’t as comprehensive as that of Huxley’s creation, but by nurturing an international fan base via the internet, The Hourly Radio is slowly growing beyond mere geographic borders. 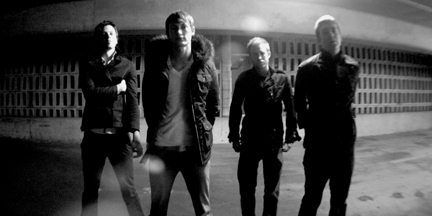 “Before the internet, I never would have dreamed of being in a band,” said singer/guitarist Aaron Closson. “It was just so hard to get your music out there.”

The band’s first recording, the e.p. Lure of the Underground (2005), would not have been as successful as it was if not for the ’net. Blogs helped spread the word, creating the kind of underground chatter that major-label groups like to take advantage of (for that we-haven’t-sold-out! touch). Case in point: stellastarr*. When Closson and company noticed the British band was coming through North Texas recently, they asked to open for them. The guys in stellastarr* said yes and were so impressed they brought The Hourly Radio along to open a slew of dates in the United States and United Kingdom.

The Hourly Radio is hoping the trend continues with History Will Never Hold Me, the band’s recently released debut album. Now that Closson and company have finished a short residency at New York City’s famed Bowery Ballroom, they plan to rehearse and save money to go back on the road. Why? Simply put, they’re better known out of town than here.

Though he doesn’t have anything against Metroplex crowds, guitarist Ryan Short believes audiences in progressive cities, such as the Big Apple and London, are simply more into new sounds. “The crowds are receptive to bands they haven’t heard,” he said. “They want to be the first to find out about new music.”

Crowds here, he said, have a strong social component, which is good if you’re a scenester. Not so much if you’re like the guys in The Hourly Radio, who would rather stay home. “When you go to shows, you see the same people,” Short said. “People go to bars because they’re friends with bands that play in bars.”

Instead of being men about town, Closson, Short, drummer Adam Vanderkolk, and bassist Tim Jansen practice, practice, practice. After all, there are always new territories to check out. Last summer, the band rented a van and toured the West Coast. “Touring is important,” Closson said. “It sets you apart from being just a local band.”

And not just playing shitty bars for pocket change while hipsters get loaded and hook up. “When we play live, we call your attention,” Short said. “You’ll like it and focus or not and leave, but you can’t ignore it.” Short prides himself on his band’s ability to “ruin the mood at a bar” if aggressive original rock isn’t on the evening’s agenda.

Once the record was finished, the band almost immediately began shopping for a label. They tried the majors but didn’t get far, eventually settling here, with Dallas-based Kirtland Records (The Burden Brothers, The Vanished, Space Cadet). As a result, The Hourly Radio gets the best of both worlds: money and resources to help with recording, marketing, and touring, plus total control of creative output. Distributed by a subsidiary of major label Sony, History Will Never Hold Me will launch yet another tour.

Several months ago, the band members quit their day jobs to focus entirely on The Hourly Radio, Short said. “Bands make it when they keep pushing, keep covering every angle.”

Including, evidently, the ones in our backyard.