Home Music Listen Up Nudity / Priestess
SHARE
Facebook
Twitter
There are basically two kinds of retro bands — ones that hew closely to the old school, and ones that occasionally flip the script. 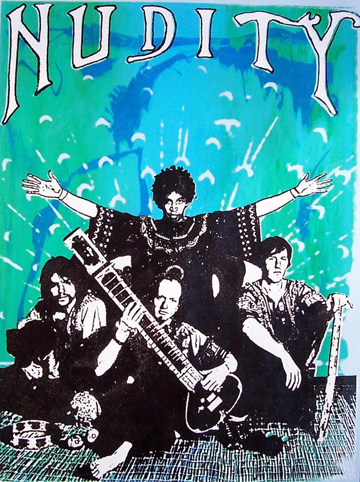 Nudity fits the latter description. The two-year-old band’s inspirations include Amon Duul II, the Velvet Underground, and the MC5. The Olympia, Wash., quintet’s eponymous debut honestly sounds as if it were recorded on cheap equipment 30 years ago. The distant, skipping drums sometimes echo like garbage lids being cudgeled at the Grand Canyon, the molten bass lines bubble and flow, and the songwriting is nucking futs. A five-minute crescendo swells in what you later realize is the middle of a single song, the stringy and fuzzy guitars bend and soar, and even though the record lists only four tracks, it’s almost 35 minutes long.

Then there’s Priestess, four guys from Montreal who sit alongside The Sword, Wolfmother, and Early Man in the neo-Sabbath bandwagon-slash-muscle van. Like fellow Canucks Rush, Triumph, and every hockey player born in the Great White North, Priestess enjoys its comfortable spot behind the curve. (We don’t know whether or not the band members have mullets.)

Hello, Master, Priestess’ major label debut, gives the strong impression that the guys are aping glammy, dorky, Dungeons-and-Dragons metal not because the style is au courant and they do it well but because, well, they’re Canadian. They probably actually think the year is 1976. Rocking tribal drums in varying tempos and spreading muddy, sludgy riffage all around, the music doesn’t reinvent the wheel, but it sure is driving.