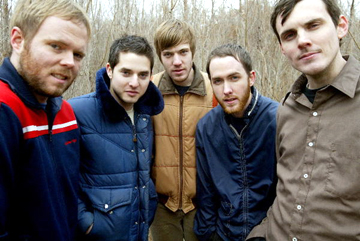 As card-carrying nonconformists, Mo, Centro, and The Spree all exude an air of calculated insouciance. Most of their songs pivot on timeless, inherently sexy popular-music tropes: love, death, soloing, “you,” “me,” cued dissonance, clinical depression. No matter how patently serious or self-consciously jocular the bands’ tuneage may seem, it can’t help but seduce our modern ears.

Midlake’s music, however, is of the past, specifically the late 1800s. Not the instruments, which were probably made within the past 20 years and, in the quintet’s hands, lead to seemingly endless moments of rhapsodic, solemn contemporary chamber pop. No, what’s olden is the vibe, and it stiff-arms the vogue for sarcasm, in a good way and evidently to the pleasure of many. Since forming several years ago, Midlake has toured the world, been lauded in national music magazines, remained partners with a large indie label (Bella Union), and has actually sold a few dozen records.

The Trials of Van Occupanther, Midlake’s recently released follow-up to 2004’s strained, Beck-ish debut, Bamnan and Slivercork, is a concept album about a sad fellow, the title character, whose existential dread complicates his otherwise simple life on the frontier. Or something. Singer and primary songwriter Tim Smith channels the fictional Mr. Occupanther and also occasionally pauses to contemplate their parallel lives. Compared to the band’s new record, a social studies textbook is downright pornographic.

Almost as amusing, the instrumentation gleefully harks to a rather unlikely source, honey-brown ’70s FM radio. To dominate the wavelengths, bands like Supertramp, Fleetwood Mac, and the Alan Parsons Project expertly followed an easy, powerful recipe of their own creation: Take different sized chunks of ebony and ivory, electric guitars with no sustain, and drum beats as soft as ticking clocks in the distance; lace everything with gorgeous, unassuming hooks; orchestrate to an immaculate sheen.

Almost every indie rock band samples bits and pieces from pre-existing genres, but few groups have dared to appropriate the handiwork of Supertramp et al. It’s just too white, and to indie rock’s core fan base of largely ideologically liberal citizens, the style’s subtext doesn’t jive with lefty, multi-culti politics.

Yet Midlake’s clean, vanilla retro approach, while risky, is needed in a way that many of us may not realize. In a music scene where sloppiness is normally equated with excellence, the band’s skillfulness is refreshing.

Midlake’s biggest affront to irony is the single, “Roscoe.” As a loud piano twinkles sadly, a tiny trap-kit and a rumbling, gasping electric guitar race each other. They go separate ways during the chorus, when Smith begins ooh—ing and ahh—ing. But not sexily like Diana Ross or Beyoncé. Smith, whose high, stoic voice is as pretty as a clarinet, merely complements the contrapuntal progressions. What jumps out aren’t his words but how he phrases them, one long note followed by three short ones: “Thought / We were due / For / A change or / Two / Around this place.”

Irony is given another blow to the chin by “Van Occupanther.” In a sluggish tempo that appears in constant jeopardy of collapsing to a halt, Smith and a flute patiently trade lines. He sings a lyric (“These buckets are heavy / I’ve filled them with water”), and the billowy woodwind expresses its sympathy. Once the panoramic chorus arrives, the two instruments come together and waltz.

The least prototypically indie rock number, “We Gathered In Spring” flows from two or three relaxed, jangly, acoustic chords. Around them, Smith’s voice flutters freely, and the wah-wah of a Moog synthesizer gently flickers. (The solo at the end of Don Henley’s 1984 hit “Sunset Grill” popularized the tone.)

Buoyed by the music’s warm, joyous timbre, some of the stories scan like pre-WWI American poems. At one point during “Roscoe,” the protagonist (presumably Smith) wonders if his life would have been different had his name “changed into something more productive” like Roscoe (“born in 1891”). Intoned delicately and clearly, the sentiment has Walt Whitman’s sense of wonder and pathos. Van Occupanther, you see, is as real as the polycarbonate disc itself. Like the narrator in Whitman’s “The Song of Myself,” Van Occupanther is each of us.

Van Occupanther also dips into folksong. In the late 1800s, you seemingly couldn’t walk a country mile without overhearing a ballad to a dead newlywed. “Young Bride” is Midlake’s mid-tempo contribution to the form. Over a delicate, skipping, tribal beat, a melancholy violin yawns for a few bars, disappears, and is replaced by our hero, alone and in distress: “My young bride / Why are your shoulders / Like that? / Of a tired old woman? / Like a tired old woman? / My young bride / Why are your fingers / Like that? / Of the hedge in winter? / Of the hedge in winter?”

The music opens up into an epic chorus that sways back and forth like a round: “Polonaise in winter / Snowshoes and hunters / Carry the goods in for you / Darkness and forest / Grant you the longest / Face made for porridge and stew.”

The song rocks, even if lyrics like “polonaise,” “snowshoes,” and “porridge” don’t. The same could be said of the entire disc.