Home Film Film Reviews Stark Failure
SHARE
Facebook
Twitter
Between the dimming of the lights and the opening credits, something happened when I saw the new film version of All the King’s Men. While the screen was showing the studio logos, the movie’s music started up on the soundtrack. The music was heavy, somber, ponderous, and obvious — a symphonic march worthy of a head of state’s funeral. (Only later did I find out it was by James Horner. I wasn’t surprised.) A thought flashed through my mind: “Uh-oh, what if the entire movie’s like this?” Over the next two hours, my fear came horribly true. 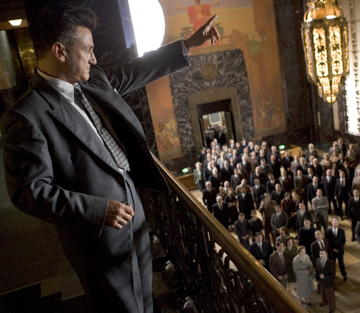 It didn’t have to be this way. Robert Penn Warren’s novel was published in 1947 and won several awards, including the Pulitzer Prize. Chronicling the rise and fall of a Louisiana governor named Willie Stark (a thinly veiled portrait of Huey Long), the book rises head and shoulders above other political novels because of the depth of its characters and the astuteness with which it addresses the larger themes of the corrupting nature of power and the boundaries between private and public life. Two years after the novel came out, Robert Rossen made it into a Hollywood movie that won several Oscars, including Best Picture. That film holds up quite well if you see it today; occasionally stilted, it’s still a piece of storytelling whose leanness never cuts into the characters’ depth or the epic scope.

The new version isn’t lean, deep, or epic, though it wants to be. Sean Penn plays Willie, and Jude Law plays Jack Burden, a journalist who bears witness to the governor’s downfall. The remake totally trumps the original for star power — Rossen could only have wished for actors the caliber of Kate Winslet, Mark Ruffalo, James Gandolfini, and Anthony Hopkins to fill out the supporting roles. Yet no one in this cast is memorable, not like Mercedes McCambridge and especially the volcanic Broderick Crawford were back in 1949.

Penn gesticulates wildly during his stump speeches, but he never generates the unforced presence of the large-and-in-charge Crawford. Penn does well in the early scenes, when Stark burns with reformist zeal, and the movie catches fire just for a few minutes when the character rescues his faltering gubernatorial campaign by going off the script and speaking to the crowds as a fellow “hick.” Even so, Willie’s descent from crusading man of the people to demagogue who’s lining his own pockets happens all of a sudden. While Penn perhaps isn’t given the chance to show the transition, he’s never convincing as a man of grand ambitions and huge appetites that swallow him up. As a result, Willie’s downfall carries no tragic weight. Great actor that he is, Penn gives uninspired, flat performances more often than many people realize, and this is one of them.

Meanwhile, Law captures Jack’s slumming rich-boy vibe but reacts so little to Willie’s presence that he seems to be in a different movie. He certainly never appears to be in thrall to the governor’s charisma. To be fair, the script’s indistinct characterization victimizes the entire cast, and the female characters are particularly shorted here. That’s too bad, seeing that Winslet and Patricia Clarkson (as a Stark aide pathetically carrying a torch for her boss) are the only actors sporting genuine accents, which is no surprise if you know that Clarkson is actually from Louisiana.

Chiefly responsible for this debacle is writer-director Steven Zaillian, who boasts a shining record as a screenwriter (Schindler’s List). However, his efforts behind the camera, such as A Civil Action, show him to be a director without any flair for visual storytelling. Here, the framing device of Willie’s last speech sheds no light on the narrative. Pivotal events like a schoolhouse tragedy are kept offscreen for no discernible reason, and the plot’s major revelations either come out of the blue or are foreshadowed in such a ham-fisted way that they aren’t shocking. It’s perversely fascinating to watch the director botch even the simplest things. Jack’s childhood sweetheart (Winslet) and best friend (Ruffalo) are glimpsed in an unexplained flashback early on, and moviegoers unfamiliar with the novel are left to wonder who the couple is until the next time the two show up, an hour into the film. And why bother to introduce Willie’s college football-star son (Travis Champagne) if you’re going to excise the subplot involving him? Why not simply cut him out of the film entirely?

Only 10 minutes longer than its predecessor at two hours precisely, All the King’s Men nevertheless drags much more because the director doesn’t know when to cut his writer’s scenes short and move on. Zaillian never gives us anything beautiful to look at, either, and, of course, Horner’s infernal music weighs down the proceedings too. This story is so good that it could be remade again in a few decades without losing freshness, which is a consoling thought. I needed consolation after seeing a film with so much talent fail so completely and uninterestingly. I couldn’t help but think as the lights went up, “We waited 57 years for this?”