Home Eats Eats Casual, Classic
SHARE
Facebook
Twitter
The newly opened Valentina’s Grill is the rebirth of Joe’s Italian Restaurant with the same owner, Laurie Cinecio, and chef, Gjergj Delia, serving up, for the most part, the same good if unspectacular family fare. There have been some changes, though, including the addition of a number of Greek dishes and breakfast specials. 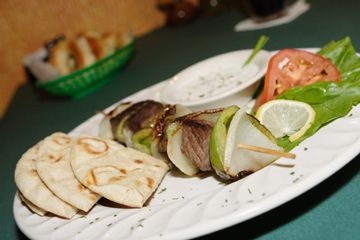 The space remains spotless, simply decorated, and cozy, with comfy booths lining one wall, and a mix of tables and booths in the center. Chest-high dividers break up the room at certain points. A dark green rug and a lot of plants add some warmth, and the barely audible opera that plays in the background lends a European touch.

On a recent visit, a few of the new Greek dishes were sampled, along with a couple of the Italian holdovers. All were good, and while two were excellent, a couple of others were slightly off.

On the excellent side were the potato soup (rich, flavorful, not starchy, seasoned with bits of carrot, celery, and onion) and the tzadziki, a yogurt-cucumber dipping sauce served as an appetizer with pita bread. What made this standard Greek dish stand out was the garlic seasoning, which amped up the overall zesty flavor.

In the “good” category was the Pasta Trio, a sampler that included small portions of lasagna, cannelloni, and manicotti. The tomato sauce was light, allowing the seasoned ricotta and plentiful mozzarella to take center stage. All of the pasta was perfectly cooked, al dente.

The Trio, like the other entrées, came with a small Greek salad (tomatoes, hot peppers, onions, and green bell peppers on a bed of romaine and iceberg) that was drenched in spicy red vinaigrette seasoned with oregano.

Two other good offerings were the patty melt — a burger slathered with diced grilled onions, topped with a generous portion of swiss, and served on sharp rye — and the gyro sandwich. Dressed in tzadziki, served on soft, fresh pita bread, and mixed with onions, tomato, and garlic, the nicely seasoned strips of ground lamb exploded with flavor. The meat was tender and juicy and nearly melted in the mouth.

A dinner-sized portion of spinach pie was less exciting than the other dishes. There was plenty of well-seasoned greenery, finely diced onion, and a hint of fennel in the ricotta mix, and it was all wrapped in perfectly cooked phyllo dough, but the dish was short on feta. For folks who think the cheese typically overpowers other ingredients, the pie may have been top-notch. But for those of us who order spanikopita purely for the feta kick, Valentina’s spinach pie was plain-Jane.

The one indisputable disappointment was the shish kabob, a single, small skewer of beef cubes, with onion and green pepper, and served on flavorless rice. Even if the meat had been marinated to perfection (it wasn’t), the offering still would have been too small. What saved it from going uneaten were copious amounts of, yep, the wondrous tzadziki.

All was forgiven, however, when the decadent baklava arrived: ground walnuts drenched in sugar and honey and baked in phyllo.

Valentina’s isn’t serving up fancy-schmancy food, but judging from the steady stream of families, workers on break, and couples out for a bite who came and went during the recent visit — all smiling — the place might not need to.