Home News Metro Cracking the Code
SHARE
Facebook
Twitter
You almost have to feel sorry for Fort Worth public school administrators. When they instituted a stricter dress code for high schools this year, their aims were laudable: Get rid of the saggy-bottom, droopy-drawer guy-wear, and the midriff-baring, mini-skirt-wearing look for girls. Ban t-shirts with degrading, vulgar, or gang-related words or art, and “tall t’s,” the huge t-shirts that gang members seem to favor. 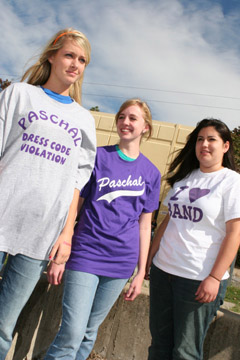 However, they forgot a basic statute in the Book of Teenagers: the Law of Unintended (and Opposite) Consequences.

Take the t-shirt rule. Rather than having to make endless judgment calls on what was or wasn’t obscene, etc., some school principals decided simply to ban all t-shirts except those with insignia for some school organization.

Result: a cottage industry in t-shirts for school groups — and even the creation of some new clubs, founded by folks who just wanted to wear the shirt. At Paschal High School, the student council got rid of its entire stock of previously unsellable shirts —labeling them “vintage Paschal clothing” did the trick. Student body president Kari Olson said that the student council not only wiped out the $500 debt with which it began the year, but is now making about $1,500 every time another school dance — with another t-shirt—rolls around, plus selling shirts to council members. The PTA, too has benefited via increased t-shirt sales. “We knew we were going to have a captive audience” for the shirts, one PTA leader said.

At Arlington Heights, anti-war kids formed the Peace Club so they could wear t-shirts displaying the peace sign. The Ultimate Frisbee club has lots of new members, because their shirts, of course, bear an image of a frisbee. The DECA business organization is also new, “but I think a lot of kids joined up because the t-shirts are really sharp,” said Arlington Heights Principal Neta Alexander.

Then there were the t-shirts against t-shirts. At Paschal and some other schools, students who showed up wearing banned items were given baggy t-shirts to put on over the offending clothes. The punishment t’s bore the legend “dress code violation” in puffy purple letters. But — you guessed it — the DCV shirts became a badge of honor for some repeat violators who ended up bonding together, like a gang, said Paschal assistant principal Renee Karriem. “We stopped giving out the dress code violator t-shirt,” she said. Instead, the school now sends most code violators home to change.

Before the policy changed, Paschal junior Kristen Kilpatrick got shirted, so to speak, for wearing a t-shirt not permitted under the code. She was sent to the office, given one of the oversized violator shirts, wore it home, and forgot about it until the school held back her report card. School administrators wanted that school property back, so she dug it out of the dirty laundry, washed it, and brought it back as ransom for her report card.

The t-shirt rule is just part of the new code, which also outlaws items like shirts that are too long (they can’t extend past a student’s fingertips) and flip-flops. And the new high school code is only part of the picture in Fort Worth schools. This year for the first time, elementary and middle school students were required to meet “standardized dress” requirements (i.e., loosely defined uniforms, such as white shirts and blue pants or skirts).

Jokes and peace t’s aside, district administrators and principals generally think the dress code has been a success. “What the principals are finding is that these t-shirts associated with the school have created and contributed to a great school spirit,” said district spokeswoman Barbara Griffith. The new t-shirt fad “hasn’t been a problem,” she said. The groups selling the shirts “have to be legitimate clubs. [The shirts] have to be neat and look good and be tucked in.”

In the first few weeks of school, many students fought the changes, and faculty and staff had to spend more time enforcing the new guidelines — a duty that many teachers thought wasn’t really part of their job description. “It really takes up a lot of my time,” said Paschal journalism adviser Crissa Renteria.

“As long as it is not disruptive, I don’t care what they are wearing,” said Paschal science teacher Charlotte Burrell. “As long as they are in my class, actively participating and learning … I think kids can learn no matter what they wear.”

Nor is it easy to enforce. “I have students who are respectful of school policy [so] I don’t have any problems,” said one history teacher, moments before spotting three students in her first-period class who were in violation.

Teachers are also having to worry more about their own new dress code. Sleeveless shirts without a sweater or jacket to cover the arms, for instance, are now outlawed. “The ventilation in this school definitely isn’t that great for us not to dress in layers,” Burrell said. Flip-flops are also banned for teachers, which brings up another judgment call: When does a sandal become a flip-flop?

Some students don’t mind the code, but plenty more resent it. The code is “a ridiulous way for adults to have more control over the students,” Paschal sophomore cheerleader Rebecca Thompson said.

Junior Corbitt Vann had another concern. “If everyone’s wearing the same thing, then is it easier to recognize gang members?” he asked.

The results of the policy aren’t all light-hearted. At the beginning of the school year, most high schools put violators into “in-house suspension,” meaning the kids had to sit in an auditorium or classroom all day without instruction. However, many schools have stopped doing that. At Northside High School, the staff brought in collared shirts from home that violators were made to wear, rather than having them waste days of school time doing nothing.

The school district is now studying whether to require uniforms in the high schools as well as the elementary and middle schools, possibly beginning next year.

If the results of this year’s dress code changes are any guide, the district may have to think harder about enforcement. If high school students and teachers and staff have figured out a way to turn a ban on t-shirts into a t-shirt selling boom, what could they do with a requirement for uniforms?

Paschal senior Jean McMahon was philosophical about it all. “Well, it’s great for fund-raising,” she said. “But I’d rather be able to wear what I want to school, rather than have to wear the [Paschal] Howdy Dance shirt once every week.”