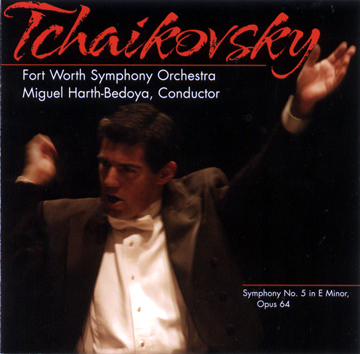 FWSO’s latest recording, of a September 2004 live performance at Bass Performance Hall of Tchaikovsky’s Fifth Symphony, makes for a decent Christmas gift. The performance of the symphony isn’t an unqualified success. Harth-Bedoya does a pretty good job of giving the piece its overall shape, but the odd-numbered movements are lacking that extra bit of oomph that would make this a great recording. On the other hand, the even-numbered movements do have that — you can understand the shouts of

“Bravo!” from the audience at the end. The real stars of this recording are the audio engineers at Bass Hall, who manage to capture the intimacy of the space without being claustrophobic, and do justice to the passages where the orchestra is in full throttle. If I were a music-lover from another city listening to this recording, I’d say this was an interesting orchestra, and I’d suspect it was capable of better. I’d be right.

Filling out the recording is the first movement of Tchaikovsky’s Serenade for Strings. It’s intended as a de facto encore piece, but it’s too long and diffuse to serve that purpose. And the c.d.’s liner notes are woefully inadequate.