Home Music Listen Up Aimee Mann
SHARE
Facebook
Twitter
When an interminably melancholic and arty rock singer-songwriter like Aimee Mann releases an album of yuletide tunes, you have to wonder: Whatever happened to Christmas? 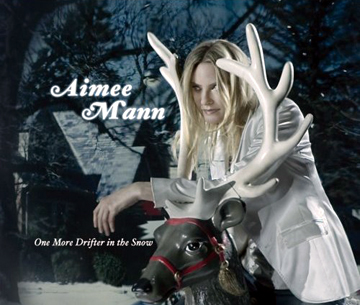 In fact, that question in the form of the holiday classic of the same name kicks off Mann’s new album of seasonal songs, One More Drifter in the Snow. The answer seems to be that rampant consumerism has done more to render December the 25th nearly unrecognizable than any talented interloper’s caroling.

The selection here comprises nine mostly thoughtfully selected classics. Mostly. The glaring exception is Mann’s take on “You’re a Mean One, Mr. Grinch,” an irredeemably childlike tune whose lyrics simply can’t be performed by anyone other than basso profundo Thurl Ravenscroft. Otherwise, Mann didn’t choose anything annoying or redundant. One More Drifter features the more beautiful of the season’s familiar titles, buoyed by fresh instrumentation and Mann’s calm singing style.

And as it appears smack dab in the middle of the album, “Mr. Grinch” serves as a nice capper to the previous, lighter tracks. The following tunes are richer, darker, and better. “Winter Wonderland” balances a nice string sound with twangy pedal steel and slowly chugging drums; “God Rest Ye Merry Gentlemen” has Mann singing the melody straight up and down before letting the swell of sound take over; and “Calling on Mary,” the contemplative Mann original that closes the album, is undoubtedly the best track.

While the record is not as inventive or heartfelt as Sufjan Stevens’ Songs for Christmas, it is another good example of a reputable hipster artist going against type and embracing normally dreaded seasonal tunes. But not everyone shares Stevens’ love of yuletide, making Mann’s lower-key effort a bit more accessible to listeners who generally avoid the holiday. One More Drifter in the Snow is in a way a throwback to the ’50s, harking to both Sinatra and Hank Williams, an attempt to salvage and bring back the old-fashioned, simple idea of peace on Earth.