Home Film Film Reviews No Kids Under 18
SHARE
Facebook
Twitter
Two years ago, Alfonso Cuarón directed a luminous adaptation of Harry Potter and the Prisoner of Azkaban and revitalized a movie series that might otherwise have died prematurely. 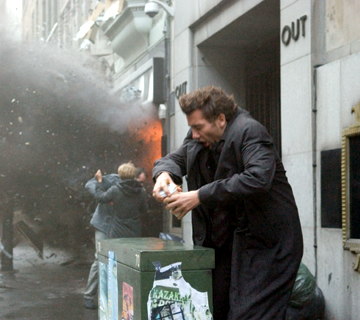 The studio bosses recognized his accomplishment and offered him loads of cash to stay on. Instead he bailed, citing the extreme pressures of handling a lucrative Hollywood franchise. Hard to blame him, but his latest film Children of Men doesn’t play like the work of a man who’s free of stress. Instead, it’s a shot into hell, a headlong plunge into a nightmare vision of the future. It’s pretty good, too.

The movie takes place on an earth where the entire human population suddenly became infertile in 2009. Fast-forward to the year 2027: The world has no children. As you might intuit, it’s not a happy place. In fact, the country of Great Britain looks much like present-day Iraq. The big cities are under martial law, while murderous gangs roam the countryside. Random terrorist bombings play into the hands of a dictatorial government that locks up illegal immigrants and suspected criminals in Abu Ghraib-like holding facilities. Corruption is rampant, and the religious fanatics (Christian and Muslim) parade through the cities, believing the world is suffering God’s punishment. Many sci-fi movies have been inspired by 1984 and its insanely well-ordered totalitarianism. The dystopian vision in this film is much closer to what CNN shows us every day, which is one reason why it feels so unnerving.

The story is about a hard-drinking British government drone named Theo (Clive Owen) who’s abducted off the street by agents of Julian (Julianne Moore), his ex-wife whom he hasn’t spoken to in 20 years. She now leads a terrorist group called The Fishes and needs his help to get one of her people out of the country. That person turns out to be a young woman named Kee (Clare-Hope Ashitey), who is secretly and miraculously about to give birth. This isn’t completely a good thing; if Kee’s pregnancy becomes public knowledge, the political ramifications could turn out unpleasantly for her and her baby. Theo concludes that Kee isn’t safe with the government or The Fishes and resolves to deliver her to The Human Project, an international organization of scientists and humanitarians that will do what’s best for her. One hitch: He isn’t sure if The Human Project actually exists.

If you’re familiar with the disturbing P.D. James novel on which this film is based, you’ll notice significant changes in the plot. The five credited screenwriters here invent characters and subplots out of whole cloth, yet the plot is streamlined and the chaotic spirit of James’ book comes through undiminished. Like Cuarón’s other films, this one is excellent at peripheral detail: piles of burning livestock in the meadows, offhand references to unspecified disasters, graffiti scrawled on the walls. (“Last one to die please turn out the lights.”) More than any recent film except possibly Minority Report, this movie captures the texture and feel of what life is like in this fearsome future.

This movie is also simply a great thriller, thanks to a couple of Cuarón’s simple techniques. For one thing, the camera seldom leaves Theo’s side, and we see all the horrors and atrocities either from his point of view or happening in proximity to him. When Theo’s car trip with The Fishes turns deadly and people inside the car are getting shot, we’re trapped in there with him even as the camera whirls around the interior to capture each passenger. Owen is in every scene, and his jaded, battle-weary toughness shows up well in a role where he never picks up a gun and frequently has problems finding proper shoes. (He spends a significant stretch of the movie wearing flip-flops.)

Cuarón also stages his action scenes in lengthy unbroken takes or cuts so unobtrusively that you can’t tell where he does it even if you’re looking. The lack of visible cuts leaves you with no place to catch your breath and gives rise to some bravura sequences such as the opener, when Theo narrowly avoids death walking out of his local coffee shop, and the terrific low-speed chase with Theo and Kee fleeing The Fishes’ compound in a car whose engine conks out as it’s rolling downhill. Best of all is the hellacious climactic sequence when Theo runs into an apartment building being shelled by government soldiers. The camera hurtles down hallways and up stairwells, casually taking in the deaths of Fishes and innocent bystanders alike as Theo searches for the kidnapped Kee, guided by the sound of her baby’s cries.

Children of Men ends with a hard-earned burst of hope, but you still walk out of it completely drained. The film’s frenetic yet fluid pace, the intelligence of its overall conception, and the all-too-plausible realism of its science-fiction future show Alfonso Cuarón has attained the highest levels of cinematic mastery. They also make the movie chilling, brutal, and deeply moving in its final scenes. Like the aftermath of an explosion, this movie shakes your world and leaves your ears ringing.