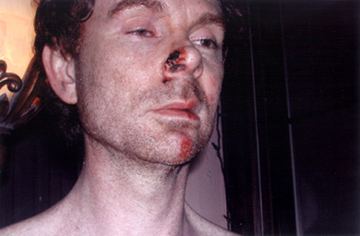 Hmm, how’s Hell-Mart sound? Customers keep calling Fort Worth Weekly to tell about knee-jerk decisions by store managers and employees and to portray off-duty Fort Worth police officers working security there as Gestapoids acting like they’re on steroids.

In October 2004, Fort Worth resident Janice Harrington was evicted from the store and cited for an assault that she said never occurred. She said a woman in front of her was in an express lane with a full cart, which Harrington had pointed out. The woman paid, and then told a security officer that Harrington had assaulted her. Despite the lack of witness collaboration, Harrington was ticketed for “assault by offensive contact.” The case was dismissed when her accuser and the police officer/security guard failed to appear in court. “If they are going to hire off-duty cops, that’s fine,” Harrington said at the time, “but don’t empower them to treat people like they are guilty. You don’t even get the benefit of a doubt — they just strong-arm you out of there.”

That same month, Tom Brasfield said Wal-Mart marked its fish items for sale but then charged a higher price at the register. He informed the store manager about the problem, but noticed when he returned the next day that the overcharges were still occurring. Preparing to file a complaint with store headquarters, he videotaped his cash register transaction to prove his point. An off-duty cop working security threatened him with arrest and made him erase the video. Brasfield complained to Fort Worth Police Department’s Internal Affairs but said he couldn’t get anyone to return his calls. “They just sweep it under the rug,” he said.

One thing Brasfield and Harrington had in common was a strong personality. Both got into clashes after standing up for themselves. Earlier this month, Mark Ferguson called to describe rough treatment he’d received at the store on Dec. 10, 2004; he appears to have done nothing to spur his predicament. On his lawyer’s advice, he waited until his suit against the company was settled before telling his story publicly. Wal-Mart settled the suit with a high-five-figure payment.

After completing his shopping that day, Ferguson’s merchandise and receipt were checked by the greeter, who then smiled and wished him Merry Christmas. As Ferguson, a hair stylist, stepped outside, he said, a teenager approached him and began asking for “the stuff.”

“I thought he was panhandling and I said, ‘I don’t have anything for you,’” Ferguson said.

The youngster was joined by another man, and another. Now surrounded, Ferguson thought he was about to be mugged. Then he saw a welcome sight. “I looked out of the corner of my eye and saw a policeman coming up behind me, and I was relieved,” he said.

Off-duty Fort Worth Police Officer J.D. Preston was working security. “He walks up behind me and says, ‘Do what they say,’” Ferguson said. “I was shocked at that and wondering why he would say that.”

Ferguson said the men were talking at the same time, and he was confused and unsure what to do. Preston decided for him. “He grabbed me by the shoulder and slammed me against the wall and busted both my lips, and he starts a barrage of curse words, calling me every name in the book like I had just raped his mother,” Ferguson said. “He kneed me in the gut three or four times and then takes my arm and slams me into the ground.”

Ferguson was writhing in pain and thinking the cop was an impostor and part of the gang that he believed was mugging him. “I could hear him saying, ‘I think I’m going to pepper spray him,’ and then he does it,” Ferguson said.

Ferguson screamed for police and said Preston responded by saying, “I am the police, don’t you recognize my uniform, you fucking moron?”

Ferguson said he was jerked upright, handcuffed so tightly that his wrists remained red and sore three days later, pushed back to the ground, and told to sit. One of the young men again told Ferguson to hand over the stuff. For the first time in the confrontation, Ferguson said, one of the men identified himself as a theft prevention employee and accused him of stealing c.d.’s. Finally, Ferguson understood what was happening. 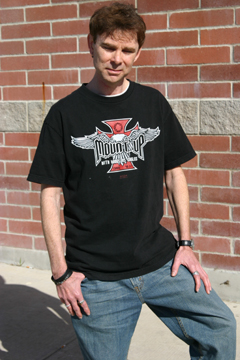 But there was a problem — he hadn’t stolen anything. In his possession was a bag of Christmas presents and a receipt showing he had paid in full. He was taken to Arlington Memorial Hospital and treated for scrapes, bruises, and a separated shoulder from being slammed to the ground. He was booked into jail and then bailed out by his mother. In the coming months he would take leave from work a half-dozen times to attend court sessions that were usually postponed.

In his report, Preston said Ferguson shoved the first theft prevention employee, Bobby Danals, and then “attempted to shove me out of the way.” Preston wrote in his report that he pushed Ferguson into a corner and “attempted to gain control of [Ferguson’s] hands while [he] continued to push me off of him.”

Preston said he was “unsuccessful in gaining control” of Ferguson “so I took [him] to the ground.” Preston was still unable to control Ferguson, and so he gave him a “distraction strike” on his back.

He ended his report by saying “no c.d.’s were located on the [suspect]; it is unclear of their whereabouts.”

Then things got weirder. Police didn’t charge him with shoplifting, and they didn’t apologize. They charged Ferguson with evading arrest.

A store manager later told Ferguson that everything was caught on video and so he might as well confess. Ferguson was elated — he said video surveillance inside and outside the store would prove he was falsely accused and show he was assaulted without provocation. He asked for copies of the videos but never received any.

Four loss prevention employees were involved in the incident, including one who stood 6 feet tall and weighed 230 pounds, according to police records. None was available to be interviewed — Wal-Mart’s current loss prevention manager said none of them works at the store anymore. Preston is currently on injury leave and could not be reached for comment.

It’s hard to imagine Ferguson being the aggressor against the younger, larger store employees or the big ex-Marine. He said he had never been in a fight, not even as a child, and had never been arrested before then.

Preston’s personnel file depicts a go-getter who “routinely leads team in arrests, citations, and calls answered.” His file contains no substantiated complaints, although he was cited once for “assault by contact” as a high school student 10 years ago.

After spending $4,000 on attorney fees and having court dates postponed time and again, Ferguson agreed to take 36 hours of anger management classes — at $15 per session — in exchange for having the case dismissed. His attorneys told him a trial could cost him another $6,000.

Ferguson asked the police department’s Internal Affairs office to investigate the incident but said he had difficulty getting anyone to return his phone calls. Police spokesman Lt. Dean Sullivan said an Internal Affairs investigation “shows the matter was closed as ‘not sustained’.”

Ferguson filed a civil lawsuit against Wal-Mart for his injuries and won. By the time Ferguson paid his attorneys a third, reimbursed his mother, and added up the money he had spent on medical bills and anger management classes, he had come out ahead by a piddling sum, he said, compared to his physical and emotional suffering. His settlement included a stipulation that he wouldn’t pursue litigation against store employees.

Wal-Mart officials were tight-lipped in the past when Fort Worth Weekly inquired about the Harrington and Brasfield incidents, and the store’s response to inquiries about Ferguson and its policies on security issues was similarly brief. “Unfortunately, I won’t be able to help you since we are unable to comment on settled cases,” said Wal-Mart senior communications manager Sharon Weber. “Also, your generic questions could be directly applied to the settled case, which we aren’t able to comment on.”

After receiving his settlement last year, Ferguson was still haunted by the incident. Feeling that police administrators were more interested in covering up for a fellow officer than in seeking the truth, he decided to share his story with the Weekly.

Looking back, he said, he sees nothing he could have done differently at Wal-Mart that day. He was shopping for his niece and nephew and had used a cell phone to call his sister to ask questions about what they might want. The cell phone was in a belt holster, and Ferguson theorizes that store employees might have seen him reaching for the phone and mistakenly thought he was stashing items in his pants.

“I’ve gone over that in my head so many times,” he said. “If they had just told me what they thought I had done, that might have resolved it, but they never told me who they were or what I had done” until after he’d been manhandled. “They showed me no identification. It was totally messed up.”