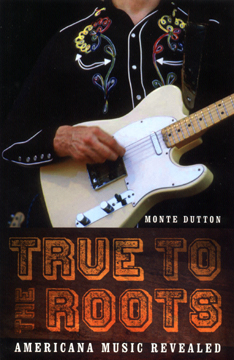 The title, True to the Roots: Americana Music Revealed, and introduction both suggest an analysis of roots music with perhaps some in-depth research on how it has survived the ages and evolved into a genre of entertaining work by commercially shunted-aside artists who are finally harnessing the advantages of the technological age and bringing the music to the masses.

Instead, it reads like a fan’s shoot-from-the-hip opinion based on a preconceived notion and a series of haphazard interviews with a smattering of artists, some famous, some semi-famous, some has-beens, and a few never-weres. In author Monte Dutton’s estimation, those who makes it big in Nashville are playing “crude vanilla shit,” while regional entertainers such as Jack Ingram, Jason Boland, Cody Canada, Stoney LaRue, and others have been overlooked by the corporate shills who obviously can’t discern their ass from a hole in the ground. Americana roots music “survives, endures, and even flourishes despite all efforts by the high, mighty, and monied to kill it,” Dutton writes. Quite a conspiracy theory, considering that numerous modern-day artists started out as nobodies recording their own albums and selling them from bandstands and eventually parlayed that into major label deals.

The book’s first chapter sets the confusing tone — it opens with Dutton waiting to interview Ingram before a show at Billy Bob’s Texas. Ingram is late, so Dutton spends several hours walking around the Stockyards, describing the scene, eating dinner, waiting around. Not exactly a barnburner of an opening. He watches Ingram perform and laments that the “remarkably talented, deeply profound observer of the human condition” doesn’t get much radio play or national attention. It’s a grievance repeated throughout the book. He says — and I’m paraphrasing — “Damn, these guys are good, but radio won’t play them. Wow, that sucks.”

Let’s face it: Radio has been dominated by commercial pap and corporate playlists for so long, who cares anymore? Commercial-free outlets such as XM, Sirius, and web-based stations, combined with the ease of finding roots music on MySpace, Amazon.com, and other indie-spirited sites, have practically rendered commercial radio and the conventional recording methods null and void. Why scream at an aged, impotent bully? All anyone needs to immerse himself in roots music these days is to own a computer and c.d. burner.

Dutton, a NASCAR writer by day, also pops off with opinions that don’t seem germane to his topic. For instance, three times in the course of this thin book he criticizes Elvis Presley, who he feels was overrated and undeserving of the attention he got, especially in a world where people like Ingram slave away in near-obscurity. Hell, Elvis embodied roots music when he first recorded hillbilly blues at Memphis’ Sun label in the 1950s. Sure, he came to symbolize excess later on, but what’s the point in bashing one of pop music’s most iconic and long-dead figures in a book about regional artists struggling to make a living in the new millennium?

But enough venom. Truth is, while the book is unsatisfying on an academic level, it’s a fun and easy read, written in a loose conversational style that makes it the perfect nightstand companion for a few days (it doesn’t take long to absorb these 211 pages). Dutton is best when he forgets his premise and simply interviews artists struggling to survive in a competitive field. Anyone who wants to seek music stardom ought to read this book — Dutton and his interview subjects share insights on songwriting, performing, and touring that will scare the faint-hearted far, far away from a business that can chew up and spit out even seriously talented folks.

Discussions with Robert Earl Keen Jr., Cross Canadian Ragweed, Jason Boland, and many others are often humorous, entertaining, and informative without being apropos to the book’s alleged theme. Cody Canada, speaking of his band’s song references to Jesus Christ and weed, says, “As you get older, though, I think it’s fair to say Jesus gets more and more important … in relation to the weed.”

Ed Burleson, who grew up in Lewisville, recalls a chance meeting with Doug Sahm. “He was into pro wrestling, of all things, and he mentioned the Von Erichs [a wrestling family based in Lewisville]. That’s how we got to talking.” Sahm ended up producing Burleson’s My Perfect World album. Mike McClure is quoted as saying something that had continuously crossed my mind while reading this book: “It’s just grassroots. If they play you on the radio, great. If not, who gives a shit?”

Slaid Cleaves’ stated reason for playing music echoes that of many Americana artists, from the Appalachian Mountains to the Mississippi Delta to Cowtown’s honky-tonkiest dives. “One of the most wonderful things about being a musician is making a connection with people,” Cleaves says. “Other things are secondary — if you’re making money at a gig or not, if there are beautiful people at a gig or not — as long as you are making a connection.” These artists have obviously connected with Dutton, and his fervor for them is both a boon and bane. His passion spurs him to hang out backstage in the wee hours, deal with the occasional head trip, banter with stoned and drunken artists, and endure encounters with management types who are full of themselves, all in order to capture portraits of these artists. But not every artist who is talented is going to find acclaim. That doesn’t make them failures or heroes, and nobody is to blame. It’s just an old song that repeats itself generation after generation.