Home Music Listen Up Blood of the Sun
SHARE
Facebook
Twitter
Blood of the Sun is a new local band, built from the spare parts of Sourvein, Storm at Sunrise, Rotting Corpse, and a couple of other hard North Texas groups. 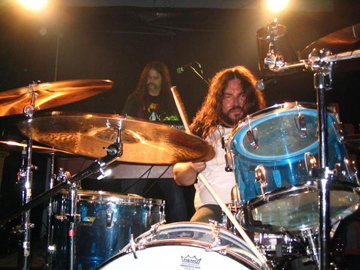 But there’s nothing really new about ’em. Singer-drummer Henry Vasquez, organist Dave Gryder, bassist Roger Yma, and guitarists Ty Tompkins and Rick Hurley are as dazed and confused as your stoner uncle. From their bell-bottom jeans to their monster stacks to their loud, fuzzy stomp, Blood of the Sun is firmly planted in a gada da vida, baby, begging the question: Why listen to their new album, In Blood We Rock, when your old UFO, Deep Purple, and Humble Pie records work just fine? Well, for one thing, those three bands are long gonzo. The best you’re gonna get these days is Richie Blackmore at a séance. The guys in Blood of the Sun have been around, yes, but they have fresh legs and will be coming to an arena (read: dive bar) near you.

Second, Blood of the Sun can hang. The same reason why you’d take Force It off your hi-fi and put on Made in Japan, then take off Made in Japan and put on Town and Country is precisely why you’d make room on your turntable for In Blood We Rock. And you’ll be able to: In addition to the polycarbonate copies of the album that were released earlier this month, a limited number of vinyl copies will be available in a couple of weeks, also on Arlington’s Brainticket Records. We’re not overstating the fact here. Blood of the Sun can hang. Unlike retro poseurs Fu Manchu and Nebula, Vasquez and company don’t just crank up the reverb and try to win you over on tone alone. They put some thought — actually, a lot of it — into the structures of the songs, the solos, the vocal melodies, the lyrics (mostly about bongs, bong hits, and bong architecture), and, most importantly, the riffage, ‘cause a stoner rock band without killer riffage is just boring, killer weed in the air or not.

And finally, Blood of the Sun is Blood of the Sun, and if 1974 ever comes around again, y’all will be smoking out to In Blood We Rock as often as to anything by UFO, Deep Purple, or Humble Pie.