Home Arts Stage Shoestring Budget
SHARE
Facebook
Twitter
Every time Metropolitan Classical Ballet goes onstage, the Arlington-based, Russian-influenced company dances a fine line between ambition and reality. Co-directors Paul Mejia and Alexander Vetrov are tops in their fields and have the potential to take the company to great heights. But MCB is small — it lists only 18 dancers — and money is tight. 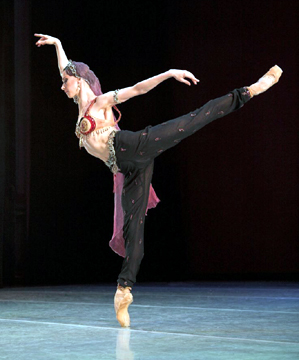 Which doesn’t hamper Mejia so much. His specialty, the Balanchine repertory, was created for the fledgling New York City Ballet in its hungry days of the 1950s and ’60s, and has minimal production demands. Mejia’s own ballets are equally small in scale, and putting them on doesn’t break the bank. For Vetrov, the problem is more obvious: how to stage viable versions of great, Russian ballets with limited resources. He manages a satisfying Nutcracker every Christmas, and earlier this season he gave us an enjoyable Creation of the World — his version of the Soviet romp was rickety around the edges but full of exceptional solo work. In the past, he has also presented a brilliant condensation of Spartacus.

MCB’s program last Saturday in Bass Performance Hall, however, showed up his problem — and more than usual. While Mejia effortlessly revived his salute to noted Broadway songwriter Richard Adler, Notes On My Life, for 12 dancers in simple costumes, Vetrov got into deep water with a two-act version of La Bayadère. An 1877 juggernaut that can use some judicious pruning, the ballet has appeared in many guises. The most complete was a 2001 production staged by the Kirov/Maryinsky company (formerly known as the Saint Petersburg Imperial Ballet), a restoration of the definitive 1900 revival. I saw the Kirov/Maryinksy in New York, and the five hours of pantomime and pageantry evidently weren’t to everyone’s taste. During the first intermission, a puzzled young woman nearby asked her equally confused date, “Is there any dancing in this ballet?”

MCB’s version has memorable dance sequences, and Vetrov has the principal dancers to do them justice. Olga Pavlova danced the title role with determination and vulnerability. Summoned to entertain at the wedding of Gamzatti, the rajah’s daughter, the temple dancer La Bayadère discovers that her faithless lover Soler is the groom. After a fight with the bride, who flees, she receives a bouquet that conceals a deadly snake that does its job, and she dies. La Bayadère is visited in the Kingdom of the Shades, or the afterlife, by Soler, danced by Andrey Prikhodko, whose work in the role revealed a newfound poise and maturity. Full of remorse, Soler appeals to the Sun God for help, takes a couple of hits from an opium pipe, and joins La Bayadère in a duet of forgiveness.

Gamzatti was danced by Marianna Ryzhkina, fresh off the plane from Moscow. She barely had time for a rehearsal, which probably accounted for the cautious quality of her duet with Prikhodko. Her solos, though, with high-speed fouettes and supercharged turns around the stage, dazzled everyone. Anatoly Emelianov danced the Sun God with great style. All of the individual dancing was first-class. It was in the larger ensembles that Vetrov got into trouble. His two-act ballet included not only the heavy-duty solos but the long procession to the wedding and the subsequent corps dancing that apparently remains beyond his grasp right now. Skimpy in number and under-rehearsed, with students from the MCB school pressed into service, the corps looked more dance recital than professional company.

Unfortunately for viewers but to Vetrov’s credit, he did not attempt the slow-motion entrance of the female corps in the Kingdom of the Shades scene. The signature sequence of the ballet, it is not technically demanding, but the ensemble requirements are many and complex. The ballerinas enter one at a time on a platform upstage, do a simple bent arabesque, take two steps slowly down a ramp as the next dancer appears behind, and repeat the figure one after the other in a line that eventually snakes back and forth across the darkened stage. The effect is mesmerizing. The Russian companies use 32 dancers. American Ballet Theater has 24. MCB, with a corps of 16, could make it work, but keeping the dancers evenly spaced, with arms at the same level moving without a bobble at the same tempo, would take months of preparation. (An interesting footnote: Lev Ivanov, who later choreographed the second act of Swan Lake, danced the first Soler and may have found inspiration for his white swan ensembles in memories of this scene.)

Another problem here was the time needed between acts for the dancers to change costumes. It took 30 minutes, and more than that between ballets, as the dancers prepared for Notes on My Life. A lot of attendees left before it started. And that’s a shame, for Mejia’s breezy look at the composer’s familiar tunes from The Pajama Game and Damn Yankees, seen here before, sends you home with a smile. For La Bayadère, Ron Spigelman led the MCB orchestra through the little-known Leon Minkus score as if he’d known it all his life, and, with Adler’s music, he had great fun bringing infectious energy to the popular tunes.