Home Arts Art Alarming Heights
SHARE
Facebook
Twitter
Fact: There are more important examples of Modernist and contemporary public architecture in Fort Worth — three — than in any other Texas city, possibly the entire Southwest: the Amon Carter Museum (Philip Johnson), the Kimbell Art Museum (Louis Kahn), and the Modern Art Museum of Fort Worth (Tadao Ando). With the forthcoming addition of Legorreta + Legorreta’s Fort Worth Museum of Science and History, the city’s cultural renown will remain inviolate. 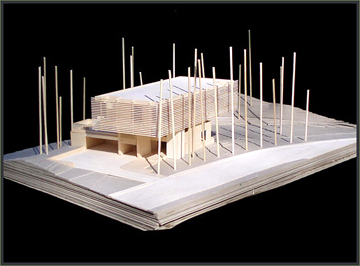 The bad news: Another Texas city is gunning to replace Fort Worth at the top. The usurper won’t be the most likely suspect, Houston. Instances of public architecture in Texas’ most populous city remain scant, such is the price of preserving the Lone Star State’s rugged-individualist, hyper-capitalist spirit. The upshot is that money flows skyward in Houston. The commercial architecture there — with pieces by Johnson; I.M. Pei; Robert Stern; Skidmore, Owings, and Merrill; and other leading practitioners of the trade — rivals that of Los Angeles, the 800-pound gorilla of handsome commercial architecture outside of the Midwest and Northeast. No, the executor of the coup stands to be our neighbor to the east.

Spearheading the charge is the Dallas Center for the Performing Arts. Due to be completed in 2009, the 10-acre campus will house several North Texas performing arts groups and feature work by heavies such as SOM, Sir Norman Foster (Foster + Partners), and the Office for Metropolitan Architecture, helmed by the rock-star of contemporary architecture, the appropriately awesomely named Rem Koolhaas. Equal in scope and grace to New York City’s Lincoln Center, Dallas’ performing arts complex may change not only the city’s compositional form, from one whose most identifiable characteristic is a glittering, skyscraping ice-cream cone to one whose horizontal contours also happen to function as harmonious, inviting public spaces. The new center also may change downtown Dallas itself, from a haggard, exhausted resource into an inspiring and safe international metropolis.

Right behind the arts center in the revolution is the Trinity River Corridor project. Several “signature” bridges designed by starchitects will cross the winding waterway at various intervals, distinguishing Dallas as the city with the most contemporary (and expensive) bridges not just in North Texas but the world. The third wave is one of the most progressive residential developments in the country. Urban Reserve, located on the east bank of Upper White Rock Creek, introduces Modernist and architected single-family speculative tract housing into North Texas’ hodgepodge of cottages and colonials, Tuscans and Tudors. Think flat roofs and fake façades rather than houses of seven gables and protective (or confining?) white columns. At the vanguard of a burgeoning nationwide movement, developer Diane Cheatham’s 13-acre project is further evidence that, from the vantage point of today, Modernism isn’t as foreboding as it seemed during the height of its popularity in the early 1970s. Urban Reserve and similar housing developments apply to cul de sacs the philosophy of Target superstores: offer exceptional contemporary design at reasonable prices. Nearly all of the 50 proposed dwellings have already been sold. 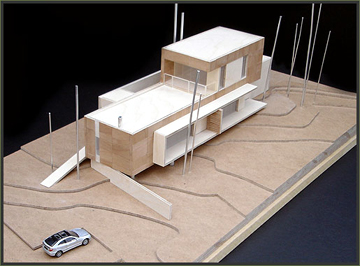 Coupled with the performing arts center, Urban Reserve will put Big D on the map, as an international destination and a place for design connoisseurs — rich and not so rich — to call home and be congratulated on their urbanity. Over the past few years, Dallasites have been in the dumps: the death of Deep Ellum, their formerly celebrated live entertainment district; the perceived increase in violent crime; their irrational and dangerous, deep psychological investment in perennially average sports teams. But if all goes as planned, folks in the 214 might be singing a different tune in a few years, and they’ll have Fort Worth partly to thank. Three words: Trinity. River. Vision. In big cities whose riverfronts haven’t been commandeered by piratical gambling boats, “riverfront development” has typically meant “family fun.” Nothing against families, but the market on family fun here is currently cornered, and nicely, by Sundance Square. Maybe Fort Worth’s planning department would do well to focus attention elsewhere, like on eradicating blight or pumping up the public art program. Simply put, if you look at the transitional period in which Dallas and Fort Worth both find themselves, you will see one city working toward becoming a place to live, work, and retire, and another trying to become a tourist trap.

Fort Worth, like Dallas and other growing Southern cities, has been bracing itself for a population boom. In keeping with the tenets of smart growth, eyesores are being remodeled into lofts or apartments, and abandoned buildings are being dusted off and refitted for mixed uses. However, one of Fort Worth’s answers to planned neighborhoods is Idlewild — a 10-acre expanse of red bricks, arches, and street lights gussied up as gas lamps — that will look exactly the way it sounds: like a trip back to the 1920s. No one is expecting Urban Reserve Phase II to pop up here. But as Dallas boldly looks forward, Fort Worth should think twice about looking back. In other words, fellow Cowtowners, get your digs in at Big D while you can.