The opening scene of Harry Potter and the Order of the Phoenix takes place in brilliant sunshine, which we don’t often see in these movies. 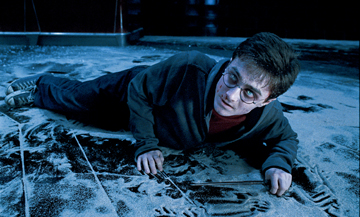 This comes courtesy of David Yates, the fourth different director in this series and a first-time filmmaker brought over from British television (The Girl in the Café, State of Play). Yates layers on the grit in the early scenes here — when the ghostly Dementors turn up in a London suburb and attack Harry (Daniel Radcliffe) and his cousin Dudley (Harry Melling), the sequence looks like something out of 28 Weeks Later. It’s an encouraging sign. There are many different ways to do a Harry Potter movie, and there’s every reason to expect the remaining movies to hold more surprises in store. Unfortunately, this installment doesn’t quite deliver on its early promise.

One of this movie’s major handicaps springs from its source. The fifth book in the series is the thickest one so far, yet not a whole lot actually happens in it. J.K. Rowling spends much of the novel deftly filling out the characters’ backstories and the detail of the wizarding world. The latter comes off as a place much like Britain in the late days of Tony Blair’s government, with the Ministry of Magic presented as a corrupt regime that’s clinging to power and ignoring the real dangers to society in favor of using the mainstream newspapers to demonize people like Harry and Professor Dumbledore (Michael Gambon) who try to point out those dangers.

Harry comes face to face with one of the status quo’s chief protectors in Hogwarts’ latest Defense Against the Dark Arts professor, Dolores Umbridge (Imelda Staunton). A petty, passive-aggressive, pencil-pushing bureaucrat who covers the asses of people in charge and nurses a sadistic streak beneath her soft-spoken, exquisitely mannered façade, Professor Umbridge is the most scarily plausible villain in the whole Potter oeuvre to date. The movie includes a famous scene from the book in which she doles out an innocuous-seeming punishment to Harry that turns into a torture session, and it’s every bit as hair-raising on the screen as it is in print.

The scenes involving this character are the best ones here, as Umbridge morphs from minor annoyance to full-blown terror, strong-arming the other professors, banning every activity that’s remotely subversive, recruiting a personal network of students to spy for her, and generally turning Hogwarts into a nightmare worthy of Orwell or Pink Floyd The Wall. The perfectly cast Staunton plays the role with the unsettling nervous giggle of someone who’s hellbent on keeping the world in perfect order, and she uses her diminutive stature to good effect during a funny bit where she squares off against the much-taller Maggie Smith on a staircase. Yates draws out the humor in Umbridge’s education reforms and also contributes some nifty visuals during Harry’s visit to the Ministry of Magic headquarters in London, as well as the climactic confrontation between Dumbledore and Voldemort (Ralph Fiennes).

These, however, aren’t quite enough to compensate for the director’s many small failures in form and tone. The movie trundles along at a good clip and segues between scenes smoothly, so that it doesn’t feel overlong at 138 minutes. Within themselves, though, the scenes often lose focus and grow talky. Michael Goldenberg steps in as screenwriter for Steve Kloves (who did all the previous movies and supposedly will be back for the sixth), and you really wind up missing Kloves’ insouciance and wit. Yates directs with admirable logic and precision, but he never builds up the emotion like the directors of the last two films did. Harry’s friendship with Ron and Hermione (Rupert Grint and Emma Watson) is poorly developed, and his awkward flirtation with bereaved schoolmate Cho Chang (Katie Leung) doesn’t ping the way it should.

The revelation that Harry’s martyred dad was a schoolyard bully, truly disturbing in the novel, gets fumbled here. When our hero sees his godfather Sirius Black (Gary Oldman) killed near the end, Yates switches off the sound so that we don’t hear Harry screaming. It’s exactly the wrong move for a movie that’s never in danger of overheating. Even Slawomir Idziak’s cinematography looks washed-out and dry. If the Chris Columbus-directed first two films were too cute, this one swings too far in the other direction. The Order of the Phoenix is cold, distant, atonal. Of course, few people will be using this film as their introduction to the Harry Potter universe, and the millions of moviegoers who are totally invested in the series will stick through the flaws here. Whatever disappointment we may feel at this installment will be tempered by hope for the final two films. Harry Potter and the Order of the Phoenix isn’t really that bad, but in the wake of The Prisoner of Azkaban’s splendors and The Goblet of Fire’s tragedy, it’s still a noticeable letdown.