When people talk about Hollywood franchises, they never seem to mention the Bourne films. 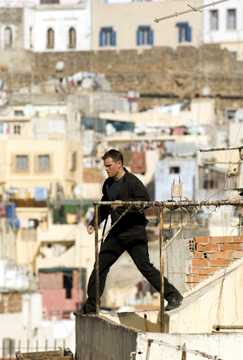 The two previous movies starring Matt Damon have grossed more than half a billion dollars combined and earned generally respectful if not glowing reviews. Yet nobody seems to love them. I’ll put it this way: Do bookstores hold Robert Ludlum parties? Do internet fansites parse the possible motivations for Bourne’s CIA allies and nemeses? Do people line up at ticket windows dressed like Jason Bourne? (Actually, Bourne dresses to blend in, so folks probably do so unwittingly.)
Aggressively re-jiggered for the big screen from Ludlum’s Cold War-era spy novels, the Bourne from the movies is by definition an ill-defined character, who starts off as an amnesiac and frequently doesn’t know his own strengths until an occasion calls on him to speak Russian or fight off a killer. When he’s not doing spy stuff, he’s busy burrowing into the woodwork rather than prancing around the world in fancy cars and tuxedos. His ghostliness makes him a formidable opponent, but it also tends to drain his movies of personality.

The third film in the series, The Bourne Ultimatum, aims to change this. Finding fresh motivation for Bourne is always a challenge with this series, so here he starts to remember more of his past. When a British reporter for The Guardian (Paddy Considine) seizes on a CIA security breach and learns about the program that created Bourne, the super-spy follows the journo’s trail, looking to track down the people who deprived him of a normal life by making him into a killing machine. The reporter gets way too easily rattled for a man in his position, which is one of several gaps in the storyline — a much bigger one is the wildly improbable coincidence that allows Bourne to meet up once again with CIA intel analyst Nicky Parsons (Julia Stiles). Yet only the sharpest eyes will detect these, because the movie is so smoothly directed by the Englishman Paul Greengrass, who helmed The Bourne Supremacy before winning an Oscar nomination for his work on United 93. Purely as a piece of action cinema, The Bourne Ultimatum reaches an even higher pitch than either of those movies.

The film runs by like a blur, but the bulk of it is in three distinct set pieces separated by geography: Bourne trying to steer the reporter away from CIA killers in a crowded Waterloo Station in London; a hitman (Joey Ansah) in Tangier boomeranging back on Bourne and Parsons after they’ve diverted him from his intended target; and a climactic footchase/car chase through Manhattan’s clogged streets. Greengrass proves himself a master of drawing out the tension through these long sequences, kaleidoscopically shifting locations, points of view, and sources of danger. The New York chase features Bourne shaking CIA killers off his tail by leading them into a firefight with NYPD cops, and the Tangier sequence is a virtuoso piece that goes a good 15 minutes without a single line of dialogue, with the hitman playing cat-and-mouse with Parsons in an apartment building while Bourne leaps from rooftop to window trying to catch up with them.

Scarcely less pyrotechnic is the acting back at the CIA field office in New York, where internal investigator and Bourne sympathizer Pamela Landy (Joan Allen) spends much of her time fuming at deputy director Noah Vosen (David Strathairn), who wants to terminate Bourne to cover up the program’s existence, even going so far as to order Landy’s underlings killed when they interfere. Whereas Allen made Landy into a cooler-than-cool presence in The Bourne Supremacy, here she shows some fire when matched up against Strathairn’s patrician schemer. The scenes that they share rehash a well-worn debate, but the sparks that fly between these veteran actors are well worth watching, as is the frustrated curl of Strathairn’s lip during a phone conversation with Bourne, when Vosen realizes that Bourne is calling him from the phone in Vosen’s office.

There’s a stinger at the end of this spy tale that does even more to distinguish The Bourne Ultimatum from its two predecessors. The revelation that Bourne has no one but himself to blame for his situation strikes a note that resonates with the running Landy-Vosen subplot. Like many foreigners who look up to America, Greengrass has no doubt been dismayed by the incompetence and Machiavellian callousness displayed by the current White House while fighting real-life threats to security. The heroes of this movie, Bourne and Landy, are the Americans who look to their better angels instead of using the ends to justify the means. Not many Hollywood action thrillers make so much out of moral scrupulousness. That, and the ability to use a police car effectively as a battering ram, will get you a long way.