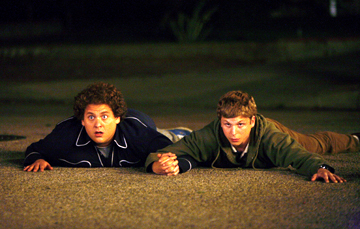 The proudly Jewish Canadian actor isn’t exactly new on the scene. His film appearances have tended to announce themselves loudly, with his voice that sounds like a pneumatic drill hitting asphalt, and a burly frame and abundance of facial hair that make him look older than his 25 years. He was still in his teens when he established himself as a member of Judd Apatow’s crew, playing sharp supporting roles in the TV shows Freaks and Geeks and Undeclared, and then later in the film The 40-Year-Old Virgin — who could forget his game of “You’re so gay” with Paul Rudd or his monologue about his depression brought on by a Tijuana sex show? (“We all just felt bad for [the woman]. … I kinda felt bad for the horse.”) This year Rogen’s star has gone nova after playing the lead role in Apatow’s Knocked Up and now serving as both co-writer and co-star of Superbad. While neither movie is quite as funny as the hype indicates, the latter film is definitely the better one, and it shows that as good as Rogen is onscreen, his offscreen talents might be even greater.

Michael Cera and Jonah Hill play high school best friends named Evan and Seth, which mirrors the names of screenwriters Rogen and Evan Goldberg, who are childhood pals in real life. The onscreen Evan and Seth are dweebs who obsess about sex even though (because?) they can’t get laid, and they’re forced to take stock of their lives one day late in their senior year. When Evan hears that the girl he likes, Becca (Martha MacIsaac), is throwing a party at her house in her parents’ absence, he finagles invitations for himself and Seth by promising to cater the liquor. These two clowns’ attempts to obtain the alcohol and transport it to Becca’s house form the entire plot. The movie has the buzzed ambiance of Dazed and Confused and the one-strange-night shape of Harold and Kumar Go to White Castle, and if it never rises to the highs of either of those movies, there’s no shame in that. The DELETE (which scores some extra points for depicting the girls in the movie as something other than one-dimensional objects of lust) is larded up with profane bits of humor like the early sequence when Seth confides to Evan that he used to obsessively draw penises as a child. Much different is a scene when our two heroes find their way into a grown-up party in a dangerous neighborhood, and Evan has to sing for his life, serenading a roomful of crack-heads with an a cappella rendition of “These Eyes.” The movie could have used a few more surreal bits like this to balance out the sex jokes. Most of them come from Hill’s Seth. The corpulent, frizzy-haired Hill has a way with a punchline that can liven up bad movies (Accepted, Evan Almighty) and good ones (Knocked Up), but here he’s a bit repetitive, and it’s disappointing to see him come up just a bit short when handed a lead role.

A large part of the film is stolen by bespectacled newcomer Christopher Mintz-Plasse as Fogell, a super-geeky hanger-on whose company Evan and Seth usually tolerate more than enjoy. On this day, though, their liquor run depends heavily on Fogell’s new fake ID, which identifies the preadolescent-looking kid as a 25-year-old named McLovin, with no first name appended. This subplot spawns what will undoubtedly be our pop culture’s next annoying catchphrase (“I am McLovin!”), but it also leads into some lengthy business between Fogell and two of the worst cops in movie history (played by Rogen and Saturday Night Live’s Bill Hader). The sheer diversity of their incompetence is dazzling. Every time you think you know what kind of bad cops they are, they manage to screw up in a new way. This part of the film hangs loose from the rest, and director Greg Mottola can’t cover up the jointures. Still, Mintz-Plasse plays the well-worn role of the high-school nerd as if he were the first actor to do it. Whether he has any sort of range remains an open question, but the freshness and zest he brings to this role are undeniable. Cera and Hill take the movie back, though, when Evan and Seth finally work out the issues over their impending separation, with Evan due to go off to Dartmouth while Seth has to content himself with the state college. The writers and actors do terrific work capturing the fallout from this situation, and the pair’s drunken declaration of love for each other while bunking down in sleeping bags on a basement floor is as funny and touching as anything in this year’s movies. For a comedy as anarchic and filthy as Superbad to end on such a convincing note of McLovin is an unlikely triumph.