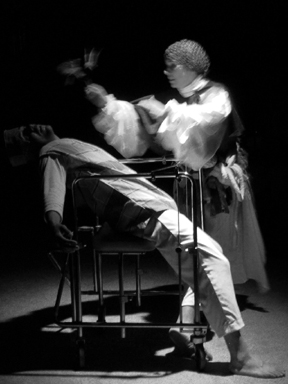 Before that, though, the Italian playwright was well-known in his native country for his farcical comedies brimming with politically explosive satire, which often got him in trouble with the law and rabble-rousing fascists. By contrast, Roberto Arlt is much lesser known. An Argentinian writer of German and Italian extraction, he came up during the High Modernist period and brought the trend to South American literature, incorporating all manner of words into his experimental prose: scientific concepts, criminal slang, Buenos Aires regionalisms, and dirty jokes. (You see this particularly in his novel The Seven Madmen.) His novels and plays are riddled with the grotesque and the fantastic. His premature death at age 42 curtailed his fame, but his influence lived on in the likes of Jorge Luis Borges and Gabriel García Márquez.

Maria Patricia Urbina’s Desvarío Adentro Afuera Crueldad is a Spanish-language theatrical piece adapted from Arlt’s Saberio the Cruel and Fo’s The Slaughter of the Innocents, the latter a typically black-comedic take on the Nativity story that features two bickering soldiers carrying out Herod’s murder of the Israelites’ children. The show marks the debut of a new theater troupe called Flor Candela Teatro. Here’s hoping Fort Worth welcomes it in style.