Home Film Film Reviews Arabesque
SHARE
Facebook
Twitter
The Kingdom is the fourth movie directed by Peter Berg, and it’s obviously his bid to join that elite club of filmmakers whose action thrillers appeal to both the popcorn-eating masses and the socially conscious moviegoers. 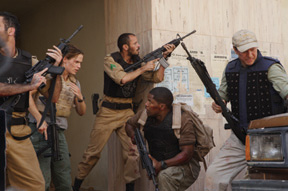 Members Steven Spielberg, Michael Mann, Alfonso Cuarón, and Paul Greengrass are among the best filmmakers in the world, and it’s no stretch to think that the younger directors are the future of mainstream entertainment. Berg’s spatial skills come up the tiniest bit short of theirs. His action sequences here don’t match the first 20 minutes of Saving Private Ryan, the shootout in the middle of Heat, or the finale of Children of Men. Still, the fact that we’re making these comparisons indicates how good The Kingdom is, and if Berg isn’t quite in the same class as those other guys, he’s close behind. The film begins with a terrorist attack on a softball game being played by U.S. government employees and their families in Saudi Arabia. It’s straight from the first page of the terrorists’ playbook, though no less lethal for that, and it leaves more than 100 people dead, including some FBI agents. Back in Washington, Special Agent Ronald Fleury (Jamie Foxx) wants to fly a bureau investigative team to the Middle East immediately to help identify the culprit, but even with the backing of the FBI director (Richard Jenkins), he has to pull strings like mad to make that happen.

Fleury’s team is portrayed by high-wattage stars who figure prominently in the movie’s ads (Jennifer Garner, Chris Cooper, Jason Bateman), but none of their characters plays as pivotal a role as Col. Faris al-Ghazi (Ashraf Barhom), the Saudi officer who’s charged with providing security for the Americans. Al-Ghazi is a prickly customer who barks out orders and freely expresses his irritation at the agents’ constant use of profanity, but Fleury can tell a frustrated local cop when he sees one. He quickly deduces that al-Ghazi is a trained detective who’s been passed over for political reasons when he should be heading the entire bombing investigation. Fleury’s razor-like Beltway political instincts prove scarcely less sharp in the Middle East, and he gets the colonel on his side by talking him up to the Saudi government. The alliance and eventual friendship that develops between the two lawmen makes for a terrifically well-acted human drama that prevents this thriller from becoming mechanical. Merely holding the screen with these big Hollywood stars would be an achievement for the handsome Israeli Arab actor Barhom, but he also delivers a performance that’s magnetic in its own right, as a man with a ton of reservations about both the Americans and his own government who puts those considerations aside to concentrate on catching the bomb-makers.

The terrorist attack is a prelude to the film’s three main sections. While the first is all about the diplomatic shufflings that allow the FBI team entry into Saudi Arabia, the second is a crime procedural about the agents’ sifting through the evidence. This middle section is spiced up considerably by the foreign environment; the agents chafe under the harsh political and cultural restrictions placed on them. Al-Ghazi’s men become enraged when the team’s forensic pathologist Mayes (Garner) tries to conduct autopsies on their murdered colleagues — this is how she learns that an infidel isn’t supposed to touch a dead Muslim’s corpse. The movie erupts in the final section, as the agents become targets while zeroing in on the shadowy bomb-maker responsible for the attack. This is where Berg the action director falls short, though he’s still pretty good, especially in the lengthy climactic firefight in which not only the terrorists but their neighbors as well appear to be kitted out with assault rifles and delighted to take potshots at the agents and al-Ghazi’s cops. Seeing the good guys at last battle the bad guys face-to-face is satisfying and even necessary to release all the tension that the film has built up.

To their credit, Berg and first-time screenwriter Matthew Michael Carnahan don’t leave it there. After all, one could argue that we got into Iraq because we thought it would be like an old-school action movie, with the bad guys dying and the good guys walking away triumphantly. These filmmakers know better and take a coldly realistic view of the region. When Mayes goes to give a piece of candy to a little Arab girl, Berg and Carnahan not only deliberately undercut this cloying scene but do it in the cruelest possible way. The movie ends with people on both sides making the same vow, “We’re going to kill them all.” That note of ambiguity makes The Kingdom an action thriller very much of our time.