What’s in a name, anyway? Would a Frank Black by any other name still be weird?

Or better yet, will he still be inextricably tied to the legendary band he used to front, The Pixies? Apparently, it doesn’t matter. Between the death of the Pixies and their brief pay-the-bills resurrection last year, Frank Black has put out around 14 albums as himself, some with his band The Catholics. However, with Bluefinger, Frank Black has reclaimed the nom-de-guitar credited to the band that made him famous, Black Francis. And with the return of Black Francis comes the return of weirdo post-punk pop.

Bluefinger opens with the jangly, driving “Captain Pasty,” whose closing couplet begins, “Hang on baby, I’m really fast / Present’s future, and the future’s past.” And while this might sound like a typically cryptic Black Francis homily, it’s a metaphor for the rest of the album, as it sprints, staggers, and lopes to the finish. Yes, it’s reminiscent of the Black Francis of old, but it is purely a creature of its own. Bluefinger rides on Surfer Rosa’s urgency to deliver the lyrical surrealism of Doolittle, to name just a few influences, all wrapped in Black’s trademark trebly surfer-on-acid tone. So, in a lot of ways, it’s a new Pixies record.

Except when it’s not, which happens occasionally. While the quiet-loud-quiet-dynamic of the Pixies’ best songs sneaks into Bluefinger here and there (“Test Pilot Blues,” “You Can’t Break a Heart and Have It”), the whole thing is pretty loud. Black finds room for classic pop structures. See: “She Took All the Money” and “Your Mouth into Mine,” which seems to imprison the ghost of a Van Morrison song in an off-kilter brothel. But Black here favors jagged stops and thorny chord progressions.
Perhaps more interestingly, the whole thing is an ode to a Dutch art-punk named Herman Brood who committed suicide by jumping off the roof of the Amsterdam Hilton. In “Angels Come to Comfort You,” Black pays tribute to Brood with little metaphor or irony. And given his penchant for going his own way, whether it be dissolving a critically acclaimed band or flip-flopping stage-names, his fixation on a guy who was the Dutch embodiment of sex, drugs, and rock ‘n’ roll makes a lot of sense.

Why Frank Black reclaimed the name Black Francis is anyone’s guess. Perhaps it’s his age, or maybe the Pixies reunion was a lot of fun. Whatever the reason, his return to loud, distorted weirdness is a Dutch treat. Bluefinger is a welcome reminder of why you liked “Debaser” and “Gigantic” in the first place. 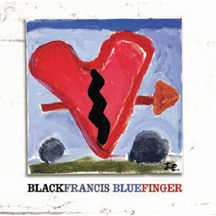