You can celebrate this Halloween season with a visit to any of the Fort’s elaborately themed and bedecked haunted houses. 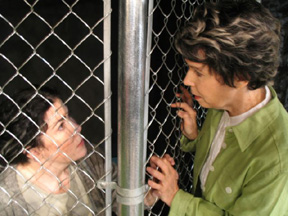 Texas is the nation’s unrivaled leader of commercial seasonal haunted houses. Or you can rent all 1,237 Halloween movie sequels and hunker in for a marathon on the digital flat-screen. Just save an evening or an afternoon for — horrors! — live theater, because Circle Theatre has expertly mounted a ghost story full of bogeymen: incest, spousal abuse, alcoholism, and, most prominently, the specter of the unlived life. The bad news is, this stuff doesn’t disappear on November 1. It goes all year round. (The societal ills, not the Circle’s ghost story, that is.)

Above all, British playwright Alan Ayckbourn’s Snake in the Grass — given a witty, malicious, and fully rounded Circle staging under the direction of Robin Armstrong — does not play like just an eerily lit Oprah show. The themes of addiction, abuse, rage, and guilt are drawn with considerable subtlety and skill by a terrific trio of female actors — none of them forgets that the DELETE is not great art. Having pumped out some 70 plays in his phenomenal career, Ayckbourn is more of a consummate craftsman than a visionary. But Snake in the Grass doesn’t need to be lofty in its ambitions. It is intelligent, suspenseful escapism for adults, and even the Great Pumpkin knows this is hard to come by these days.

Director Armstrong has an intuition for how well the English do malice and manipulation. Ayckbourn’s show concerns the British sisters Annabel (Elly Lindsay) and Miriam (Emily Scott Banks), who are reunited after many years by the death of their dictatorial father. Both are deeply bitter in different ways: Annabel escaped the tyrant early in her life and maintained little contact with the family yet found her own subsequent professional and romantic decisions to be a bust. Miriam stayed beside the old monster until his death, only occasionally daring to rebel, but she also employed an opportunistic private nurse named Alice (Lisa Fairchild) for help. Alice returns to the garden of the sisters’ estate with a gleeful extortion threat — she claims to have proof that the burdened, child-like Miriam brutally murdered her father — and the way Annabel and Miriam react to this blackmail gradually reveals the history of their shared, complicated relationship.

Although its special effects are hardly delivered on a blockbuster scale (as befits the playwright’s efficient and understated style), Snake in the Grass is nonetheless a more technically demanding show than Circle Theatre usually tackles. During last Saturday’s preview matinee, all pistons were firing: The disembodied, bellowing voice of a dying old man cried out; furniture moved on its own; and lighting went from the menacing shadows thrown by lanterns to the sudden electrical flare-up of an unexpected outtage that traps the sisters in the nighttime garden. Sound designer David H.M. Lambert, lighting maestro John Leach (who’s been giving Circle’s shows their glow for 17 years now), and set designer Mark Evan Walker all play their parts unseen, but their gifts lend a real sense that the old bastard who ruled this estate still looms heavily over it. Stephen King once said that most horror stories come down to the theme of guilt, and Circle’s designers really reinforce the sense that these siblings have felt smothered by their father no matter what life choices they made.

Anyone who’s seen a version of Ira Levin’s classic Broadway thriller Deathtrap will not be terribly surprised by the second-act twist that Snake in the Grass offers. But the pleasure of Circle Theatre’s production is in the journey, not the destination. These women know how to play their calculations and deceptions with impressive timing and depth. As the embattled sisters, Lindsay and Scott Banks complement each other. Lindsay’s character desperately tries to hold on to her sanity while Scott Banks slowly, almost sensually sheds hers. As the extortionist nurse, Fairchild is impressive both as a wine-swilling taunter and (spoiler alert!) a limp body comically stuffed into a well. Despite its conventional structure, Snake in the Grass concludes with a few surprising moments when guilt, insanity, and the supernatural converge, an unsettling “Boo!” for the mature audiences to which Circle Theatre plays. -Jimmy Fowler