Sitting on the tiled floor of a former gas station on Montgomery Street on Fort Worth’s near West Side, Jake James is poring through a binder full of photos of glamorous women and their beautiful hair. 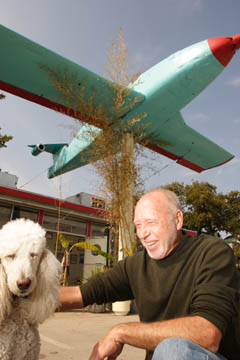 James, 68, is the winner of numerous international hairstyling competitions, and here he is in a tiny old remodeled station with one styling chair and dozens of trophies filling up shelves. As he rummages through the photos, James talks about his years of tending to the do’s of the elite Westsiders, working in many salons and even serving as “stylistic director” of the Fort Worth Neiman Marcus salon in the late 1970s. “It’s funny, because I have styled so many people’s hair here, but it was such a long time ago,” James says. “I’m getting so old now, I don’t remember the names, but I remember the faces.” Not more than 30 seconds later, a car pulls into his parking lot. Out pops a woman with a big smile on her face, looking for the guy who used to style her hair and her family’s hair. “When I heard you were coming back here, I was so excited,” Nancy Rockwell says. In years past she had gone to him no matter where he was working —the Razor’s Edge, Ridglea Hair Fashion, Neiman’s.

But it wasn’t Jake James’ name that first caught her attention. As for so many other drivers along Montgomery, it was the plane that made Rockwell put on the brakes. “When we saw that plane go up on that pole, everyone was wondering who was doing it,” she tells James. “When we found out it was you, it all made sense. You’ve always been a little different. A great hairstylist, but someone who is not the usual type.” It’s true — there’s not much “usual” about James’ business these days. He is doing curly-top hair extensions for debutantes, working out of a former Shamrock station. Country-club women are coming in to doll up for their weekend soirées. Pink plastic flamingos and metal palm trees decorate his parking lot. The two-month-old business is named “White Trash and Pink Lemonade Coiffure International.” And then there is the plane, turquoise and red, perched on a pole above his roof — an attention-getter that has drawn some less-than-friendly attention from his Arlington Heights neighbors.

“I just wanted to make people laugh,” James says of the plane. “I felt this was an arts and cultural district, and a plane flying over a hair salon would be something like that.” After that comes out of his mouth, James lets loose with a big laugh. When James first brought the plane — a 1960s-era Cessna he picked up in East Texas in the mid-1990s — to the property, one neighbor, David Berning, filed complaints with the city. The code compliance department investigated, and James was cited, he said, for “improperly storing things outside.” James was planning to move the plane to his home near Lake Worth, but he changed his mind. “I wasn’t going to put that plane on the pole until [Berning] gave me grief,” he said. Berning talked to news media at length about a year ago when the plane controversy first took off, but told Fort Worth Weekly that “I have said enough, and I am getting tired of this whole thing.” He did say that he thinks the plane is ugly and that James “thinks he is a man of honesty, but he is not, because he is always changing what he says he will do.”

Building codes can be complicated, and the hairdresser’s plane sort of dived through some cracks. James couldn’t store it in the parking lot, and it was too big to serve as a city-approved sign. He could put it up there unadorned as an addition to the building. But under the neighborhood’s commercial zoning rules, the plane was too high, so James had to cut 11 inches off the top of the plane’s cockpit and tail to make it legal. “It had to comply with height and setback requirements, but as long as it did not have commercial copy [signage], it was not considered a sign, and legally it fits within the code requirements,” said Dana Burghdoff, the city’s deputy director of planning. “At this point, the plane and the signage and the parking requirements fit in with neighborhood commercial zoning.” James found the controversy both funny and frustrating. “I’m just a poor boy who has worked in the world of French cuffs and expensive suits, with models on the runway, but at this point in my life, I found it more fun to be wearing my jeans and doing hairstyles in a gas station,” he said. “And I just think that plane is just a part of who I am. I’m not defined by what other people think of me.”

The longtime hairstylist was born in Amarillo in 1939 — “Smeltertown,” he called it — and he resisted going into his father’s used car business. Instead, when he was 18, he enrolled in a hairstyling school “because I noticed all sorts of women going in there, and I figured that might be a good reason to learn how to do hair.” In the 1960 and 1970s, he plied his craft in Fort Worth and developed a reputation as a somewhat wild guy, sort of a Texas version of the Warren Beatty character in the 1975 movie Shampoo. “In my younger years I worked hard, but we also played very hard too,” he said. It was around this time that James began taking his work more seriously, and he became known around the world by winning hairstyling competitions. In his new digs, the trophies attesting to his skill are everywhere. He has won the Rose D’or in Paris, the World Supreme Progressive in New York, and a world competition in Seoul, South Korea.

James moved to Tyler during the 1980s to get involved as an investor in the oil and gas business. He later worked in restoring old houses, all while keeping his lucrative hairstyling business going. At one point, he was trying to renovate an old movie theater and turn it into a salsa club. For some reason, he thought that the little airplane he’d found in Forney might be an attraction, hanging from the club’s high ceiling. The theater renovation fell through, but James kept the plane. When he moved back to Fort Worth two years ago with his wife of 25 years, Rose, he brought the plane along. While looking for a location to re-open his hairstyling business here, he came across the little gas station on Montgomery Street. With his usual flair for the unexpected, James had originally planned to combine his new salon with a taqueria, but the cost of bringing the building up to code for a restaurant was too high. The “pink lemonade” in the salon’s name is now its only connection to any restaurant business.

But James may have landed an investment almost as good as an oil well. The airplane hanger and hairdresser now owns land that one day probably will face a new rodeo arena, currently being pushed by the Bass family. James wouldn’t discuss what he paid for the property but said he has been offered three times that amount since he bought the gas station about two years ago. He’s not done fiddling with his salon. James said he is thinking of using the parking lot to sell sculptures and landscaping plants. He would need a zoning change for that, and he expects more fights. “If they didn’t like the plane, I doubt they would want sculptures and trees being sold out there,” he said. And what if the powers that be don’t want white trash and pink lemonade and a plane sitting outside their fancy new arena? “Well, I guess they’ll have to buy me out to get rid of me,” he said. “I love the work I do and have fun with it, but I also know a bit about business. And I didn’t know it at the time, but this little piece of property is on one of the hottest corners in the city.”

With that, James turned back to his work. The debutantes were due, and the old guard has rediscovered their favorite stylist. They seem fine with the place’s name and his poodle, Molly, wandering around and the ersatz palm trees. Most seem to have no problem with their hair being done in a gas station underneath an airplane — as long as Jake James is doing the ‘do.

You can reach Dan McGraw at dan.mcgraw@fwweekly.com.