It’s been 12 years since The American President, the last time Aaron Sorkin had his name on a produced movie DELETE. 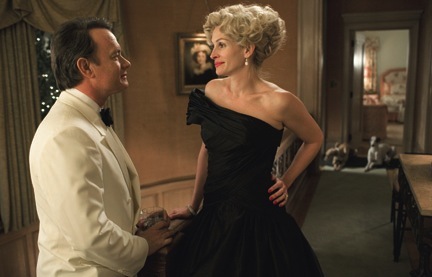 Yet since then, he’s assumed a profile in the entertainment industry that’s arguably higher than any mere screenwriter. That’s because he’s had a lifetime of a career as a TV show creator, starting with the uneven, fascinating, and short-lived late-1990s comedy Sports Night. Then came The West Wing, which got him talked up as a savior of network television, before 9/11 knocked the show off its moorings. He left the program, did a stint in rehab, and launched a comeback attempt with Studio 60 on the Sunset Strip, which began brightly and ended a few months later as one of the most reviled shows in recent memory.

Now he’s back on the big screen with Charlie Wilson’s War, a deluxe Hollywood drama that showcases Sorkin’s well-established flair for witty banter and concern for global events. The recent trouble with his writing has been striking a balance between those two qualities – on Studio 60, the banter was drowned out in tedious cultural talking points and petty settling of personal scores. Charlie Wilson’s War plays like the work of a writer who’s been chastened by the experience. That’s good, but Sorkin goes too far in the other direction and lets the jokes take too much precedence over the substance of his story.

The Charlie Wilson in the movie’s title was Texas’ member of Congress from the 2nd Congressional district (Nacogdoches, essentially) in the early 1980s. Fond of booze, cocaine, and strippers, Wilson nevertheless shrugged off his vices long enough to realize that the Soviet invasion of Afghanistan gave him a gilt-edged chance to strike a blow in the Cold War. Turning him on to the cause was right-wing Houston socialite and his sometime girlfriend Joanne Herring. Aided by a disenchanted CIA honcho, a motley crew of experts, and a congressional staff composed solely of beautiful young women (known around Capitol Hill as “Charlie’s Angels”), Wilson spearheaded a covert war effort, funneling Israeli weapons to the mujahedeen fighters so they could destroy Soviet tanks and planes.

Both Sorkin and director Mike Nichols are known for getting the best out of high-level acting talent, so it might seem odd that the A-listers here are off their game. Tom Hanks and Julia Roberts play Charlie and Joanne and don’t have much chemistry with each other. Had these two stars teamed up at any point in the 1990s, romantic comedy fans would have mobbed box offices across the nation. Now that they’ve waited this long to work together, it’s something of a consolation to note that they don’t really mix.

Neither of the stars are convincing as Texans either, though Roberts is much nearer the mark. However, that’s nowhere near as grievous as the miscasting of Hanks as a dissipated playboy type. An early scene places Charlie naked in a hot tub with three big-haired, big-breasted, equally naked women (two of whom are snorting coke) and a guy who’s trying to get him to invest in a TV show. The character’s supposed to be completely at ease in this situation, and Hanks instead looks as if somebody off camera is holding a gun on him. The supporting cast includes Enchanted’s Amy Adams as Charlie’s chief of staff and the great Indian actor Om Puri as Pakistan’s president Mohammed Zia, but neither of them is given enough good lines to make much of an impression. Philip Seymour Hoffman is given those lines, though, and he steals this picture clean away from the leads. Donning some hideous facial hair, he plays Gust Avrakotos, the CIA guy who was frozen out at the agency by his WASPy Ivy League colleagues and thus was handpicked by Wilson to be his right-hand man. Hoffman booms out his line readings (you often forget what a huge voice he has) as the coarse and mouthy Gust but doesn’t shortchange the character’s intelligence or his offhand wit.

The movie mostly plays as a breezy workplace comedy, and it’s amiable enough on that score. When it’s all over, though, it leaves you with the uneasy feeling that a big part of the story has been left unsaid. Wilson’s actions helped defeat the Communists (yay!), but they also helped create the Taliban (boo!). The filmmakers are aware of this bitter dramatic irony, yet they don’t seem to know what to do with it. Had Nichols and Sorkin shown less awareness and treated this project as a neat little spy yarn from a bygone era, they might have gotten away with it. Instead, they reach for some sort of relevance for today’s world, and their attempt falls miserably flat. Caught betwixt and between, Charlie Wilson’s War takes in a deep breath to make a grand statement and winds up saying nothing.