As mannered Britons dump garbage all over gallery floors under the auspices of creating “art,” and brash young Americans simply Xerox their favorite photos of celebrities onto canvases in a seemingly endless, relentless homage to Andy Warhol, many Fort Worth artists are still exploring wild and crazy psycho-sexual-aesthetic-social themes. 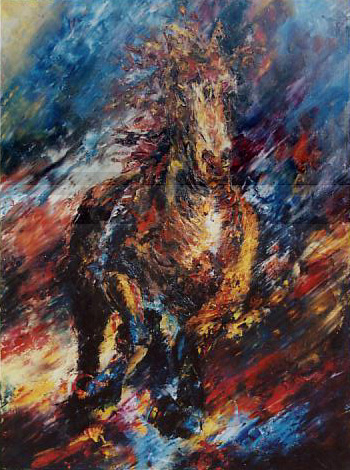 Like flowers.
And horses.
And cowboys.
Which is neither good nor bad, mind you. Just a fact. Albeit an illuminating one that, in its own perverted way, provides some crucial context. The larger art world’s noted practitioners have become drunk on The Push, the struggle to locate boundaries in a system wholly defined by its lack thereof. Contemporary startists set the agenda, and, dating all the way back to Warhol and, earlier, Duchamp and Monet, they have submitted to the intoxicating force of a desperate, potentially dooming search for a yin to their yang, some sort of Other to make them feel whole or like they matter. Today’s fear, echoing throughout gallery walls and artists’ consciences – and growing louder as we speak – is that when everything becomes art, nothing will be.

Except, well, representational or traditional art, which will always be considered Art-with-a-capital-“A,” whether it’s done well or not. And on rare occasions, it’s done poorly and ends up in museums or done wonderfully and hangs in coffee shops, raising the question: Is the only thing that determines whether traditional, representational art is considered “high” or “low” is the artist’s resumé or gallery where he or she is showing? Soon Y Warren’s thick, painterly abstractions, for example, wouldn’t look out of place at the Modern Art Museum of Fort Worth. But since the local artist is obviously more concerned with presenting non-offensive imagery to her viewers than with proving something to them, she exhibits in mainstream, family-friendly exhibition spaces, including the Fort Worth Community Arts Center, where some of her work will hang until the end of January, alongside work from dozens of other artists toiling in the high-low rift.

There are moments at the FWCAC – or in local flower shops, antique stores, and other places where kitsch rules – when the conscientious viewer is liable to be stilled by an intense and singular connection, a realization of the limitlessness of art and, more generally speaking, of human possibility. That the connection may be augmented by the mostly mediocre context, like a diamond in the proverbial rough, is beside the point. The “low” part of the equation teems with unassailable talent. Like Warren, mixed-media sculptor Kim Lovelace also is exhibiting at the FWCAC and also transcends any broad label that you’d be crazy enough to give her. Lovelace’s lyrical cocoons are delicate but boldly inert. Thin, swirling skeletons of grapevine draped with sausage casing, some have the stoic, dejected look of an old shoe or helmet. Others are lyrical, their fluid lines separating and joining at various, calculated intervals, as if the fragile, three-dimensional impressions of giant butterflies in flight have been captured and haphazardly melded together.

Whereas Lovelace is sui generis, Warren is an accidental trickster who stops occasionally to adjust our somewhat skewered delight in kitsch. “Thunder” is a whirlpool of deep browns, maroons, and blacks, with glimmering bolts of gold and blue, beneath which rumbles – toward the viewer – the frayed or fraying silhouette of a galloping stallion. The frenetic impasto bubbles and glistens like a mini-relief map of craggy terrain rendered in melting crayons. Throughout the FWCAC’s maze of galleries, the clunkers tend to overshadow the gems. But your patience will be rewarded. Just as it will when you’re hunting antiques. Or flower shopping. – Anthony Mariani

Sun Sets on Sundance
By now you’ve probably heard the news that AMC Sundance has seen its last days as a movie theater. The downtown Fort Worth venue closed its doors on Jan. 6, with signs posted on those doors stating that the place will re-open in the fall as a Norris Conference Centers facility. The mini-chain has similar businesses in Austin, Houston, and San Antonio, and they’ve already indicated that they intend to make only minimal changes to the theater’s exterior (removing the marquee and the box office) so as not to alter the distinctive Art Deco look of Houston Street.

Local moviegoers will remember the Sundance as a venue for the old Fort Worth Film Festival, as well as the recent Lone Star International Film Festival. It also occasionally hosted Q Cinema’s screenings, plus an art film series called Gourmet Cinema (1998 to 2001). The theater was rumored to be haunted, too, though as a film critic who logged countless screenings there at all hours of night (occasionally in auditoriums where I was the only customer), the scariest stuff I ever saw were the bad thrillers and romantic comedies that had found their way to the screen. In the past year or so, management treated the place like a second-rate property, letting carpets go uncleaned and showing films with poor-quality projection and sound (compared with other AMC theaters as well as theaters run by other chains).

New movies would generally open at the relatively well-kept AMC Palace, while the Sundance wouldn’t get them until they’d been out for a couple of weeks. It may seem a blessing that the old theater has been put out of its misery, but now the moviegoing options in downtown Fort Worth are severely reduced, with a paltry nine screens left to entertain the crowds in this bustling area. The Kansas City-based AMC has made some vague noises about “improving” the Palace, but what that means we’ll have to wait to find out. In the meantime, movie fans may discover that they have to go to the Hulen Street theaters or the spiffy Rave Ridgmar to find their favorite films. If there’s any cause for mourning the passing of the Sundance, it’s not for what the theater was, but for the void it leaves behind.  – Kristian Lin