Home News Metro Tree Fight Resprouts
SHARE
Facebook
Twitter
When trees along the Trinity River across from Colonial Country Club fell to gas drillers’ saws last month, many who had fought to save the grove intact thought the battle was over. 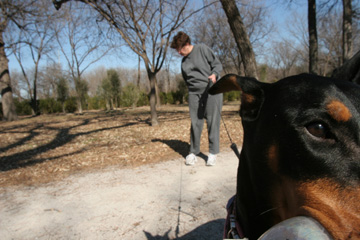 Chesapeake Energy had the necessary permits and city backing, and the company is moving forward. But a lawsuit filed against the city by Fort Worth resident Melissa Kohout has given a bit of hope to those who oppose urban drilling near parkland and residential areas and who want to see problems in the city’s gas well permit process exposed. Kohout alleges that the city violated its own ordinance by failing to hold public hearings and notify residents properly that the Chesapeake drilling site near the Trinity River trails fell in the “high-impact” category.

Wells are considered to be high impact if they are within 600 feet of a public park. Chesapeake owns the eight-acre “Pearson” site on the river near University Drive. The site is within 200 feet of the Trinity Trails, and the company needed waivers from the city and property owners to get the permit. Kohout claims that the city held no hearings because officials anticipated heavy opposition from citizens. “If we had known this was a high- impact well from the beginning, it would have changed how we approached this,” said Kohout, who is not asking for monetary damages. “The debate was huge, and we just wanted the opportunity to go before city council. The city just kept saying it was out of their hands entirely, but that was not the case. Chesapeake Energy had the opportunity to present their case, and the citizens of Fort Worth did not.”

Kohout’s case will have its first hearing Feb. 22 in state district court to determine if she has legal standing to sue, meaning Judge Bob McGrath will rule if Kohout was harmed by not being properly notified. Attorney Jason Smith, who took the case pro bono, said the city’s handling of the permit process “violated her constitutional rights.” If the judge rules Fort Worth failed to follow its own ordinance, Chesapeake could reapply for a permit – and the trees are gone in any case, though the company did minimize the clearing, especially on the property nearest the river trail. But some see the case’s timing as critical: A new task force will begin next month to consider possible changes to the gas drilling ordinance. The purpose is to look closely at drilling in urban neighborhoods and its effect on parks and residents.

The current ordinance requires a 600-foot setback between wells and parkland, but a waiver can be requested. The city council can grant the waiver after a public hearing, or it can be granted without a hearing if all the property owners within 600 feet agree to it. In the first case, notices must be published 10 days before the hearing; in both cases, signs must be posted near the property to indicate that a permit for a “high-impact” well is being considered. Chesapeake chose to take the no-hearing route. Landowners, including Colonial Country Club, agreed to the waiver, as did the Tarrant Regional Water District, which had 40 acres involved in the lease. The water district will receive a bonus of $586,165, plus 27.6 percent royalties once the wells begin producing.

Smith said the suit may hinge on the court’s ruling on whether the city is one of the property owners. “We believe the city … by going through the property owner waiver process, missed one property owner,” he said. “They did not get a waiver from themselves.” Smith said Fort Worth owns the trails, as shown by a 1995 affidavit by then-city parks director Richard Zavala. The city was fighting to prevent a topless bar from opening within 1,000 feet of the trail system, and Zavala testified that the city “owns and/or maintains approximately 15.5 miles of hard-surface paths along the Trinity River and its tributaries.” When Chesapeake began the permitting process in August, city staffers decided the site didn’t qualify as high impact because the trails were owned by the water district, not the city. But the gas drilling ordinance defines “public park” as “any land area dedicated to and/or maintained by the city for traditional parklike recreational purposes.” City workers maintain the trails.

Last September, five citizens spoke to the council at length, asking that the permit for the trailside well site be re-evaluated. After their presentation, Mayor Mike Moncrief thanked the crowd but cautioned that zoning for the land in question would allow a “concrete batch plant” or “some kind of manufacturing company.” The only way trail users would be aware of the drilling site would be “if you are in [a] helicopter,” he told them. After a letter from Kohout to the city on Sept. 26 warning of safety issues for trail users, the permit was reclassified as “high impact.” But still, no public notices or signs were posted. The permit was granted on Oct. 14.

In e-mails obtained by Fort Worth Weekly, city officials appeared to be trying to minimize public input on the issue. David Lunsford, who supervises gas well inspections for the city, wrote on Oct. 2 to other city employees involved in the permit process that “The rule is ‘No Comment’ to anyone about the well north of Colonial and accept no paper work (like a petition) from anyone.” In a letter to Smith on Oct. 17, City Attorney Sarah Fullenwider wrote that “the City received your client’s objections and safety concerns about this the location of this gas well prior to the reclassification to a high-impact well.” She wrote that, because of the water district’s waiver, “no public hearing before council was required.”

Kohout sees things a bit differently: “We did not know about the reclassification of the permit until it was a done deal, and if we had, we would have gone before the water district board and city council in large numbers to make our point.”
Fort Worth spokeswoman Cecilia Jacobs said city officials would not comment on Kohout’s allegations. Smith said the size of the protest mounted in January 2006 over a proposal to put a road through Trinity Park is indicative of citizens’ interest in park issues. The council received hundreds of e-mails, heard from dozens of citizens at a meeting, and, as a result, put the parkway on hold. “The Trinity Trees group had about 1,200 citizens sign a petition, and hundreds came down to the park for a rally on Labor Day,” Smith said. “I know we would have had a large group come down for a public hearing had the city wanted to include the public in the process. Chesapeake had their opportunity to present their side, and Melissa just wanted the same opportunity.”

Chesapeake Energy officials would not say how soon drilling at the site will start, but Julie Wilson, Chesapeake’s vice president of corporate development, told the city council last fall that drilling would not begin for 12 months. Don Young, who has fought for tougher laws on gas drilling throughout the city, said he hopes the lawsuit “will shed some light on how this permit process is being handled by the city. There was a bunch of backroom stuff that went on here, and the laws need testing. It’s almost like Chesapeake was a part of the city government, and the citizens were not.” Young said if the process were more open, the opposition group would have had the opportunity to make its case that the drilling pad site could have been done at the Union Pacific railyards next door and not so close to the park property. For Kohout, the lawsuit is as much about safety as the city’s handling of citizen notification. She walks regularly on the trails with her dog, Barbie, and worries about being only 200 feet from a gas well. “We will not be protected by a little fence around the wells,” she said. “Two hundred feet is not enough when we are dealing with something of this magnitude.”