I love to see musicians squirm,” David Matsler said, beaming his best shit-eating grin over a half-finished glass of whiskey. 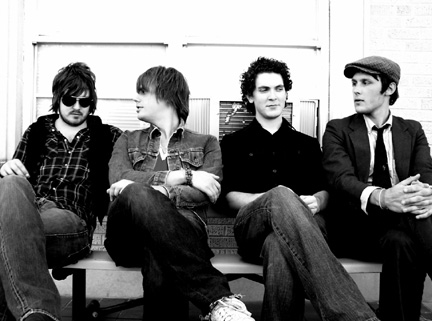 His sentiment is a lot deeper than – and not as sinister as – it sounds. What he’s referring to is the brilliance that can materialize when musicians are forced to play rather than think, hoping to achieve the musical grace that comes only from spontaneous improvisation. As The Black Bonnets, Matsler and his bandmates may be one of Cowtown’s most technically proficient but underappreciated young bands.

The band began to come together when friends Matsler and bassist Scott Edgar Lee Jr., who had been jamming for a while, decided they wanted to be part of a full-blown outfit. The band went through a few early versions. Lee said most of them felt OK, and songs were brewing, but nothing clicked until drummer Nate Koon and lead guitarist Austin Morgan came on board. Koon had been playing as a hired gun. After wrapping up a long tour with singer-songwriter Scott Hall, Koon came home to the Fort road-weary and looking for a group that welcomed his personal musical contributions. “From the first few rehearsals … I felt like I had maybe found something real,” he said.

Around the time when the band began forging ahead and playing out, guitarist Morgan came along. Like Koon, he was a hired gun looking for something he could devote himself to. “I just told him he could do a better job than whoever we had at the time, and he shouldn’t over-think it,” Lee said. Morgan joined without much hesitation, and the four guys felt an immediate connection. “We all liked a lot of the same music, but, interestingly, all came from a slightly different approach and focus,” Matsler said. Though he often generates the ideas, he swears the magic doesn’t happen until all four musicians are in the room together pushing a song ahead. Incorporating bits of The Band, Petty, Dylan, Creedence Clearwater Revival, and contemporary hard-Americana purveyors like Wilco and Whiskeytown, The Black Bonnets somehow manage to summon the greats without ripping them off.

Though only 22, Lee is the brightest-eyed and most eager of the bunch, but you can tell that he’s also sort of the father figure, who commands respect. And he has the bass chops to back it up – he’s been hand-picked by Kevin Aldridge to play in a new version of Chatterton, the veteran singer-songwriter’s on-again-off-again project. Guitarist Morgan also has local scene connections via his younger brother Chance Morgan, who co-fronts the Gang of Four-esque local giants The Burning Hotels. Morgan “has, almost overnight, gained a reputation as one of the best guitar players in town,” said Kenny Hollingsworth, guitarist for The Lifters and Malt Country. “He is just so damn good.”

At 26, drummer Koon is the eldest Bonnet and perhaps the most gregarious and easygoing. “I’m just really happy to be playing music that I personally love,” he said, “and that other people seem to enjoy and maybe even kinda dance to, also.”
The band recently put the finishing touches on its debut disc, laid down at friend Mat Bishop’s home studio in Saginaw. The Two Black Ribbons EP is chock- full of what Matsler calls rock ‘n’ roll “authenticity”: fiery blues and slide riffage and pumping and thundering rhythms, all raved up by Matsler’s whiskey-and-nicotine-drenched wailings. With pretty deep lyrics, courtesy of Matsler, all five tracks have an incredible sense of immediacy and never come across as forced or too much like retreads. “Gun Barrel City” opens the disc in a rip-roaring tempo, with killer guitar licks and a hook so catchy it’s hard to believe the song is an original. “Hard Luck Mama” is a classic country-blues shuffle complete with slide guitar and aching vocal harmonies. “Baby” finds the band treading more contemporary alt-country territory, but no one would confuse it with a Ryan Adams cover. And like the good showmen they are, the Bonnets close the EP with arguably their best tune, “Coming Home,” a song with brash and biting vocals, ferocious guitar leads, and a truly destructive rhythm stomp that just barely keep the chaos at bay.

The recording is a great representation of the band’s drive but still not a conceivable substitute for their live performances. With the EP set to release this spring and a slew of high-profile gigs coming up, The Black Bonnets already seem to be in full bloom. l

Editor’s note: The author is a part-time employee at The Moon Bar.