Home Film Film Reviews Hidden Gold
SHARE
Facebook
Twitter
The Oscar nominations came out this week, and for once the talk about who got the nods might actually be overshadowed by speculation about whether the writers’ strike will derail the show. 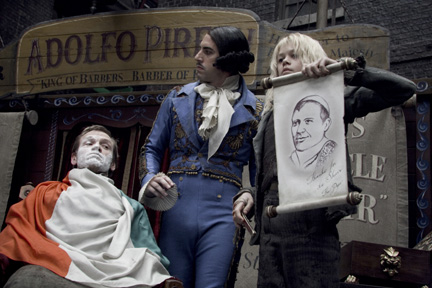 Since the major categories (acting, writing, directing, and Best Picture) will be analyzed to death over the next few weeks by everyone else, let’s focus on the less-heralded nominations. It’s my way of recognizing movie people who did astonishing work behind the camera in 2007. It’s also my way of helping you with your Oscar pool, and if it doesn’t, I’ll give you a full refund. (Editor’s note: There is no implied contract here. Save your breath.)

Cinematography: None of the five nominees were on my personal list of the year’s best cinematography jobs, though I find four of the choices defensible. (The bad pick is Seamus McGarvey’s undistinguished work on Atonement. Don’t be surprised, though, by the nomination of The Assassination of Jesse James by the Coward Robert Ford, a dull Western that’s nevertheless beautifully photographed by Roger Deakins.) The top contenders figure to be No Country for Old Men and There Will Be Blood, two sun-drenched nightmares shot near Marfa by Deakins and Robert Elswit, respectively. Which movies did I think were better photographed? Sunshine (Alwin Küchler) and 300 (Larry Fong) for starters, though maybe voters figured they were too heavy on special effects. The same can’t be said for Robert Yeoman’s take on India in The Darjeeling Limited or Ed Lachman’s evocation of ’60s film styles in I’m Not There. None of those were as stone gorgeous as the riotously colorful Thai musical Western Tears of the Black Tiger, too obscure to hope for an Oscar nod but still the most eye-popping film of ’07.

Art direction: I’m pulling for Dennis Gassner and Anna Pinnock in The Golden Compass here, because that was the only movie all year that made me think, “Wow! These are great sets!” This year’s picks are padded out by the solid, unexciting historical re-creations in American Gangster, Atonement, and There Will Be Blood. Sweeney Todd was also technically a period piece, but Dante Ferretti and Francesca Lo Schiavo were free to create a fantasy world, and if anyone has a chance to vanquish The Golden Compass, it’s probably them. The great overlooked piece of set design this year was 1408, in which Andrew Laws wrought incredible variations on the single dowdy suite of hotel rooms to which the action was largely confined.

Costume design: As always, period pieces dominate this one. Elizabeth: The Golden Age and La Vie en Rose aren’t up to the standard of the other three nominated films. On the other hand, Albert Wolsky’s ’60s costumes for Across the Universe merit a hard look, no matter what you think of the rest of the movie. Still, the race will probably come down to either Atonement or Sweeney Todd – Colleen Atwood deserved her nod for the latter just for Sacha Baron Cohen’s blue outfit, which gets a laugh all on its own. I would’ve liked to see Debra McGuire recognized for the array of comic historical looks she brought to Walk Hard or Milena Canonero’s America-meets-India job on The Darjeeling Limited. April Ferry’s clothes for Southland Tales would have been a nice contemporary choice for the category, too.

Foreign film: I haven’t seen any of the nominated films. (Not unusual, by the way, since they seldom get screened in North Texas.) I’m only stopping here to observe how screwed-up this category is. Even the head of the academy’s nominating committee blasted the voting process for leaving out Cristian Mungiu’s 4 Months, 3 Weeks, and 2 Days. That movie’s out in Dallas next month. See it any way you can. Documentary feature: Either Charles Ferguson’s damning No End in Sight or Michael Moore’s light-hearted Sicko will deservedly win this one, and political winds in the next few weeks might have something to do with swaying the voters toward one or the other. Social consciousness is all well and good, but Seth Gordon’s The King of Kong should have gotten a nod for squeezing so much human drama out of a video game controversy.

Original score: Jonny Greenwood’s score for There Will Be Blood was left out on a technicality, which is a shame. The voters win a few points for picking Michael Giacchino’s score for Ratatouille, a film that wouldn’t leap to mind as a contender in this category. The best work here is Dario Marianelli’s spiky, modernistic score for Atonement, a worthy frontrunner. Still, better musical selections for Oscar night would have included Stephen Trask’s cool classical piano stylings for The Savages, Klaus Badelt’s heroic music for Rescue Dawn, and even David Arnold’s dark, deadpan work for Hot Fuzz.

Original song: I liked Enchanted, but honestly, three songs nominated? If there is an Oscar show, Amy Adams will be ready to drop after singing them all. Just like what happened last year with Dreamgirls, Enchanted’s three numbers will split the vote. That means the Oscar falls to Glen Hansard and Markéta Irglová’s graceful and impassioned “Falling Slowly” from Once, which deserves to win anyway. Any Oscar show will sorely miss one of the funny, period-flavored songs from Walk Hard or Adam Schlesinger’s ebullient “Way Back Into Love” from Music and Lyrics.