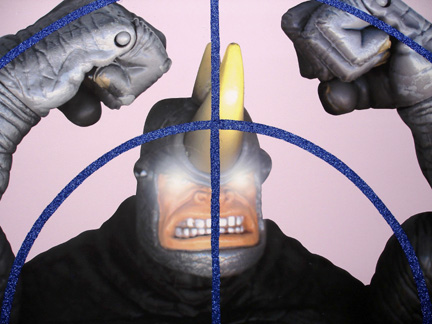 But the 28-year-old underground institution recently opened The Cirkit of Mythos: SYNAPTIC SNAP!, a show of liberal agitprop by four locals that has spent the past year gallery-hopping and, in that time, devolving and evolving. After stops at two North Texas university galleries and one commercial space, the handiwork of Omar Hernandez, Greg Mansur, Eddy Rawlinson, and Jason Reynaga is a good excuse to visit the newly remodeled hot spot. Nothing says, “Not your father’s Artspace 111!” like the radical chic propaganda of Cirkit of Mythos.

For one thing, few of the pieces have that hallmark Artspace-111 attribute: marketability. For another, none of the other respectable galleries in town, not even the rather adventurous William Campbell Contemporary Art, is crazy or brazen enough to host Cirkit of Mythos. Some of the work is downright offensive – not to political correctness, naturally, or even to excellent pictorial taste, but to our conservative friends and neighbors.

Like a frothing political columnist, Rawlinson isn’t afraid to quote sources out of context. He doesn’t render his drawings as much as he compiles them, bit by excruciating bit, using familiar, loaded imagery, including newspaper clippings and reproductions of archival photos. Hitler and the SS, human skulls, soldiers, war machines, and other weighty symbols, including Grünewald’s “The Crucifixion” and Giambologna’s “The Rape of a Sabine,” clamor for the viewer’s attention. Laid out in linear patterns and often marked up by Rawlinson, the blunt arrangements are submerged in angry, shallow swaths of bold colors. Reds, blues, and greens bleed down the page, as if Rawlinson had carved into it, swashbuckler-style, with his paintbrush.

Imposing as his weapon of choice may be, though, it is not mightier than the pen. His readily recognizable shapes and figures rarely add up to anything deep or profound. I got the feeling that he just wanted to scrawl, “Wake up, you idiots!” or “The current U.S. presidential administration is like Nazi Germany!” on the walls. With menacing, punk names like “Fascism’s Wet Dream,” “C. American Dead,” and “Gotterdammerung (The Devil’s Arcade),” Rawlinson’s spectacles (most are priced at The Number of the Beast, $666) linger in the head like catchy jingles or sexy shampoo ads: You may find that you’ve become more intimate with their superficial qualities than their meanings – heavily implied, over your head, or otherwise.

What then to make of a piece that hinges on its label? What then to make of the oeuvre of Mansur, whose elaborate satires and hoaxes could be seen simply as illustrated postmodern critiques? Represented here by a bi-headed sculpture and several inkjet prints, Mansur is a true 21st-century guerilla artist, a wily cyborg shaman undaunted by any medium, style, or material, including the English language. Perhaps he understands that verbiage lets an artist guide, even if only slightly, the viewer’s attention.

Mansur’s main concern has always been the corporatization of identity. Like Rawlinson, Mansur also is involved in academia – he teaches in the art department at Texas Christian University. And like Rawlinson to a degree, Mansur lets people bring their own prejudices to his work. But where the men differ is in the telling. Rawlinson bombards viewers; Mansur allures them, often convincingly. Juxtaposing weird photos with famous quotes from Shakespeare, most of his prints here come off like warped inspirational posters. “I know not seem” scrolls across the bottom of a naked dude with a paunch, sitting on a lofty crag. “Tis a tale told by an idiot … signifying nothing” is pitted against two photos stacked one on top of the other; one is a sepia-toned action shot of farmhands wrestling an unidentifiable animal to the ground, and the other is a portrait of a person whose head has been cropped off, sitting on a patch of grass, wearing faded blue jeans and Old Glory on a navy sweater, and fondling slimy animal intestines piled high in a shiny metal bucket between his or her legs. “Thus conscious [sic] makes cowards of us all” is backdropped by a shore littered with industrial waste that opens up to a gorgeous body of blue water dotted by immaculate white ice floes.

The only print that may trigger a start of pleasant alarm is “Commodified Happiness,” a stock photo of an attractive fortyish woman with a curly blonde mullet, smiling at the viewer and embracing a smartly dressed man whose his head is turned the other way – the photo is in the shape of a bar code. Mansur’s sculpture – two long, tall, adult female mannequins – is just as witty and winning. One of the gals strikes a come-hither pose. Sporting black slingback heels, black stockings, knee-length black skirt and top, and a black Islamic-looking head-covering, she sits with one leg raised on a chair. On a small screen dug neatly into her forehead flashes video footage of sassy models sashaying down catwalks. The piece also includes an audio recording of a woman explaining away – in an annoyingly earnest, This American Life-y, confessional tone – her fetish for Islamic headwear.

The other mannequin teeters on heeled sandals nearby. Her ensemble – mini-skirt, top, and head-covering – is all pink. Neither fake female is patently ridiculous, or at least as ridiculous as the subtext they shrewdly advertise, in stereo: the possibility of Westernizing the Middle East. (Don’t discount pop-culture’s pluses, though. Eastern Bloc kids’ lust for blue jeans helped bring down the Berlin Wall, right? So maybe viral videos of empowered female performers will inspire oppressed young women in Third World countries to begin exerting their inalienable right to, um, bear charms. Maybe?)
A few years ago, Mansur pulled off an impressive culture-jam. He (legally) hijacked space on 20 billboards across North Texas and covered them with one of his cryptic photo illustrations. A two-part design, it consisted of a portrait of a John Ashcroft-looking guy next to the statement “Your identity is my idea” and another of an attractive young woman next to “My identity is your idea.” Instead of pushing a product on viewers, Mansur was thrusting an interrogation light into their psyches. I wished the stunt had been more absurdist, but I’d still like to see what Mansur could do with an entire neighborhood. Or city.

Most of Hernandez’ entries here are huge funky postcards from yesteryear, featuring simple, loud found images: graphic illustrations of a sparkplug, baby teether, St. Andrew’s Cross, and checkered flag; archival photos of a Stingray racer and early American fighter jets; and mechanical copies of $100 and $20 bills. After enlarging the small objects to impossible dimensions and shrinking the big’uns, he applied them to his “canvases” of lacquered wood, being sure to leave space for the gorgeous, amber lumber to come through. Beams of color zooming outward in all directions backdrop some of the central images, giving them a sense of ka-pow! By placing everyday objects in such prime creative real estate, Hernandez imbues them with symbolic might, showing that in art, as in life, context rules.

Like Hernandez, an art teacher at El Centro, Reynaga is a charmer, a veritable spy in the house of cultural vapidity. The art department chair at Dallas’ Wade College, Reynaga employs a lot of pop-cult references here, but to say that he’s derivative or that his references are gratuitous would be blatantly dishonest. They play supporting roles – and willingly. From a distance, “All Puffed Up!” looks like just a pink, rampaging Incredible Hulk outlined in black on a shiny pink background. But up close, the piece dissolves into a relief map of a hilly countryside idyll, its mounds given shape by furry pink balls and its meandering black lines and glistening pink spaces forming gentle rivers and shores. Likewise, “So FUCKED!” is simply a purple, silhouetted headshot of Barack Obama, pixelated almost to the point of incomprehensibility, on a reflective pinkish-orange background, with the presidential candidate’s scattering visage framed by a rifle scope. From less than five feet away, though, the montage ripples and pulses like playfully abstract schema.

Whatever their intent, Reynaga’s pieces function as portals into hyper-realities. By letting us peek into his inner imaginative life, he effectively admits that he’s a child of his generation, a byproduct of the bleeping, blooping, zipping, zapping consumer culture with which he, Hernandez, Mansur, and Rawlinson are equally fed up and in love. Their thoughts and emotions are real, even if only as flitting cybernetic facades.-Anthony Mariani