Home News Metro Downwind of a Windfall
SHARE
Facebook
Twitter
Generally speaking, when small environmental groups take on gigantic corporations, it usually doesn’t end well for the little guy – or the environment, for that matter. 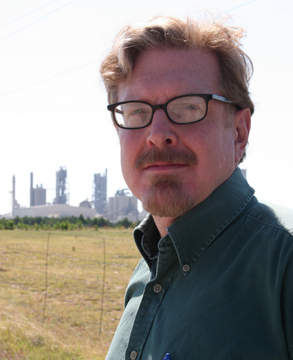 But in 1998, in the middle of a pitched battle with Texas Industries over the burning of hazardous wastes in cement plants near Midlothian, the Downwinders At Risk environmental group set in motion a series of events that would result in an unprecedented opportunity to clean up the air in North Texas. While the Downwinders were busy battling TXI, Holcim Ltd, one of the world’s biggest suppliers of cement, filed an application with the state to double the output of its Midlothian plant. The company also promised to add equipment that would cut the pollution in half. Seeing as the Downwinders were already busy fighting one cement giant, most people within the organization were willing to take Holcim at its word.

One person remained skeptical. Sue Pope, founder of the Downwinders group, contested the Holcim application with state regulators. She petitioned the Texas Commission on Environmental Quality but was denied a public hearing. As it turns out, her intuition was correct. Because of various problems with vendors and some of the equipment Holcim inherited, the company ended up putting more pollution into North Texas’ air than its permits allowed, particularly nitrous oxide (NOX), one of the major contributors to greenhouse gases that harm the planet’s ozone layer. Downwinders eventually sued, and in 2002, the Swiss-based cement company invited Pope to the negotiating table. After some coercion by the EPA, the skeptical Midlothian rancher agreed.

“I studied the proposal, and I just didn’t think it was possible,” said Pope, a soft-spoken 67-year-old who said that she became active in environmental issues in the late 1980s because she started seeing a marked difference in her livestock and the landscape after the cement plants started operating. “The state neglected to look at it adequately. They [Holcim] operated for quite some time in violation of their permit.”

Three years later, the two sides agreed on a settlement that somehow managed both to make the environmentalists happy and to cast a pretty positive light on a big ol’ corporation. Among its effects, the far-reaching agreement resulted in Holcim installing a type of pollution control that had never been used in Midlothian before. Called Selective Non Catalytic Reduction (SNCR), it has cut pollution at that plant by 40 to 50 percent, Holcim agreed to pay for an independent scientist of Downwinders’ choosing – SMU’s Al Armandariz – to monitor its activities. And in perhaps the most surprising part of the settlement, Holcim gave the environmentalists a $2.25 million fund to be passed out as seed money for other local anti-pollution measures intended to reduce the level of NOX poison in our air, one of the reasons that North Texas is in violation of the federal Clean Air Act.

“There are some adjustments that remain to be made, but I’m very appreciative of the progress we’ve made [with Holcim],” Pope said. This is the [culmination] of all of our work since the ’80s.” Now, united under the Blue Skies Alliance banner that includes the Downwinders, the Sierra Club, and other prominent environmental groups, the clean-air activists are in the unfamiliar position of sitting atop a giant pile of money, which they call the Sue Pope North Texas Pollution Reduction Program, with numerous different organizations all vying for a chunk of it. “For a group like us that exists on garage-sale money and very nice individuals who like what we’re doing, to end up with $2.25 million is a very big deal,” said Jim Schermbeck of Downwinders. “We want to make sure that we use the money responsibly.”

The group considered 39 applications – $11 million worth of proposals – and chose six (including one in Fort Worth) that will address everything from pollution by taxis, trolleys, lawn mowers, and school buses to promoting “green” building design. The initiatives include:

• a green building initiative to make possible more energy-efficient construction of lower- to middle-income homes in one Dallas neighborhood;
• creation of a local Sustainable Community Institute to promote environmentally responsible design and construction in North Texas; 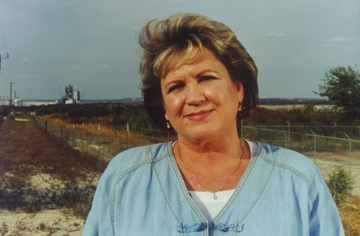 “The truly phenomenal part of this story is that these guys [Holcim and Blue Skies] have often been adversaries,” said Katie Hubener, former executive director of the Blue Skies Alliance. “We still want them to clean up and get greener, but this settlement is the only one of its kind in this country where environmentalists and industry sat down at the table, had a frank conversation, and were able to reach an agreement on how to clean up the air.” Hubener and Schermbeck said that the decision-making process was lengthy and tough, but ultimately, the deciding factor was lasting impact. Each program will receive seed money only, not annual funding. The hybrid taxi program, initiated by D/FW Airport and the City of Dallas, involves paying the cost of modifying gas-powered taxicabs to turn them into hybrids, running on a combination of gasoline and electricity. Blue Skies also wants the airport board to adopt a policy that would give hybrids preference in taxi lines. A Dallas ordinance already limits how long taxis can be on the road (two years or 250,000 miles), and Blue Skies is trying to get those numbers raised for hybrids. Dallas Sustainable Skylines is a green home-building project in the Fair Park area initiated by the city and Habitat for Humanity. The Blue Sky Alliance will pay for additional planning and features needed to qualify the homes for LEED (Leadership in Energy and Environmental Design) certification, which ensures that a building project is environmentally responsible. Holcim has offered to contribute cement to the project.

The Sustainable Community Project is a collaborative effort of Cedar County College and the Dallas County Community College to establish a program that educates builders, designers, and anyone who is interested in LEED certification and other green development practices, including how to transport materials, plan projects, and initiate environmentally friendly revitalization projects in neighborhoods. Fort Worth and Dallas teamed up to create the Mow Down Air Pollution Project, which involves trading in gas-powered mowers for electric ones. Experts estimate that the pollution created by using a gas-powered lawnmower for one hour is the equivalent of a 100-mile car ride. Hubener said the McKinney Avenue trolleys were included in the awards because if air conditioning and other upgrades can attract more riders in the summer, the impact on vehicle traffic could be significant. The Sue Pope money will pay to retrofit the entire fleet of historic trolleys.

Also on the list is a plan that would provide one hybrid school bus to the Midlothian school district. The project was chosen so that the Downwinders could create an impact in their own backyards, Hubener said. The school bus isn’t the only way that the Midlothian school district will benefit from the Sue Pope fund: The money has been sitting in an escrow account for about a year and a half, and all of the interest accrued will go to the district’s special needs fund.  Those grants will leave about $1.5 million still in the coffers, and Schermbeck said his organization will try to use that money over the coming year to do more in Tarrant County. “There is going to be an attempt to reach out to Fort Worth and Tarrant County,” he said. “The city of Dallas was just very, very aggressive in their pursuit of this money, so the result is that a lot of the money is going into grants that came through the City of Dallas. We’re trying to get Tarrant and Fort Worth more interested in applying for the second round of funding. We’re also meeting up with local foundations, even if they haven’t considered anything like this before, just to see if there might be a way to partner up and bring some of these projects to Tarrant for the first time.”

David Bary, spokesman for the regional office of the Environmental Protection Agency, said the historic agreement is a positive step toward cleaner air. “The result will be steps and strategies that will ultimately improve the air quality here in the Dallas-Fort Worth area and will result in improved health for everyone who lives here,” he said.