Home Music Music Feature Slowly But Surely
SHARE
Facebook
Twitter
Here’s a timeless image of a twentysomething bassist in a new band: Coby Queen answers his cell phone for a 1 p.m. interview, then asks for a few minutes’ reprieve. 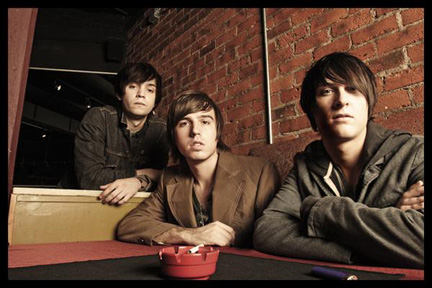 He needs to wake up a little more, pull some jeans on, grab a pack of smokes, and then he’s ready to talk about the band. “I think this is the longest phone conversation I’ve ever had in my life,” he said midway through the half-hour-long interview. “I’m not much of a talker,” he said. “I love to play bass, though.” For the past six months, Queen has been bassist for the raucous indie-rock and/or Stooges-ish punk trio Vincent. Take your pick of labels – Queen won’t complain. He said they both apply, although “indie-rock is the label every loud band picks,” he said. “You hear it all the time – it sort of makes you want to throw up.” He thinks “punk” stands out a little more.

And it’s really not a frivolous deDELETEion: Fort Worth natives Queen and drummer Cory Harvard, along with vocalist/guitarist Matthew Tichy, attack their instruments at a fast, frenzied clip, layering their sonic stampede beneath Tichy’s lyrics about disappointed love, betrayed love, suspicious love, and all manner of heartbreak in between: “I know, I know you’re lying through your teeth / When you tell me you still love me,” Tichy insists in his insouciant double-tracked vocals on an unmixed version of “Francois,” one of the band’s several new compositions. Harvard and Queen’s penchant for changing time signatures two or three times during a song keeps Vincent’s live performances careening nonstop around dramatic hairpin turns.

Unlike many young musos, Queen claims not to have harbored a burning desire since childhood to be a musician. After graduating from high school, he moved to Austin with some friends for “a change of scenery.” The much-vaunted music scene there didn’t terribly thrill him. “It’s a nice city to visit,” he said. “But I decided I didn’t want to live there.” He returned to Fort Worth a couple of years ago, and he had barely unpacked his suitcase when the Hotels asked him to join as their bassist, even though Queen had never played the instrument before. He taught himself and helped the Hotels get launched. He left about a year later, and almost as soon as he checked out of the Hotels, another stellar local rock outfit, The Red Herrings, recruited him.

Queen eventually split with the Herrings around the time he met Tichy, who’d relocated here from Orange County, Calif., with his family. Tichy had already met Harvard at a show, and they approached Queen with the idea for Vincent, a concept that Tichy had developed years earlier in his West Coast house-party days. He’d been frontman of a guitar-bass-drum lineup there that went by the same name, and much of the new incarnation’s material began as original Vincent handiwork.
Queen chuckled at the band’s baby-steps into the Fort Worth scene: the way Tichy uses head signals or simply starts playing a riff if the other two are unsure of the set list. For The Moon gig, Harvard showed up with a “baby” drum set: just a snare, a kick drum, a cymbal, and a high-hat. From the reaction the band received at its debut, though, the sound didn’t suffer.

Right now, the Vincent boys are saving up to record a debut EP in Denton and are planning to play more shows in Fort Worth and Austin. Queen waits tables to pay the bills, and Harvard has moved to Denton to take classes at the University of North Texas, so the three musos are lucky if they can find time once a week to rehearse. They drive 40 minutes out of Fort Worth to a friend’s house to practice, because they don’t want to pay for a rehearsal space and also because, as Queen said, they find the drive “very cool and soothing.” The fact that band members spend much of their time apart buoys that calm vibe, too, he said. “A lot of bands are made up of best friends,” he said. “They live every minute together. When he, Tichy, and Harvard get together, he said, “we actually have new things to say to each other, new ideas to try out.”
For more info about the band, visit www.myspace.com/vincent.