The best bets this Valentine’s Day are two special-effects-laden fantasy films from Hollywood, both blessedly free of any pretensions to be the next Lord of the Rings. 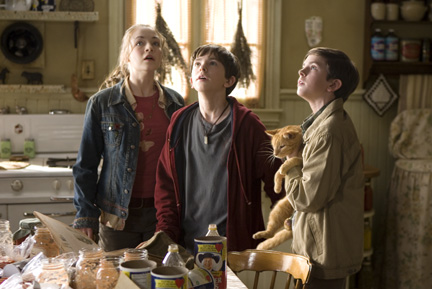 Jumper begins with 15-year-old Michigan kid David Rice (Max Thieriot) discovering that he can teleport himself to places he has been or seen. One of the first things he does with his power is run away from his mean drunken dad (Michael Rooker) and establish himself in New York by stealing a big pile of cash from a bank vault. Eight years later, David (Hayden Christensen) is a globe-hopping gentleman of leisure, but his attempt to woo his childhood sweetheart (Rachel Bilson) winds up drawing attention that endangers both of their lives.

Director Doug Liman and his screenwriters use Steven C. Gould’s science-fiction novel as a jumping-off point, and if that play on words is regrettable, so too is the way the filmmakers ditch the hero’s complex psychological issues and an Arab terrorism plot that would’ve felt quite relevant today. (The book was written in 1992, by the way.) Instead, David has to team up with a British jumper (Jamie Bell) to battle a boring operative (a bleached-blond Samuel L. Jackson) who’s out to kill all teleporters before they decide to use their powers for evil.

Christensen is at his best in roles like these, charming guys who have something they’re not telling you. Still, the DELETE doesn’t give him or us enough of a human element to give the movie traction, even with a nicely non-cuddly reunion near the end with his mom (Diane Lane). His pairing with the too-lightweight Bilson is a far cry from the pyrotechnics that Brad Pitt and Angelina Jolie brought to Liman’s last film, Mr. and Mrs. Smith. As for the action, there’s some fun with a jumper-vs.-jumper brawl that stretches across continents and another fight that has someone almost getting smooshed by a London double-decker bus that suddenly pops onto a sand dune in the desert. Yet none of these uses teleportation as creatively as an average episode of Heroes. Liman does his usual yummy-looking work, making every shot look like something out of a fashion mag and ensuring that this 88-minute lark goes down easy. You just want more when it’s over.

Not so with The Spiderwick Chronicles, which isn’t as smoothly executed but much more absorbing. Based on the series of five slim books by Tony DiTerlizzi and Holly Black, the movie stars a bunch of actors who bear a disturbing resemblance to the books’ illustrations of their characters. Freddie Highmore plays Jared Grace, a preteen whose newly unattached mom (Mary-Louise Parker) has been forced to move them into her family’s abandoned ancestral home, along with Jared’s dreamy, passive twin brother, Simon (Highmore again), and their older sister, Mallory (Sarah Bolger). Of the kids, Jared’s the one clinging to the idea that Dad’s going to come back to them, which is probably why he’s so angry all the time. He’s quickly distracted from his anger, though, when he discovers that the new – or rather, old – house is infested by fairies and less benevolent magical creatures who want to get their hands on the field guide that describes the fairy world, written by the Grace siblings’ great-great-uncle Arthur Spiderwick (David Strathairn). When Jared finds the book, he and his family become targets for a demon who wants to conquer the world (voiced by Nick Nolte and briefly played by him when the demon takes human form).

Highmore continues to impress, once again displaying his nearly spotless American accent (the same goes for Bolger, the Irish actress from In America) and locating the neediness that underlies Jared’s fits of rage. This is a PG-rated film, but director Mark Waters takes the gloves off, composing moody shots filled with shadows and staging various attacks by goblins with a ferocity that will scare the pants off the smaller kids in the audience. The delicate CGI-created sylphs and nymphs are balanced by the oozing, crassly funny character of a hobgoblin (voiced by Seth Rogen), who allows the Graces to see the fairy world by spitting in their eyes.

None of this, though, does as much for the movie as the skillful intertwining of the magical story and the domestic drama about the breakup of the Grace family. There’s real vitriol flying around, between Jared blaming his fraying mom for Dad’s leaving, Mallory constantly taking Mom’s side against Jared, and even Simon flaring up at his twin after Jared almost gets him killed. With all the psychic wreckage here, murderous goblins just seem like a natural addition to the landscape, though you know the family will pull together when the big climactic assault comes. The movie’s dark patches keep it from turning sugary and give it an unexpected power.