Is there anything better than wailing on someone with a foam stick? 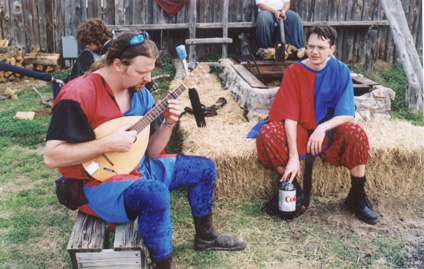 Not even close, at least according to most members of Emerald Hills, a local branch of the gaming group Amtgard that began in the 1980s and is still going strong. Yet unlike live action role players (or LARPs) or other groups like the Society for Creative Anachronisms, Amtgard is more focused on combat, less historically accurate, and far more casual. Members can be seen wearing sunglasses while dressed in homemade steel armor.

The organization began in El Paso and has now spread to a membership of over 10,000 worldwide, not the least of which are the 300 in North Texas. The members of the local chapter or “kingdom” – the Emerald Hills – got together with two other kingdoms from Austin and Houston last weekend to collectively hold each of their midreigns (or large group meetings) and a tri-kingdom midreign at historic Old Fort Parker, just south of Mexia, to celebrate the Emerald Hills’ 20th anniversary – and also show what Amtgard is about.

It’s mostly about having fun, socializing, and beating the ever-living hell out of one another with swords, shields, spears, and bows and arrows. Not real ones, of course. Most of the weapons and shields are made out of handles wrapped in foam and decorated with cloth covers. Amtgard has its own set of rules: One hit to a shoulder with a weapon renders the arm useless, a hit to the abdomen kills, and there are no hits made to the head. But even with the rules and foam weapons, that doesn’t mean the players hit any softer.

“It’s paintball with sticks,” said local member David Hall. Other members view it as a “release,” including one who is a high-school counselor. But there are also role-playing scenarios and theatrics, including names or aliases, and the centerpiece of any midreign, “the court,” where everyone dresses up in their fanciest apparel, dines, and partakes in the ceremony, full of knightings and awards. At the recent midreign, one knight from Emerald Hills was knighted with a fourth sash in service to Amtgard, something only 11 other knights in the entire Amtgard organization have achieved. 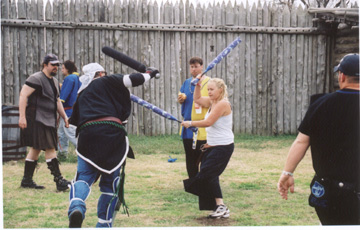 But the big event of the weekend was the siege of Old Fort Parker. A wooden gate was built in front of the fort’s real gate, and all the members were divided into three groups: One would take a turn defending the fort while the other two would try to break the gate down, invade the fort, and capture the flag. After three sieges, members slunk off to their tents that dotted the camping area and prepared for court, which was held inside the fort.

Overall, things went well, if attendance was lower than expected. Haven Riney, a member of the Emerald Hills, said that “Things went smoothly” and that the poor attendance was probably due to the weather and other major events being planned in the coming weeks for each kingdom. But while there were less Emerald Hills members than expected, the ones there definitely put up a fight. Brennan, an Amtgard member who, while from North Texas is unassociated with any kingdom, and who set up the entire meeting, said there were no plans yet for the next midreign. But Sarah McReynolds, who works at Old Fort Parker, said, “We’re happy to have people here,” even warriors.