Nobody tooted this city’s horn like Amon G. Carter, the wealthy founder and publisher of the Fort Worth Star-Telegram, a guy whose political connections helped lure government contracts for the city’s defense industry and whose distaste for Dallas fueled a longstanding rivalry. 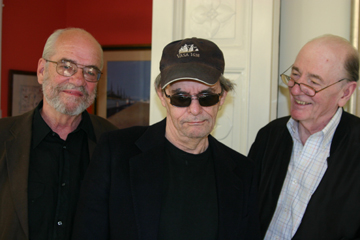 His image – cigar in hand, Stetson perched atop his head – is familiar to anyone who’s lived here awhile. A portrait of Carter hung for ages at his namesake museum, much to the dismay of daughter Ruth Carter Stevenson, who described its likeness as “gawdawful.” That portrait was replaced recently with a loaner from the Fort Worth Club, but that painting’s days are numbered as well. Stevenson has commissioned local artist Scott Gentling to paint her dad’s portrait based on a photo chosen by her. The approximately 30-by-40-inch oil on canvas portrait might be ready to hang by late summer. “It may take a while,” she said. “I’m in no hurry, I want to get it right. A lot of people come in the museum now and want to know who Amon Carter was, and we decided it would be wise to have a really good portrait of him.”

Gentling is still getting used to working alone. For most of his life, he painted in tandem with his twin brother, Stuart, who died of a heart attack at 63 in 2006. Although Scott was considered the better artist and Stuart the better businessman, they sometimes worked on the same paintings. In recent weeks, Gentling has been preparing for an art show at his Westside gallery, The Studio. Now he’s shifting focus to Carter. (For more about one of Gentling’s recent art-related events, visit www.fwweekly.com.) “Scott is so brilliant,” Stevenson said. “His genius is unbelievable. I’ve known him all his life and … every portrait I’ve ever seen that he’s done is absolutely wonderful.”

That talent prompted Laura Bush to choose Scott Gentling to paint then-Texas Gov. George W. Bush’s official portrait. At a 2002 unveiling of the painting at the state capitol, Bush drew laughter when he referred to the artist brothers as “a little odd” but “really good at what they do.” Scott Gentling was the primary portraitist, creating fetching images of primatologist Jane Goodall and painter Andrew Wyeth. Together, the brothers designed the sky mural for the dome at Bass Performance Hall. Fort Worth Weekly featured the Gentlings in a cover story (“Painters to the Court of George II,” Feb. 4, 2004).

The talented twins achieved fame and notoriety in the 1970s as well-schooled, well-traveled, eccentric, and appealing painters entrenched in Fort Worth’s social scene. Of Birds and Texas, a book they self-published in 1986, weighed in at 47 pounds, sold for $2,500 a copy, and was partially funded by wealthy patrons who saw the brothers’ immense talent. Stevenson and the surviving twin didn’t necessarily agree on what the Carter portrait should look like. A Stetson and cigar seemed apropos to Gentling. Stevenson wanted neither. The newspaper magnate’s daughter is no shrinking violet, and, in this case, the person holding the purse prevailed. Asked if Carter would be shown in his trademark Stetson, Stevenson replied, “Hell, no.” “He didn’t always wear a hat,” she said. “He was photographed in a hat, but if he was in an elevator and a woman came in, he removed his hat. It’s good manners. I like the way his head and face looked, and I don’t want to cover them up with a hat.” 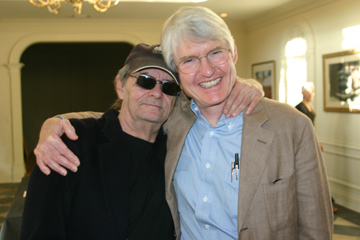 Carter stopped smoking cigars in the 1940s when Amon Jr. was shipped overseas during World War II, and the painting will reflect that life change. She envisions a portrait of Carter sitting down, wearing a suit and tie, shown from the waist up, and wearing a slight smile. “I don’t want him looking grumpy,” she said. In his hand she wants a Star-Telegram, but one circa 1950s, back when “Fort Worth” was clearly emblazoned on the banner – “and not what it look likes now,” she said emphatically. Gentling will work at his own pace, and Stevenson didn’t want to guess at a completion date. “I’m not about to go prowling around over there and breathing down Scott’s neck,” she said.

Click The clink Below for an online exclusive about the featured artist.