Willie Nelson has been my hero since I was a teenager. 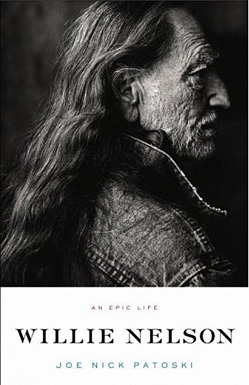 Throughout the 1970s, I went to about two dozen concerts, bought countless albums, and read books, magazine articles, liner notes, and just about everything else out there on this iconic Texan who wrote like a master and lived like a mystic. (For proof of my reverence, read “Poet, Picker, Prophet,” May 1, 2003.) While Nelson’s wild life has spawned dozens of unauthorized biographies, none have proved particularly insightful, and they all tend to trot out the same suspect stories. Everybody’s heard a million times how Nelson’s first wife, Martha, sewed him up inside bed sheets while he was passed out drunk and then beat him with a broom. (Even when I was a kid I didn’t believe that one – who would take the time to sew another person up in sheets? If he were passed out drunk, why would you even need to?)

And the legend of a despondent Nelson lying down on a Nashville street, hoping to get run over by a car, sounded more yarn than truth. Willie’s never let the truth muck up a good story, and numerous biographers have rehashed tales told to gullible music writers, even when common sense and intuition waved red flags. I always looked at Nelson’s life and figured the truth would be plenty fascinating and instructional. He grew up poor, hit it big, battled booze and hard drugs. He advocates for legal marijuana, farmers, wild horses, bio-diesel, and many other causes. He has been arrested and jailed, found himself in hock to the government for $16 million, hung out with presidents, acted in movies, made love to famous women, married four times, fathered seven children … geez, why pad the story with tall tales?

So what a joy to discover An Epic Life, Joe Nick Patoski’s comprehensive look at the man’s life and career, chock-full of unfamiliar anecdotes and with a stricter eye for the truth. Nelson’s life has been such an open book it’s surprising to see this much new information coming out at this stage of the game. For instance, Nelson’s affair with actress Amy Irving during the making of Honeysuckle Rose is no secret, but it’s not well known that Willie was the one who got dumped, and, even though he was well into his 40s, sobbed openly in a New York alley after being treated callously by the future Mrs. Steven Spielberg at a party.

Many writers through the years have described how Nelson was turned on to marijuana while living in Fort Worth in the 1950s – it’s the story Willie has always told. But Patoski has unearthed a surprise: During an interview for the book, Nelson confirmed that his first joint as an adult was indeed enjoyed in Fort Worth, but he had unknowingly tried it years before – a country doctor had prescribed marijuana to his cousin to help with asthma, and the boy once shared his medicine with a 10-year-old Willie on a creek bank.The first two-thirds of the book are the most fascinating, spotlighting Nelson’s childhood and his early years on the road with a bunch of wild-ass musicians, squeezed into station wagons and pickups and hauling rickety trailers from town to town, barely earning enough to survive. And there are juicy details about his recording sessions with his first major record label, RCA; the odd communal living arrangements at his house in Ridgetop, Tenn.; the $4,000 recording session for Red Headed Stranger in Garland that catapulted him to fame; his ill-fated relationship with Armadillo World Headquarters (the hippies who ran it didn’t like Willie’s redneck crew members carrying guns); his courtship with Lone Star Beer; the chaos surrounding his early Fourth of July picnics; and his IRS battles. Patoski also does a succinct job of characterizing the singer’s loving but strained relationship with Waylon Jennings. (No surprise: A mellow pothead and a paranoid coke fiend don’t always see eye to eye.)

An Epic Life starts off slowly as it moves backward from Nelson’s childhood to explore his ancestors’ Arkansas roots. But the book quickly plops readers in that drafty frame house in Abbott and describes how Willie forsook life as a dirt-poor farmer for an even more uncertain career as an itinerant minstrel. Patoski is a Fort Worth native and gives splendid detail about Nelson’s years here spent selling vacuum cleaners and Bibles door-to-door while working in radio and getting established as a performer in the seediest Jacksboro Highway joints and Stockyards saloons. Patoski tries not to rehash tired old tales, and when he does cover territory already discussed in books such as Nelson’s 1988 autobiography, he talks to other witnesses and makes the stories three-dimensional. The book even mentions a couple of Fort Worth addresses where Willie lived in the 1950s. (See www.fwweekly.com for “A Willie Nice House,” an online exclusive about the houses and the people who now live there.)

Crazy musicians playing gigs for anybody who will listen and plenty who won’t, and ping-ponging between being between fat and happy, broke, high, drunk, violent, exhausted, ecstatic, and melancholy, all while struggling to get paid at night’s end, make for fascinating reading. The book could have explored more deeply the Hollywood years and Nelson’s friendships with Robert Redford, Jane Fonda, James Caan, and the like. But, overall, this book in many ways tops the musician’s own autobiography for explaining what makes Willie tick.

Epic Life falls short in only one respect. Most of the book’s 27 photos have been published before, although Annie Leibovitz’ brilliant portrait of Willie makes for an eye-catching cover. Patoski, who spent 18 years as a staff writer for Texas Monthly, has been writing about Nelson and Texas Music since the early 1970s, and his familiarity and respect for his subject has paid off richly in these 500-plus pages, with a release date timed perfectly for Willie’s 75th birthday on April 30.
You can reach Jeff Prince at
jeff.prince@fwweekly.com.

For an online exclusive related to this story please click the link below.